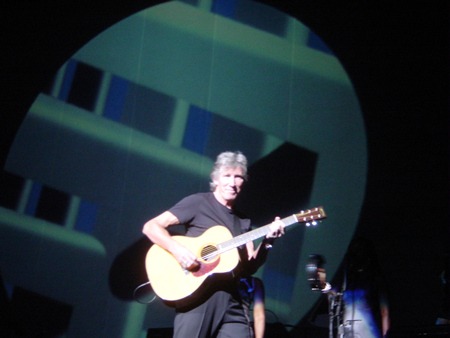 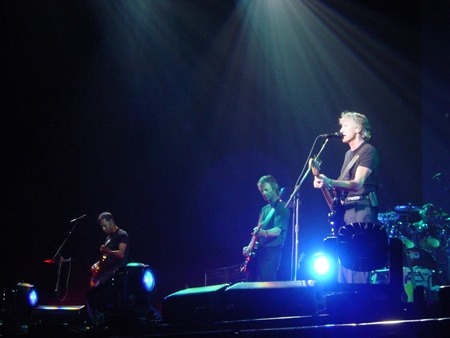 An Evening With Roger Waters
Sydney Entertainment Center – Saturday April 6th 2002 Roger Waters In The Flesh 2002 world tour played three concerts in Australia, among which two were for Sydney, and one was for Melbourne. The promoting campaign in the papers, and TV has only highlighted song titles from The Dark Side Of The Moon, and The Wall. This is the first tour for Roger in Australia since August 1971, at which Pink Floyd played one date for each of Sydney, and Melbourne.

The following is a review of the second Sydney concert on Saturday April 6th 2002.

My impressions, and observations were penned down throughout the three hours long concert. They reflect the very feelings, and thoughts that took place while witnessing a show played by one of the most innovative, and conceptual composers of our times.

The overall sound was excellent. Vocals, and Instruments were all well defined. A feeling of the three dimensional sound was imminent as sound engineers used centre hanging speakers to distribute the Keyboards sound and Vocals. This also created a rich texture of melody around all other solos, and sound effects. Now let’s go through the concert itself.

· In the flesh comes on the top of the set list , and the perfect start of a powerful rock act to follow.

· Mother – with its crystal acoustics – had an enormous impact. I believe we then started to feel the magic of Roger’s voice and lyrics. 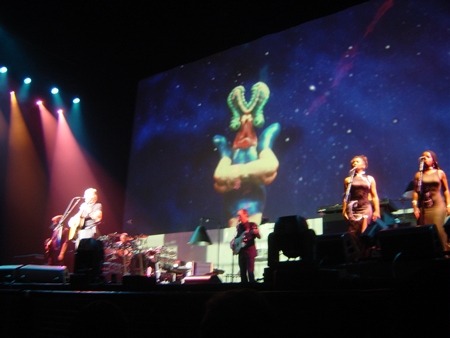 · On Dogs, Roger played his bass, with Andy Fairweatherlow on acoustic guitar. The two moving together to the rhythm. It was interesting also to see both of Snowy White, and Chester Kamen doing the guitar solo riffs together note by note in the same time. Therefore the notes were coming out very bold. This is a complex song, it will be remembered as a highlight of this night. The Keyboard’s notes were just perfect . Beautiful job from Harry Waters, and Andy Wallace. While the keyboards solos were going on together with percussion, the four guitar players took off their guitars and sat around a green table, played cards and had a drink. So did the three vocalists. Soon guitars were put back on for a strong strumming and the second part of the song. Perfect. While looking at Terrance ” Snowy ” White doing his solo here I remembered the documented Floyd rehearsal session when he was brought in to support The Animals Tour of January 1977. By then He had not yet heard of The Dark Side Of The Moon.

· Syd Barrett photos, and also early photos of the Pink Floyd were showing on the back screen. They were carefully selected for Set Controls For The Heart Of The Sun. Roger played his acoustic guitar, it all came out as the original in the LP A Saucerfull Of Secrets of the Nice Pair Double Album. Amazing how even that tone from the Synths of Harry Waters.

· As roger completed the words ” For the heart of the sun “, the first Synths notes of Shine On Crazy Diamond started. ” Remember when you were young ” pulled us back nearly three decades to wonder how the years have gone by! I was carried away with the lyrics. The guitar original notes were coloured here by the band current players. This one will allways be compared note by note with Mr Gilmour’s original stamp.

· A very low frequency sounds of machines brought in the start – of a slightly different vocal arrangement – of Welcome To The Machine. Roger played the acoustic guitar, remarkable vocal dialogue is noted here between him and the three female vocals. Wish You Were Here followed with chester kamen starting the 1st notes on his electric guitar, Snowy white answered here with his accoustic guitar.

· A bright silver shiny diamond started to raise up in the rear side of the stage while Shine On Your Crazy Diamond parts 6-9 , This concluded the first set of the night.

· With his full left hand covering on his bass – Palm muting – Roger calmly started hitting the Time watch ticking notes. Ah’s and Oh’s went loud when we saw the very nostalgic light prism on the black cover of The Dark Side Of The Moon LP. Again the same has repeated when seeing the very record being played on the turntable on Money. How can we forget the sound track of our lives! Andy Featherlow burst out an electric solo prior the song’s final solo done here by Chester. The saxphone’s solo by Nobel Stacher was a thrill. Nobel played it with total authority. While leaving the stage his sound was also going far away with him.

· Stranger Eyes started a different section in the concert. Splendid vocals arrangement and the most meaningfull lyrics that we would ever come across. A Miracle is a masterpiece from his 1992 album, great voice and emotional singing from Roger and the three girls. Perfect Sense is a magical Rock Theater Act .

· We here realize the full extent of Mr Roger Waters genius musicianship and composing talent. Watching the deep expressions on Roger face is unforgettable. Simply he deeply feels his work. A picture of war victims names on a plaque is there while he is ending Amused To Death.

· The public enjoyed a sing along with the band for the Brain Damage, and Eclipse – where the moon has virtually eclipsed the sun on the big screen. Comfortably Numb gave us a little taste of the original The Wall act. Roger singing, while walking from one side of the stage to another. We also, all sang with him this great classic. The final guitar solo was done by Snowy, and Chester going on top a small WALL on the very rear end side of the stage. On the other side The keyboard player Harry Waters, he also took up an acoustic guitar to add up anther layer of chords. This is an epic classic, I wonder if it was the same had it been produced otherwise through The Wall sessions.

· Roger Waters mentioned the long journey he is currently doing to Sydney, and thanked people for coming. He then presented the last song for the evening, he called it a song for love and freedom. Flickering Flame is a new composition from the upcoming new album. It ends up the show with the words ” We Shall We Be free “and on a clear optimistic open C chord.

· An Evening with Roger Waters is a serious music experience. Throughout the concert I was moved by Waters full concentration and perfection. Roger’s excellency kept the thousands to listen with attention, to admire and to clap only at the end of each song. There was an enormous sense of respect for his very intelligent work. This is the way Roger Waters has allways wanted and certainly achieved.

Thanks to Hesham Attalla

Tonight’s show was just as good as last night’s. The set list: identical. Chester Kamen was again brilliant on ‘Dogs’ (and everything else for that matter), PP Arnold sent shivers down my spine, and Roger, although not as excited as last night, still appeared to be enjoying himself. ‘Every Stranger’s Eyes’ was brilliant, as was ‘Perfect Sense’ again, but the highlight for me was ‘Comfortably Numb’ – the band was really ‘together’.

Before the show a few of us got the added bonus of watching some of the rehearsals (due to an open door and some incredibly unobservant security). It was Parts 8 and 9 of ‘Shine On’, mainly consisting of Roger saying ‘can we try this’ or ‘I don’t think we need that’, and Graham Broad asking the tech to turn the snare down on his monitor, but non-the-less very interesting. One more to go, and that’s in Melbourne on Monday, until then Shine On.

Thanks again to Mark Jensen 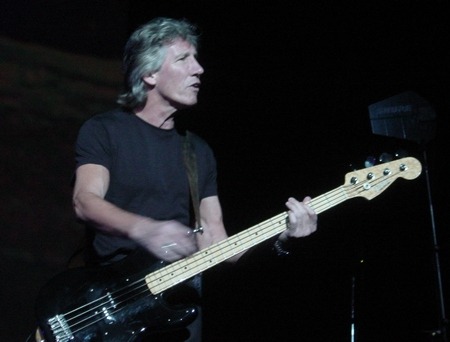 I think Tim was right when he said the second show was better. I felt it was produced a little funny sound wise on Friday.. although friends in the fourth row swore it was perfect (I was first elevation on the side). I had the second row on Saturday and it kicked some serious ass!!! Roger was only about 10m away and when he came around on the right he was only only about 5m away. Anyway some of the highlights of the show were songs that I thought would be a bit plain. Absolute killer versions of Set the controls for the heart of the sun and Welcome to the machine. Both of these songs had the drums come in for an awesome jam. I was blown away. Nice version of Dogs too.. over all it was an awesome night, even the solo stuff was great..I mean i’ve only heard (own) +/-HH really and have heard just bits of other stuff of his but really liked it live.. i like that song with ‘oooohhh… western woman, oooh.. western girl’.

During Comfy Numb which was just a mind bending experience to see live..when Roger sang: ‘..you would not understand, this is not how I am..’ I swear he pointed at me.. maybe he liked my DSOTM t-shirt #8^)

The guitarists where great.. I felt they held back a bit on the first night.. seemed like they were not wanting to be Gilmour copies.. but on the second night (and overall) I was very happy with what they did.. they are world class.. the whole show was great..

By the way at the end of the Sat show, says Rog: “Thanks for coming out to see us, you’ve made a long trip very worthwhile.”, he flicked his guitar pick into the crowd and then signed some person’s autograph book.. nice guy that he is, eh? 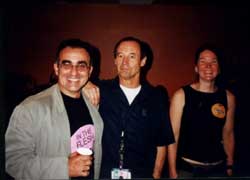 Andy Fairweather-Low enjoys the after show party with Hesham Attalla 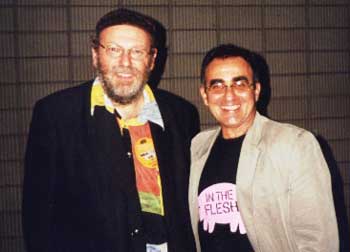 Hesham again, this time with rock historian Glen A Baker 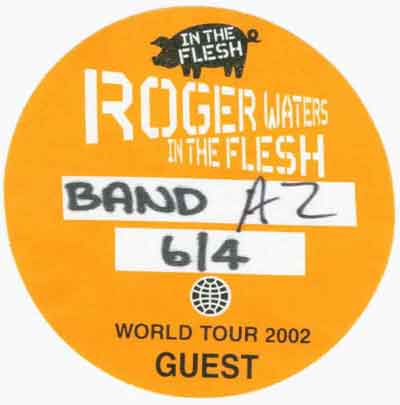