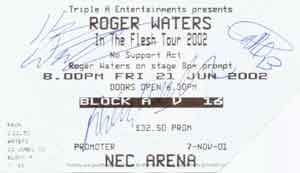 Signed by Graham Broad, Andy Wallace and Harry Waters. With thanks to John E

A rapturous applause welcomed the man himself on stage. His first show in his home land in God knows how long!!!!! Although the lights were down you could easily make out a figure in black, carrying that familiar bass, making his ascent to the centre of the raised stage platform to begin the show. As he walked up the steps he knew he had been rumbled and acknowledged the crowds wild cheers with a raise of his arm, to which the crowd replied with even more gusto! The familiar German count in to the intro of ‘In The Flesh’ soon bellowed throughout the hall and, already, I knew we were in for a hell of a show and Roger and co certainly didn’t disappoint!! An absolutely amazing, flawless show from start to finish. Rogers placement of so many Floyd songs on the bill soon comes across as not an attempted at personal name recognition or self-gratification, but as a genuine celebration of this extraordinary many and the wonderful music he has created over the years. Set list, and review, follows:

In The Flesh- Cracking performance, the ‘coons’, ‘queers’, ‘jews’ all positevely revel in being the ‘ones in the spotlight! ‘The Happiest Days Of Our Lives’- Always a favourite, I’d love to have seen an appearance of a puppet or too!

Another Brick In The Wall- A great, pumping version. My only complaint is that the only played one solo at the end! I am a great Snowy fan and have been waiting to hear him play, but never mind! They make up for this by ending with the album dialogue (“wrong, do it again…!” and so on), rather than a reprise of the verse, which I always thought sounded a bit naff!!

Segue straight into…Mother- A spotless note for note version of the album version.”Thank you very much, welcome, good evening” He says, seems in a good mood!”Get your Filthy Hands Off My Desert/ Southampton Dock- Two good versions, I’ve always been one of the few to rate The Final Cut as a Great Album but I also believe that there are better songs on it than these two! A great theatrucal moment at the end, though, with the projector lit up by thousand of poppies before fading to the Animals cover for…Pigs On The Wing- I love this song, after dogs he should play pt2Dogs- Enough said, a great song, a great performance, Kamen is not as good at the intro a Carin though but, still, it’s a great performance and very highly charged! I wish I’d seen the original animals tour (it’s my favourite album). Waters Jnr is great on the synth parts and it’s a fantastic tune.

Roger and Andy in good fooling as the do a little dance together on the dueling guitar parts!Set The Controls- Another great performance. Snowy plays a great solo!!! He’s the man, but why ain’t he using his Les Paul?

Shine On- They play every last note of this song. The whole entire version of the the first half of Shine On and it’s amazing, to hear that keyboard inrto and the main guitar phrase booming out across the arena is a sound I’ll never forget!!! Brilliant!

Welcome To The Machine- This was great. The vintage footage was something I’ve always wanted to see.Wish you Were Here.- A beautiful rendition, the whole crowd singing along with Roger. Lumps in throats all round! I think the sound effects team screwed the ending though. As the last notes were fading out I knew that Shine On part II was on it’s way but most people stood up to leave! The howling wind noise, when everyone realised to sit down again, was barely audible and it made the bass notes intro sound a bit weak but never mind!

The audience settles down to enjoy…Shine On part II- Once again, they play every note of the album version and it’s amazing to hear. The mirror raising at the end to shower the arena in pin pricks was an amazing sight to see I can tell you!!

At this point Roger thanks all. “Well thank you, thankyou very much. We’ve been on the road since february. We started in South Africa and we’ve been all round the world and it’s great to be home. Thankyou. We’re going to take a short break then we’ll be back with another set so we’ll see you in a few minutes.”

We were only just in our seats when the lights dimmed and a familiar heart beat boomed out across the arena, I would’ve thought that would have given a two minute warnign or something cos so many people missed the first number.

Speak to me/ Breathe- What can I say, brilliant versions. Dare I say it, it would’ve been great to hear Dave singing but we all should know by now that’s NEVER gonna happen!!!! I heard once that Dave invited Roger to play Dark Side with them at Earls Court in ’94- how great would that have been!!!

Time- A very well deserved round of applause to Graham Broad, he’s a fantastic drummer and kicked Nick Masons ass at the intro!! It’s a great song but I don’t think Roger should sing it.

Breathe (reprise) as above

Money- Sch-shing! It’s a cool song and they really do it justice, Andy Fairwether Low really hams up his part but, I didn’t realise till the last second was that I’d been robbed of another Snowy White solo opportunity- darn!

Every Stranger’s Eyes- This was a really good version and so well recieved be the audience upon it’s opening notes. I really wish that Roger would have put more solo stuff in. Pros and Cons is a great album (KAOS was, shall I say…next) and Amused To Death is better Floyd than the post-Waters Floyd have come up with yet! I’m so please that he didn’t mine the ‘from where I stand’ part! He’s 58 (or thereabouts) no expects him to be able to hit the highs spot on anymore!!! It was such a great climax to a great song.Perfect Sense I & II- Another bummer by the SFX people as we never hear the reverse shouting that intros the start of this song. Maybe it was where I was sat though (round the far side). I couldn’t wait for this stuff. I love ATD. I wish that he’d played the whole album as the second half like he did with the Pros and Cons tour or KAOS but, hey, who am I to complain! Part II was incredible! Every sang along the intro with Roger and it was fantastic to hear such recognition for his solo stuff. A fantastic moment in the gig.

The Bravery Of Being Out Of Range- A good outing but not my favourite choice of song. I can’t believe he bumped What God Wants for this one.It’s A Miracle- I love this song. A fantastic tune and a fantastic performance. Snowy’s part at the end was a great climax- why is his Les Paul Gold Top still left un-used!!! How frustrating!

Amused To Death- Fantastic. To hear that “6 or 7 or 800 dollar” banging away, so loud and so clear! The sound to the whole gig was remarkable! It’s been said many times!!! You could hear a pin drop when Alf Razzel was telling his story at the end. Another lumpy throat moment!!

Brian Damage/ Eclipse- great versions of these two but nothing new to the DVD version. I think they just play these cos they believe people want to hear them but I would rather have heard What God Wants, Too Much Rope or Three Wishes. More solo stuff next time please Roger!!!!

Comfortably Numb- Amazing, a super charged version that sounds so LOUD and yet with crystal clarity! It was fantastic and, AT LAST, Snowy appears clutching his Les Paul ontop of the ‘Wall’ again and both he and Kamen put on a super charged powerful solo!

Flickering Flame- I really like this song and I’m glad they played it cos I wanted to know how different it sounds to the demo version on his solo greatest hits! Answer, not much!! Just more musicians joining in! It’s a lovely song and so nice to hear Roger not bashing politics over your head!!!All in all a fantastic show, which I have to say, I have on very high quality bootleg!!!!!! mail stephoflet@hotmail.com for a copy (£25). The sound quality is incredible-just like being there.

With thanks to Steve Fletcher

I went to the NEC concert on Thursday and am going to Wembley next Wednesday and Thursday to see the Great Roger – whose work I admire.

The band was great – so were the backing singers. The sound system was OK though I doubt any of the principals had actually listened to it from the auditorium. From my seat the sound was amplified to the point of distortion, and A F-W-L’s party piece, which was so enjoyable on the DVD, was just a mess.

The screen was big, but the video content disappointing – maybe Roger should get advice from Dave Gilmour and Co whose concert at Earl’s Court was stunning in that respect.

Thanks to Leonard Denton

With a mammoth three hour set, he’s now at ease with his extensive back catalogue and finally able to lay some old ghosts to rest. The fact that the lion’s share of the set was drawn from the Floyd years, albeit much of it drawn from the later time when he was safely at the helm, was reason enough for the drooling reception he received.

With a tight band which included his dreadlocked son on keyboards, this was a slick show and choreographed to the second.

As was to be expected, superb projections, lights and a stunning quadrophonic sound system allowed maximum resonance to be wrung from the songs.

Dressed in a sharp black suit, Waters looked every inch the company director as he launched into the riff of In the Flesh Part 2, the opening part of the show being a romp through The Wall. A brief reprise from the unjustly maligned Final Cut and we were into the meat of the show.

Pink Floyd’s trilogy of Dark Side of the Moon, Wish You Were Here and Animals are the works which made them global icons and the band were more than capable of reproducing the prog dynamics.

Close your eyes and you could almost imagine Gilmour, Wright and Mason back on stage for the superb Shine On You Crazy Diamond. Dogs, from Animals, was the longest track of the evening, allowing the keyboard players to show their mettle.

Biggest cheer though was for the Dark Side of the Moon segment after the interval. On a purely artistic level, the tracks from Waters’ Amused to Death album really came to life on stage, the night’s highpoint being Perfect Sense. The reputation remains intact. 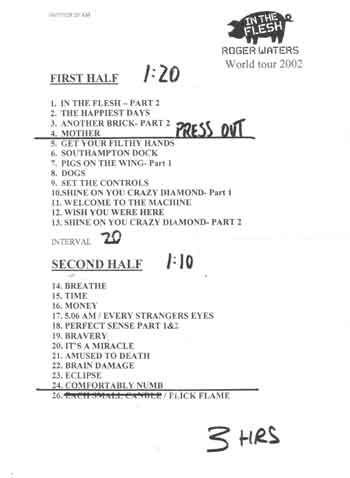 Official set list as used by the band. With thanks to John E