So after both the Moscow and Norway’s shows I’d heard a lot of talk about the “extended wall” that had been used at said shows. Id missed Moscow due to not being able to get a Visa in time and missed Norway due to being in the USA. Id watched videos on YouTube of the Moscow show and had seen how much bigger the wall actually was but nothing had prepared me for what it actually looked like when i saw it in person last night in Copenhagen!

The venue was a football stadium with a retractable roof and the capacity for the show tonight was somewhere around 45,000 people! the size of the place was immediately evident as we walked through the tunnel onto what was normally used for the football pitch. It was massive! the rear seating section looked like it was nearly quarter of a mile away from the stage, and the stage itself was about half as big again as it usually is! i say the stage but i mean the actual wall itself.

The normal portion of the wall made up with bricks was extended at either end with boarding that was made to look like bricks but was a huge painting/printed effect and at the far left of that section was a huge camouflage type cover extending it even further!

The show started at 9pm tonight so it was gonna be a late finish, could have done without the late start as i had to be up at 5am tomorrow to catch a 7:30am flight back to London. The band came on around 9:05 and i noticed one of two things.One, the sound whilst sounding great quality just didn’t seem loud enough for a venue this size and the pyros and effects for In The Flesh seemed lost, again due to the size of the venue. This just confirmed what I’d heard in that if they were to do this show in the South American outdoor stadiums as they are saying they are going to then the wall does indeed have to be twice as high and twice as long, which is something they are working on right now!

What i also noticed was that for the first time they were projecting the “actual” show onto each side of the extended part of the wall! Something didn’t look right to me though and within 60 seconds it became obvious (to me) that the show they were projecting onto the wall was NOT the actual show we were watching! It was very clever how they had done it but it wasn’t live, it was a fully edited recording from an earlier show! At first i thought the differences were due to a time delay effect but it then became clearly evident that the roger we were seeing on the stage live was not doing the same things as he was on the projected show! I’m pretty sure 99% of the audience were fooled but not this gig goer!! obviously as the band work to a click track and Roger being the gluten he is for the same nuances every night and his perfection for timing the show is more or less the same each night.

The crowd were far more lively than the previous two nights in Stockholm, i didn’t expect anything less to be honest, i don’t think it was possible! Standing at the shows makes all the difference to the crowd and there were apron 30.000 people standing on the floor tonight! (the total attendance was 47,000!)

Kevin, Phil, Lila and i watched the first few tracks from the second row to the left of the stage, i then decided to make my walk half way back to see the effect of the extra wall and the video projections. Its amazing the difference when you see this show from half way back and tonight was no different, the video they were projecting on the sides looked fantastic!! they had even reversed the video on the right side of the stage so it looked great when you saw both sides together! I had to laugh as i watched One Of My Turns as i knew the video that was being shows hadn’t been filmed recently just due to some of the things i saw and i wondered what the crowd would think when they saw Roger on the video standing up singing but onstage sitting down on the chair that he’s now been using, well guess what, the chair came out onstage but he didn’t sit on it!

I made my way back down towards the front and met Kevin on the way, he was coming to the rear to see what it looked like, we both headed back and he was totally blown away by how it looked from further back.I did notice that Roger has now added the golden arch symbol of Mc Donald’s to the dropping symbols from the sky during Goodbye Blue Sky! haven’t noticed that before and think its the first show he’s done that,

The part where the wife comes down and the wall turns green looked amazing tonight, the wall just looked to go on for ever! 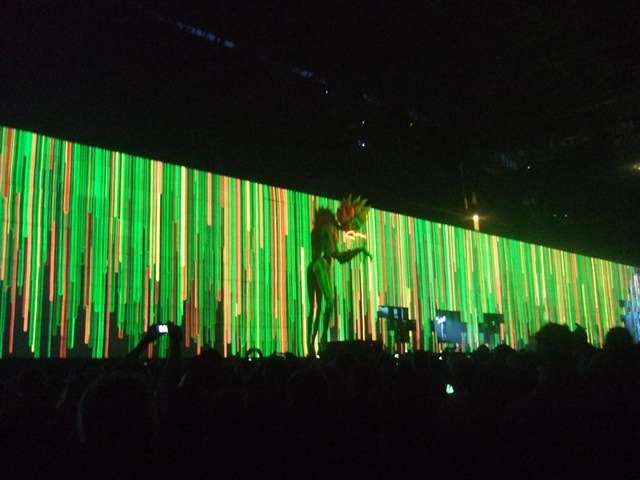 After intermission Phil and i managed to make our way 2nd row a lot nearer the centre, again at these shows even though they are standing, the people in Europe give each other room to move about and your not stood there getting crushed!

Seeing the huge wall gave a totally amazing aspect to Bring the Boys back home and especially the part in Comfy Num where the wall all breaks up, it was incredible, gave me chills just thinking what an even bigger wall would be like out in South America

The crowd were very appreciative of Dave’s solo during CN but the sound really wasn’t loud enough to give it that punch that was needed in such a big venue. The chant of “hammers, Hammers” came through the PA at the end of Run Like Hell and Roger tried the best he could to get everyone to join in but they didn’t, i think one of the problems of this is a lot of people don’t know what the word is they are chanting! The wall came down again all forward and there was lots of it! The band looked real happy Outside The Wall Dave K and Snowy especially having a good chuckle to themselves at Roger trumpet playing tonight as they do most nights when he plays a bum note or it sounds like he’s just warming up!

I really hope more people are able to experience a show with the extended wall, it really does turn this show from an amazing experience to a phenomenal one.

Above images & review thanks to Simon Wimpenny