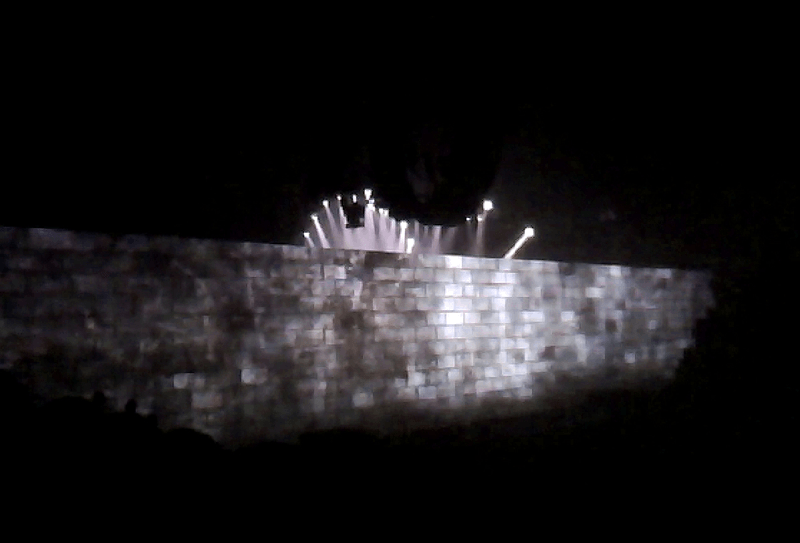 One of the things that offenses my personal freedom is organizing my life months in advance, by the cheapest flights I can find, by taking leave considering my colleagues’ schedule or by buying tickets for large concerts which are sold out fast. Ironically, one of these concerts happened to be Roger Waters: The Wall, which I had to book one year in advance, so that I can be among the 13 500 people on the evening of May 27 in Antwerp. On a Friday, because Saturday night was already sold out.

Although it keeps a strong classic key, this Wall cannot be compared with Pink Floyd’s performance of 30 years ago, nor with the even in Berlin. And this despite the fact that “Hey You” is still sung behind by a complete wall, giant inflate puppets still dominate the room, the pig still appears in “Run Like Hell”, the animation is the same genius signature of Gerald Scarf, and yes, the wall is torn down at the end for the band to play “Outside the Wall.”

Those who have not got over their antipathy for Waters for trying to put and end to Pink Floyd, should reconsider as even at 67, his precision, professionalism and energy can be only admired. The projections are magnificent, the sound is impeccable and sound effects like gunfire or warplanes bombing make you look around to see where they come from and if not anything would blow up around you. As proof, any youtube, regardless of the filming device, has a very good quality.

Refusing to see any tour footage before going to the concert, I never expected such social commitment. There are moments when photographs and personal details (date and place of birth and death) of persons who died either in war or in civil actions are projected, in millimetric precision, on the bricks so that at half time each brick of the complete wall has a face, from military to women and children. The photos were received via a public call made by Waters on his website: Fallen Loved Ones. He uses also screenings of a footage made with a surveillance camera, in which civilians are killed. Childrens’ t-shirts from “Another Brick in the Wall” say “Fear builds the Wall”.

“Mother” was an acoustic performance sang by Waters along with the video recording of younger self in Earls Courts concert of 1980, but the “Mother” metaphor becomes the “Big Brother” metaphor with complementary projections representing a surveillance camera and the multilingual phrase “Everything will be all right!” written all over the wall. The aircrafts of “Goodbye Blue Sky” bomb with religious logos (David stars or crucifixes), the dollar (why not also euro?), Mercedes and Shell logos. On “Run Like Hell” the texts represent iPod-style phrase such as: iLike, iLead, iProtect, iResist, iProfit, iTeach and magnificent iBelieve.

Waters was not as creative for “The Trial”, preferring a complete projection of the movie and playing at the base of the wall, but in such good manner that if I were not aware what I was attending, I might have thought he is doing playback.

The Wall may have emerged from Waters’ desire of a barrier between him and the audience, but the show is full of interaction at all levels. The projections are scheduled so that the wall seems to react when it’s touched, the flying pig reaches the back of the venue flying over the public, and one could have not heard a clearer answer from the audience to “Mother, should I trust the government?”, in complete in agreement with the “No Fucking Way!” text on the wall.

Waters takes The Wall to another dimension, or better said, he brings it from the Pink Floyd dimension, with all the luggage from back then, towards what happens today in the world. What I felt was no longer a personal still universal story, but a global issue that concerns us personally. TRUST US.

Image & review thanks to ywannish