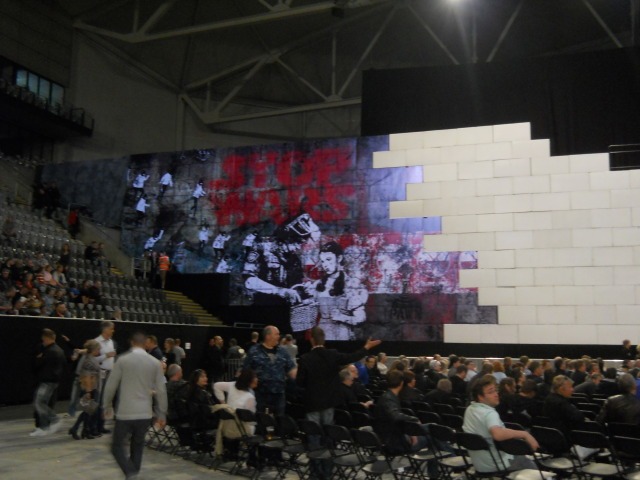 Bloody hell what a mixed experience this was. Indoor football arena and home field of one of the Norwegian Premier League’s top teams, Stabaek. Also Telenor being the state owned tele-company. Looks great form the outside, but once you get inside, this arena has “missed opportunity” written all over it, and is really quite small except for the football sized floor area. Ah well. Funny story: Don’t know about the terraces, but on the floor the only option we has as far as toilets went was an outdoor solution(as in right outside the arena) featuring an endless row of portapotties with matching endless queues, and a bunch of men’s urinals inside a sort of closed area with no roof. So with time runing low before show start I headed towards the urinals and went on with my business. As i’m standing there I look up at the arena in front of me, and see a bunch of VIP’s in the windows with a hell of a luxury view directly down into urinal city. Started laughing so hard I almost peed all over the place.

But back inside the arana, the set up was nice and the guards did their job well(quick to react when people were using flash photography or filming for extended periods of time).

We were seated around row 30 on the floor. Left of center. Great seats.

THE CROWD:
Typical Norwegian, yeah, but I for one really loved that – for instance – Comfortably Numb didn’t turn into a sing-along orgasm. Plenty of beer runs, but I’ve seen far worse, and in my section everyone kept their talking to a minimum.

THE SHOW, PART 1
(Moronic) Parts of the crowd got a bit antsy as the show startet a whooping fifteen minutes late. I was too busy looking around for Pink. No homeless guy, he just got dragged out on stage by some uniformed guards in the end.

“I’M SPARTACUS” got me riled up like nobody’s business, and to experience IN THE FLESH? in the flesh after so many months of anticipation certainly blew the roof off of my building. At this point I was a bit surprised that I was the only one marking out like a child. I’m really wondering how any show could possibly kick off in a more spectacular fashion than this.

Then I had my crash landing not long after the plane crashed. I’m a cynic and I’m a skeptic. If someone shows me a picture of a starving child or a dead soldier, my reaction is always “what is your selfish manipulative reasoning behind showing me these pictures then?”. I knew what was coming here – I had seen countless videos from every song as well as iShoot, iEdit, but there is no video out there that can prepare you for the images during The Thin Ice and especially the impact that massive guitar solo and the endless list of casualties projected on Mr Screen during it has live. I absolutely loved it, but it also froze up my body in a complete state of sombre emotion that I didn’t come back out of until the second half of the show.

The way the Another Brick 1/Happiest Days theme transforms from child tragedies to child play and laughter is magnificent. I love how the red color is maintained throughout, forcing you to keep an open mind in order to notice what’s going on.

Another Brick part 2 was fun, but I was still in my state and it’s a bigger song as part of a random set list than during The Wall anyway. Still really enjoyed it, and the local kids were ironicly hyper, in stark contrast to the subdued and polite crowd. Snowy White is so ridiculously awesome. I had managed to forget the ending with the London tube-murder-reference, so that was great too. Just mind boggling how well put together all this tragedy was. 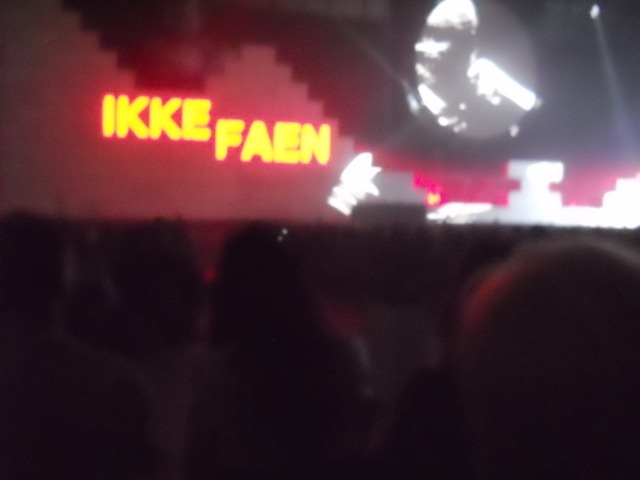 Mother… It’s really not an experiment any longer, is it Roger? But we loved it no less. Also, my entire row was wondering what the hell I was up to pointing my camera at the empty side of the Wall towards the end of the first verse.

Also, this was where my David Gilmour-obsessed MOTHER officially stopped worrying about that Wyckoff fella 🙂

One of the more popular ones during the night was Goodbye Blue Sky, with everyone in my section getting a kick ouf of the graphics, particularly the comercialism ones. Made sure to get me a bomber-t-shirt before the show.

Empty Spaces, to me, is more impactful when you watch the flowers(and the second part animation too) fill up your TV screen and/or the sound is a bit more powerful on the album-version. Still great, but part of what made part one a bit long.

Then we had Young Lust, another of the weaker songs, but I did have fun watching all the wives and girfriends with stern looks on their faces as their men stared at the biggest projection of breasts any of us had ever seen. One of the highlights of knowing what was coming, but also another bit of the dragging out-part, not least because I couldn’t see any members of the band by this point. One Of My turns is always great no matter what, and from there I loved how Don’t Leave Me now so beautifully continued the eerie feel of desperation.

Then video projection HEAVEN during Brick pt 3 and the Last Few Bricks – probably my favorite part of the show(excluding the emotional faves like CN and ITF), which I also kind of expected it to be coming in. Goodbye Cruel World was great, and I was relieved to be able to see Roger during this bit.

Probaly about time I explain that me and my crew flew in to Oslo on about two hours of sleep at 7am the morning of the show, and then failed miserably at getting any more sleep during a few hours at the hotel before hitting the city. So by the time the show started at 7:45 pm, we were a bunch of zombies, and I think I burst all my remaining energy before In The Flesh even started. Add an increasinly warm arena with increasingly bad air, and we were all done at the end of part one, which felt like a full show and then some.

Intermission saw some panels in the roof open up to supply some delicious fresh tempered air, which helped.

Hey You behind the wall where you can see the spotlights changing and not much more never seizes to capture my full attention and imagination. Not sure I think the graphic of Pink here really adds anything. Is There Anybody Out There is such a beautiful little thing. Couldn’t see the hole where the music came from, so I just closed my eyes and enjoyed it.

Then the Hotel Room opened up right smack in front of us. No Tropicana-sign, but I didn’t mind. Really well done this. Vera and Bring The Boys are both massive, but shouting along to the latter is just completely out of character for Norwegians, even though we very much can relate to sending our countrymen off to war of late. Videos during Vera along with that arrangement easily the most emotional part of the show though.

Comfortably Numb then. Nice that Kilminster’s solo had grown a bit since the early parts of the NA tour. As mentioned, there wasn’t much of a sing-along here. I was soooo happy that we got to see the boys on the wall nice and clear, as I had feared we would be too close to the stage to see them. Great shadows on the back wall of the arena. By this point this show had just hit a peak it would never descend from. Great to see Wyckoff all relaxed up there and waving to the crowd. Screw the lazer lights epileptic end of the show live concert version of this song – THIS was Comfortably Numb like I’ll never experience it again. 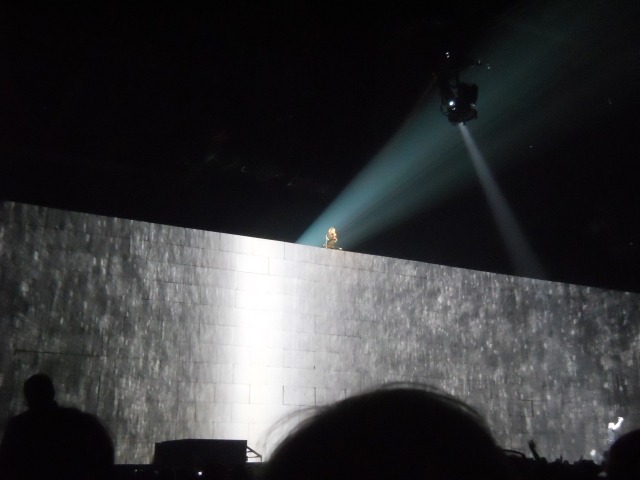 Part 2 also left me totally in love with the Lennons. Great work on The Show Must Go On, and of course in starring as the local sirens on RLH. Also, Roger in great form during In The Flesh, and the machine gun bit is a tremendous addition. As as been noted, Run Like Hell is the one that finally got everyone on their feet clapping along, just like when I saw Aussie Floyd in Bergen last month. Oh and the pig. Great and all, but the highlight is seeing it’s shadow pojected on the wall. It flew really low over our heads on it’s way back to the wall, with the propels supplying a nice air conditioning effect.

The Trial is the trial, wall came down beautifully, and Outside The Wall is just the most beautiful ending to a show I’ve ever seen. Waving ballon girl with the red background – I could watch that image for days on end and never stop smiling. Nice little speech from Roger after the show, another thing I didn’t see on the brilliant HRV-release. 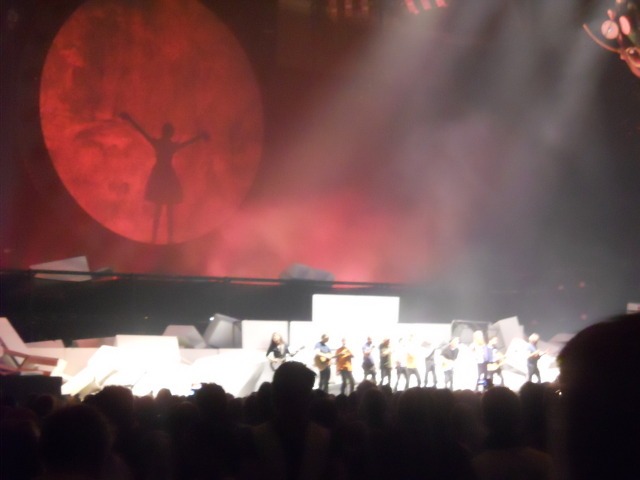 Certainly quite a few positive additions and an extra load of confidence since the NA shows. Make sure to get the DVD/BR if you’ve only seen the NA-versions! Easily the greatest show of any kind I have ever seen, and I would love to see it again, but wallet says nooo. Still, so glad to have experienced this from a great vantage point and with great friends and family. Production was damn near perfect – the image projections were a bit off througout the show, but that didn’t really mean much. Plenty of lip syncing/singback from RW, but anything else would be insane at his age anyway. LOVED the quad sound effects, and, well, THIS SHOW DOES NOT NEED DAVID GILMOUR.

Review and above pictures with thanks to JThue

Roger Waters - The Wall, 30th April 2011 - Oslo
Some videos from this concert have been removed as Pink Floyd claim copyright on them