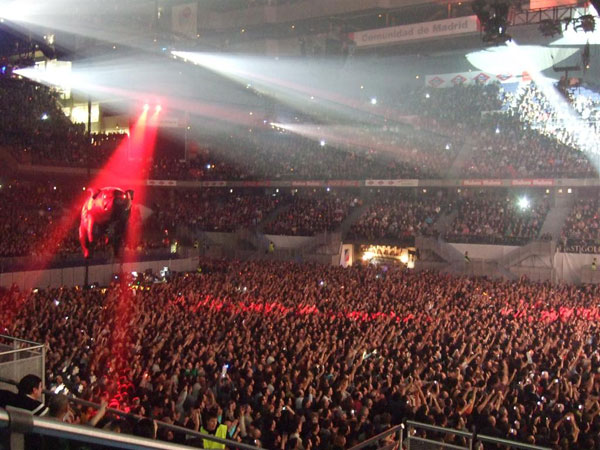 Roger came on stage as happy as I’ve ever seen him, running up and down the full length from left to right holding his arms out and taking in the admiration.

Two guards had, by then, made their way onto the stage. One placed the leather trench coat on Roger while the other helped him with the sunglasses from the onstage mannequin. He belted the coat up, pulling the belt tight around his torso and walked over to the mic.

During his speech before Mother, Roger said he performed The Wall thirty-one years ago in 1979 in L.A. Then he said they returned to play Earls Court in 1980. They DIDN’T!! They played L.A. in 1980! Something new I saw tonight was when the words “No Fucking Way” appear on the right side of the wall, the same phrase was written out on the left side, but in Spanish!! I wonder if this will continue in each country according to the language; I bet it does. While playing Mother, it was obvious to anyone watching the show that something was bothering Roger. He kept looking over to his right in disgust, then pointed to something off stage. It took a minute or so for the roadies to realise that there was a fire door open at the side of the hall, and the light it emitted onstage really bothered him. After some scuffling from the crew, the door was partially closed and the light turned off. Apart from that, the first half went off without a hitch.

The wall fall was great tonight, however, at the last three shows, the majority of bricks fell backwards onto the stage. Due to the size of the venues in Europe, there doesn’t seem to be any clamps on the top of the wall on the sides. In the USA, this stopped certain parts of it falling down. Now, all the sides seem to fall, giving it a lot more impact. After the wall fell it took ages for the band to come back on to do Outside The Wall. I could see Jon, Graham, Harry, and G.E. at my side of the stage waiting for Roger to go onstage–there was at least a five minute wait! Jon and Harry were looking at each other and talking to the crew. I think a few of them thought something was amiss, as did I. To the crowd, who knew no different, it was just an excuse to start the famous Spanish Ole, Ole, Ole chant, which sounded fantastic. I know Roger is aware they do this, and I have to wonder if his delay in coming back onstage was, in fact, to encourage the crowd to do this!

Above review, pictures thanks to Simon Wimpenny

Thanks to Salvador Colomina