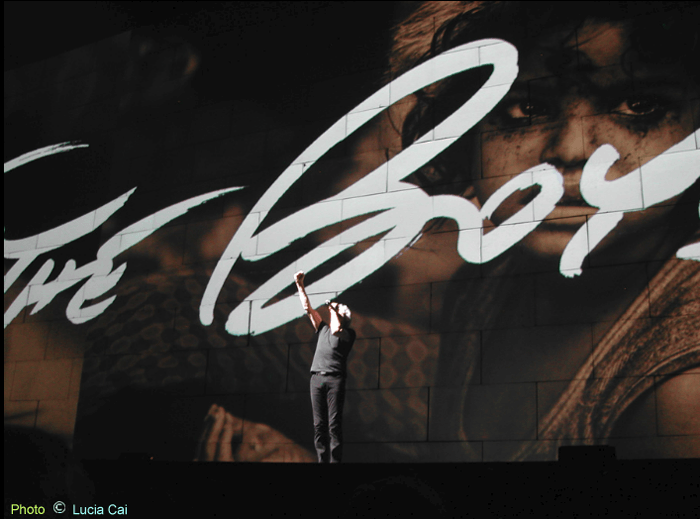 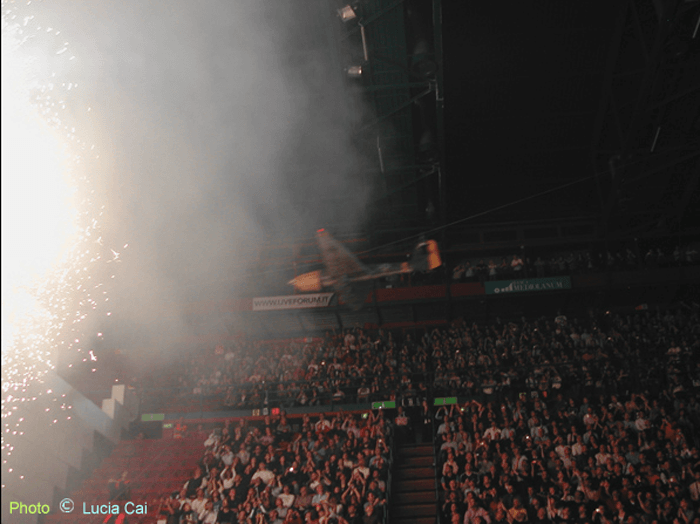 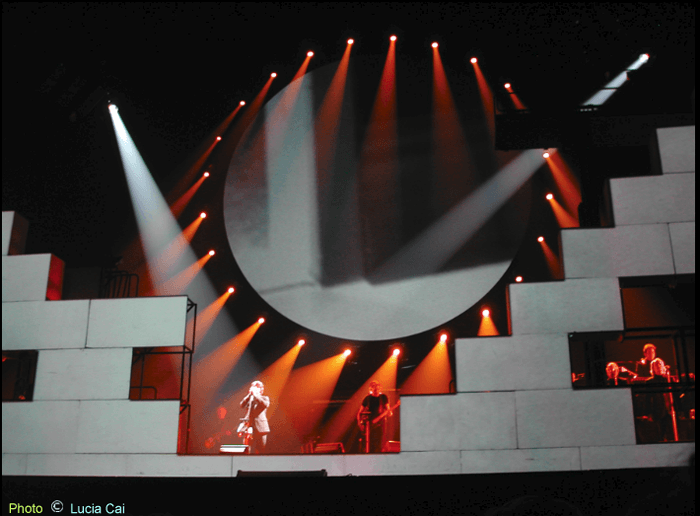 All above images are copyright Lucia Cai  SEE LOTS MORE 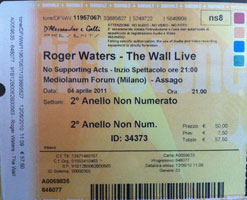 Thanks to Luigi Baratto

So we all got to the venue around 7:30, picked up any tickets that people were waiting for and made our way in to the venue. From the moment we hit the floor you could tell it was a totally different atmosphere to the night before.

Kami and I went to have a chat with Dave K before the start of the show, his amps are made by an Italian company, Brunetti, and he had representatives from the company as guests there tonight to see the show and although he didn’t say it I could tell he was a little nervous. We joked about turning them up a couple of notches just so they could hear them and to make sure he got the sound right on the intro to Run Like hell. We headed back to the floor and met up with Kevin, Joe, Kim, George, Nigel, Jens and a few others. We were all stood on the left side of the stage about 4 or 5 rows from the front. Mark and Beth were in seats tonight just up to the left of us and were clearly visible in their bright yellow WTF Jimmy Buffet shirts!

The crowd were already starting to get excited and there was still half an hour to go till ShowTime. Beth and Mark were able to take some great pictures and videos of the show from where they were sat but also of us all on the floor as we were waiting for the gig to start.

The crowd went wild as the opening notes to in The Flesh were heard, humming along to the melody so loud it sounded like swarming bees in the hall! I looked at Kim and Joe who were stood right next to us and you could tell they were astonished at the atmosphere. Unfortunately it soon became apparent that we had a crazed fan next to us who thought nothing of shouting and screaming “Roger we can’t hear you” when he wasn’t even singing! He then started jumping up and down right next to us without a care in the world of who he was affecting and at one point his elbow catching Kami right in the side of the face. One person you don’t mess with is Kami and she turned to him and landed him a punch right in the gut! He was slightly taken aback by this and although he carried on doing what he had been it wasn’t long before he burned out and disappeared off to the sides as all the energy from his body disappeared and he was unable to keep it up, he probably went for another beer! But wherever he went he never came back and wasn’t missed.

The crowd started to sing during Another Bring like only the Italians can, perfectly in tune and perfectly in synch to Roger. You could see by the facial expressions from the band that they were loving it tonight, Dave kept looking at Snowy as if to say “is this really the same audience?” Snowy smiled and nodded and just lowered his head and carried on playing. The fans watched Roger’s every move onstage, wherever he walked there was a sea of hands and cheers, stage left, stage right, the middle – he couldn’t go anywhere and escape the fists and shouts directed towards him. I kept looking up at Mark and Beth and their whole section was stood up at times cheering and chanting, I knew they would both be enjoying the show a lot more than the previous night and was happy that the Italians fans had proved me right in telling the girls and Mark that there really is no audience in the world like the Italians.

At intermission Kim and Joe went to get a drink, Kevin and everyone else stayed put but Kami and I saw our chance to get closer to the stage and slowly started edging our way further to the front and to the middle. It’s a lot different in Europe at a standing audience show, if you want to move forward you do just that, no one stops you and everyone moves to the side to let you through and gives you space wherever you decide to stand. We got talking to a group of four Italian fans in front of us who started asking where we were from how many shows we had seen etc. etc..

Intermission was over in what seemed like a couple of minutes and again the crowd stated singing as soon as Roger started with the “Hey you” lyrics. The good thing about the standing shows and the fact the venues in Europe appear to be a bit wider than the USA is that the hotel room scene whilst to the left of the stage is over the floor area instead of over the first band of seats on the left. This means your sooo much closer to Roger during this part of the show. As the hotel room lit up it was as though every camera on the floor was pointed towards Roger and snapping pictures due to him being so close to the audience. I’ve never heard a crowd sing the words to Vera like they did tonight, it made the hairs on the back of your neck stand on end and I just kept thinking what it was going to be like when Roger takes his fist and “opens” the wall to the first note of Comfy Numb. Seconds later I found out, it was amazing, the crowd went absolutely wild and started singing the opening lines along with Roger.

Dave did not disappoint the crowd with both solos and I’m pretty sure the buys from Brunetti must have been impressed by not only Dave’s playing but how his guitar sounded, how could they not be? The guitar squeals, the bends, the hair flicks, it was all there tonight and even Roger looked a bit taken aback onstage as to just how good it sounded. It’s always better when the band play in the same venue 2, 3 or even 4 nights in a row as Trip, the front of house sound guy can tweak the sound that bit better when the venue is full of people, it’s always a lot harder to get the sound right at a sound check when the venue is empty! But when your able to get it right night after night when it’s full of people the 3rd and 4th shows always sound incredible and tonight was no exception.

Run like hell had all the audience clapping in unison, Roger not even trying or needing to tell everyone to clap louder or enjoy ourselves, I don’t think it was possible to do it anymore that they were doing! The pig made its 2nd appearance in as many shows and to be honest its very rare that I even look at it now, it’s so much better watching Roger getting into his act onstage. he pulled his imaginary gun from under his coat once again to shoot at the audience member that he had picked out tonight and then took his machine gun to shoot at everyone else commenting that that there would be “no exceptions” to who he would shoot!

The “animated” part of the show went so quickly tonight and before I knew it I was screaming at the top of my voice “Tear down the fucking wall”. Little did I know this would turn out to be literally what the crowd would do!!

The wall started wavering on the top left side before Roger stepped offstage, it sounded like every voice in the venue was shouting “tear down the wall, tear down the wall”. The first two rows of the wall fell forward onto the stage, the next few rows teetered backwards and forwards looking like they had a mind of their own but couldn’t decide which way to fall. “Forward”, I kept willing to myself and just as I did the whole next 10 rows started to fall forward into the crowd. It was incredible, I don’t think I’ve seen any other “wall fall” where ALL the bricks fell forward onto the stage and crowd. I’d guess maybe 6 or 7 bricks landed in the first few rows of the standing crowd and as security leapt up to try and recover a few of said bricks (which incidentally cost $200 each) the crowd could see what was happening and the remaining 2 or 3 bricks started to get passed further away from the front as the audience “crowd surfed” the bricks well out of reach of security. It was then that I could see little bits getting torn off the corners, then the sides and everyone wanted a piece of the brick. This all happened in the space of a couple of minutes and as Roger walked back onstage he could obviously see the couple of bricks getting ripped to bits and pointed and laughed out loud. I looked back over to one of the bricks and in the space of seconds it was destroyed, everyone that managed to get a piece started waving it in the air towards Roger and the band, it was incredible and a sight like I’ve never seen before. Dave, Snowy and everyone else were just in fits of laughter as they saw what was happening.

G E Started the opening notes to Outside The Wall and the band continued as the crowd cheered and waved their bits of white cardboard. As Roger said his little speech to the crowd they started the Ole Ole Ole chanting, just as they started to stop Roger looked at Robbie, said a few words and Robbie took his microphone and said Ole, Ole, Ole. This not only had the crowd shouting and screaming but also started the loudest ole, ole Ole chanting I’ve ever heard, so much to the delight of the band that they all started to jam and play their instruments along to the chanting!! This went on for at least a couple of minutes before the band finishing their unrehearsed and unexpected extra track and Roger continued to introduce the band, Dave K’s reception was great and again made the hairs on the back of my neck stand on end, I can only imagine what Dave must feel like onstage when he hears this, it must be an incredible feeling.

And then it was over, the band left the stage, the crowd made their way to the entrances and every odd person we saw walking on the floor there was one with a piece of white cardboard in their hands…

With thanks to Simon Wimpenny