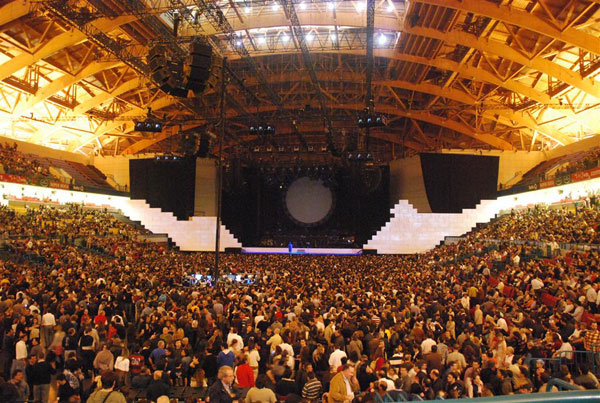 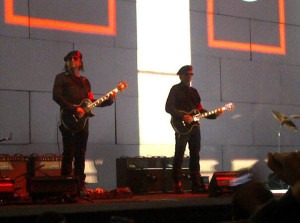 So the band have new uniforms for the second half of the show! All the band are wearing all black with dark sunglasses and black French style beret’s!!

Have to say that it looks great now the two guys have both got black Les Pauls! Dave’s other new guitar is a Rasmus, he played both new ones a few times during the second half, have to say i didn’t think Dave’s Rasmus sounded as good as his telecasters at the beginning of Run Like Hell, just didn’t sound as loud and as raw! maybe it’ll get better. 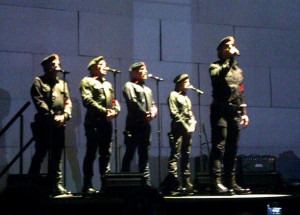 The hotel room that pops out of the wall has changed quite a bit, its now all white with no Tropicana sign, there’s a cityscape lit up on the back of the wall and there’s a new “euro” style bed in place of the old looking one. From memory the chairs different too but could be mistaken. Roger also has a telephone prop now that he uses during the line “when I try to get through, On the telephone to you, there’ll be nobody home”

During the swirly graphics for Comfy Numb Roger now stands on the podium on the left and “freezes” for at least a minute while Dave K is playing his solo. He also now doesn’t thump the wall with his fists to crack all the bricks up but head butted it tonight!! 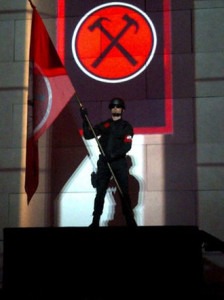 There’s a few new graphics during Run Like Hell and a few things written on the wall, i didn’t take my regular camera tonight just my blackberry as i wanted to enjoy the show, and I did. Will take a few pics at the gig tomorrow of the new graphics.

Okay–so all the band are now dressed in black suits, black shirts, and ties. While they all look smart on stage, it also looks really uncomfortable to wear! There are a couple of minor changes in the first half projections but nothing huge. All the flag bearers have hard black helmets. Two of them come out to the front of the stage to throw pink on stage and then get on stage to hand Roger his coat and sunglasses. Band is very tight for the first night, but the star of the show so far is Robbie; his voice is fantastic!! He must have done some vocal practice or exercises. It sounds awesome! 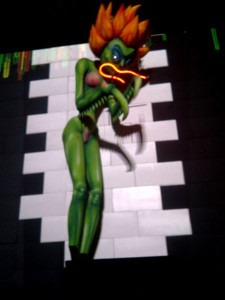 Review & above pics thanks to Simon Wimpenny 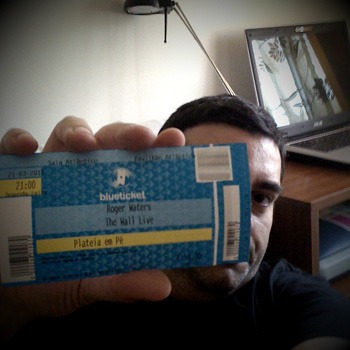 José Mendes holds up his ticket for this show