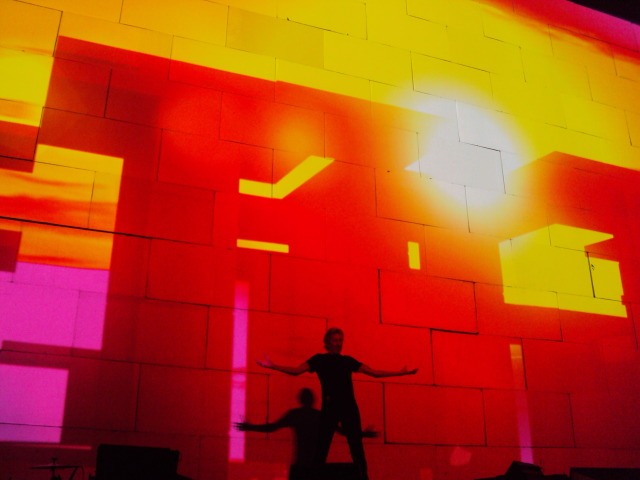 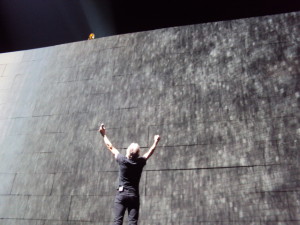 Our run of shows at the O2 began on the opening night, when tons of us descended on the beautiful Victorian pub The Pilot Inn, to share the experience of seeing Roger Waters perform. Last time Roger played the O2, in 08, we discovered that the bars inside the O2 complex get rammed and it’s impossible to mingle, so we opted for this one, with its fine selection of ales and cosy beer garden. Also, you have a ten minute walk across a park to get back to the arena, which is the ideal place for a nice little pre-show smoke.

Some purists might prefer Earls Court as a large London arena, as it was the location of Pink Floyd’s original run of Wall shows in the early 80s, but the O2 really does seem to have better amenities and transport links. It also affords better views, even to those folks sitting way back, despite holding an extra 4 thousand people, at a 23 thousand capacity. This is due to the seating tiers being higher, but the distance from the stage to the back of the arena being less.

We were lucky enough to have tickets in varying spots in the O2, so we could appreciate the various props from different perspectives. This brought home how cleverly designed the production is that every single seat in the venue affords a view that is equally as enjoyable to the spectator. Interestingly, the sound seemed better way up at the top in the nosebleed seats – not that we could fault the sound in any respect. The atmosphere was awesome everywhere too – sitting nearer the back didn’t mean disinterested casual observers – everyone there was blown away and completely intoxicated by the visual feast that Roger had laid on. Sitting in the front row gives the spectator the opportunity to witness interactions between Roger and his band, and the puppets look awesome up close, but the screen films and some of the props, such as the pig, are not so visible from this perspective. Also, it is nigh on impossible to see Kilminster on top of the wall from the front row! 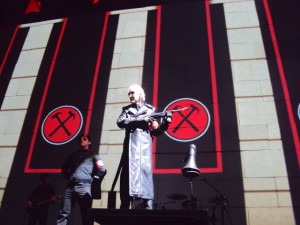 As a Londoner, I have to say that it is a joy to be able to see Roger at the O2, as for so long the Millennium Dome had seemed like a White Elephant that we had to see all the time, whereas nowadays the sight of it brings only positive connotations and stupendous memories.

We’d already caught one of the shows at Madison Square Garden, so we had a pretty good idea what to expect. I can’t say I noticed a great deal of difference in the projections (though my memory of the NYC show is a little hazy), but the costumes have definitely improved – I totally dig the new fascist uniforms with berets, in fact I wish they would sell replica berets in the merchandise stalls! Roger toting a machine gun is also a delightful new extra. We were sad that crew driver Brent, who played the trolley pushing homeless guy in the US, isn’t part of the show any more, but I guess he was irreplaceable!

I don’t recall the warning about flash photography from the US show, but it made total sense, and it was nice to see it so well observed by the respectful crowd. 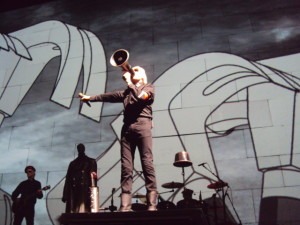 The benefit of seeing the show multiple times was that as the various tricks make their appearance, you know which direction to look in. I’d completely missed the Spitfire at Madison Square Garden, so enraptured was I by the pyrotechnics display during In the Flesh, so it was nice to know when to expect it!

Roger himself seems to have improved as the tour has worn on. His performance has become increasingly theatrical, in a good way, and his trumpet playing seems to be getting better too! It’s amazing, in light of his understated stage presence during Pink Floyd’s heyday, that he has become such a consummate showman. He says very little, bar introducing the vintage screen footage for Mother, and leading the applause for his band at the end of the show, but his words are spoken with genuine warmth and humility, and it’s a delight to see a musician who is clearly getting so much out of performing for his fans. It always amuses me at his shows when someone down the front shouts “I love you!” and he replies “I love you too!”

Something else that seeing multiple shows reveals is an intriguing insight into the mechanics of staging The Wall. The stage hands assembling the wall itself are barely noticeable, and it’s astonishing how, as each brick is placed, it is illuminated incorporated into the wider projection. As has been noted, the wall falls differently each night, and on the first night in London it seemed to get a little stuck on the way down! 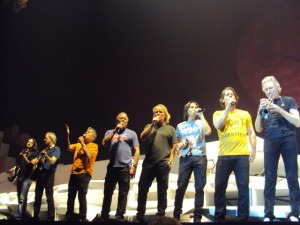 I’m pleased to say the London kids performing during Another Brick in the Wall Part 2 were really going for it, and a few of them did some respectable freestyling. I feel so happy for those little kids that they’ve had the opportunity to take part in this extravaganza, and will cherish those memories for the rest of their lives. And hey, it can’t hurt to convert a new generation of Pink Floyd fans!

Now on to the juicy stuff…

We had a pretty good idea which night a certain Mr. David Gilmour was going to show up on, and on the second night we lucked out! You cannot imagine the frenzy of applause that ignited the second that Gilmour appeared on stage and started playing THAT guitar and singing in THAT voice! I’ve never seen an audience reaction like it. Roger didn’t even have to introduce Dave – everyone just KNEW. The atmosphere was pure rapture.

Then, when we thought the night couldn’t possibly have been more perfect, mandolin toting Dave joined Roger and the rest of the band onstage for Outside the Wall, and up popped Nick Mason from the audience to join them, on tambourine! After the song was over and the rest of Roger’s excellent band had departed the stage, Roger, Dave and Nick were left there, and Roger made a touching speech about how the others used to put up with his angst, but that now he is a better person who derives immense pleasure from performing live and appreciates his legion of followers.

We saw the remaining members of Pink Floyd come together on stage looking delighted to be there, despite all the history of antagonism that we are so familiar with, and so the message of The Wall was amplified ten-fold – love and camaraderie usurps bitterness and anger. Amen Roger, Amen.

Now let’s all pray for The Final Cut tour…

Above review and images with thanks to AphroditeMF (Natalie Thake)

(Above) Some of the AFG family before the show. Joaquim Arnês from Brazil (who sent in these photos) also flew the AFG banner at some of Roger’s USA shows. 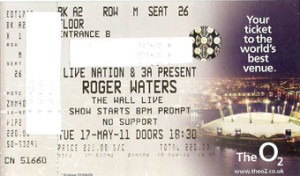 Thanks to Joaquim Arnes