Tonight’s show was standing only on the floor and as much as i do like the standing shows i was ready for a sit down tonight, i also decided id see the show from right at the back on the second level, just to see it from a position id never seen it before. Id seen outside there was a VIP entrance and below is a picture of said VIP all of whom must have places in private boxes at the arena and go in early for dinner before the show.

I was sat next to three guys whom hadn’t seen the show and knew little about Floyd or Roger apart from having heard The Wall a few times,one of their friends had chosen to go see Bryan Adams tonight whom i believe was in Copenhagen, bad move i told them, they agreed.

During the Spartacus routine one thing that did look great was the spotlights moving around the audience on the floor,every time “I’m Spartacus” was said the spotlights would move to someone else, then someone else and so on and so forth The first thing i noticed while at my seat was how small everything looked! even the wall itself looked small and when the pyros went off and the flag bearers platforms started to rise this was even more evident, one thing i did notice immediately was how much the light from the projectors gets in the way of seeing the show from this position! As I’d seen all the other shows from the floor and usually from no further back that 20th row i had always been in front of the projectors, i had no idea how much light they put out ad especially after all the pyro smoke from In The Flesh.

The sound wasn’t the best tonight either, you just don’t get any stereo separation when your watching it from the rear, it sounds very bassy too and one thing you certainly don’t hear which i love hearing is the monitors onstage. At the beginning of Another Brick i was looking for the teacher coming down and at first i thought it had got stuck and hadn’t come down but when the lighting shone on the area there it was, i was totally surprised and the appearance of the teacher is certainly one thing that works a lot better seeing it from this far back. The kids weren’t great again tonight and just stood there clapping but that was all, not one of them moved forward or broke out and started dancing or playing air guitar, i wonder if this is just the kids that they are getting while around here or if they have started to tone it down a bit, i hope its not the latter!

The crowd went crazy tonight for some reason when the McDonalds signs came down on the wall,incidentally the colour on these and the images have been brightened a lot since they were added, they are really clearly visible on the wall now unlike they were earlier in the shows when they were not just red but red with white on them.

There were two bricks missing all the time for Don’t Leave Me Now and at first i thought there had been a problem and two bricks had been forgotten, however, at the end of the track i realised why. The ceiling in the venue was a lot lower tonight and the two “helicopter” spotlights that move forward and backward of the stage were not able to move out unless a couple of bricks from the top row were removed!

As much as i enjoyed seeing the show from this position it was just so flat! there was no atmosphere, nothing was right there in front of you and in your face, everything looked so far away and sounded the same. I certainly would not have been able to do as many shows as i have if i was sat here every night! i decided there was no way i could sit here for the second half and moved down to the 2nd block at the side of the stage on the first level, one of my favourite places to see the second half from.

I had seen Kevin just at the start of the show from where i was sitting, he was in our regular place on the floor right at the front left of the stage. We have both got to know a couple of the crew while seeing the shows one of them being the guy on the “helicopter” spotlight, he said to Kevin last night that in Hamburg when he came out during the beginning of Another Brick, he had spotted Kevin in the sat in audience and made sure his light was on him when roger says “ and there’s one in the spotlight he don’t look right to me”! 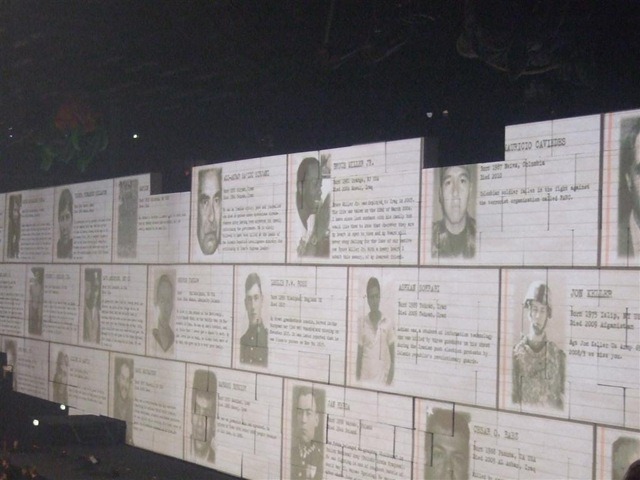 During intermission the teacher was lowered, bundled up and then raised again, i can only think this was due to the low ceiling and it getting in the way of when Dave K is on top of the wall during comfy Numb. 4 bricks were removed too so as to get the spotlight guys on the outside of the wall for their duties during the second half of the show. The spotlights moved forward and the bricks were replaced.

There were a couple of problems during ITAOT and Nobody Home, i think Dave was tuning up and strumming at the beginning of ITAOT but didn’t realise the guitar was live and the band thought he had started playing so started to join in, this through the timing out totally as some joined in and others didn’t but joined in at the right time, I’m sure Dave will comment and let me know what actually happened.

There problem was also similar at the beginning of Nobody Home when at one point the band stopped paying totally and roger was singing the lyrics alone without accompaniment.

Run Like hell really got everyone going tonight and i don’t think I’ve seen as many people standing and clapping at the shows so far, it looked great 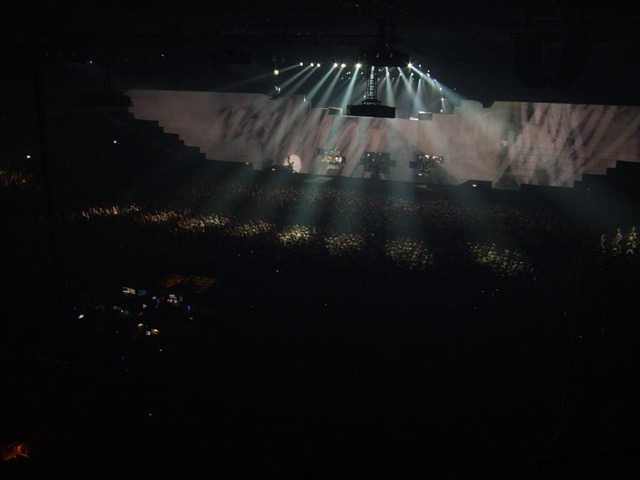 The animation from The Trial always looks great from close up and especially from the side in the first 2 blocks, its never been one of my favourite tracks on the album but it for sure has grown on me and seeing Roger do it “live” and seeing the images the size of semi detached houses makes it a lot more special.

The wall came down forwards then backwards then forwards and the crowd rose to their feet cheering. Outside the wall was the usual with Roger saying how much he had enjoyed the show and how appreciative he and the band were.

Thanks to Lars Normann