We headed out to the venue around 5:30 and got there around 6. Had a 5th row ticket for tonight but went to watch the first half of the show from an empty seat on the right side of the stage just for a change.Sound wasn’t great there but i love the view when your in that block right next to the wall, especially when Roger comes right over to the side of the stage.

Not sure what they’ve done to the sound but when the subway train comes along and you hear the gunshots at the end the sound is now only heard through the rear quad speakers and it sounds very odd, its real quiet and doesn’t sound anywhere near as good as it used to be! its been like this for the last two shows so we’ll see if it was a glitch or not after tomorrows show. 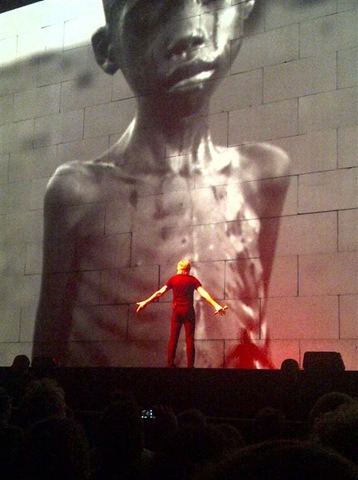 I’d spoke with Dave K before the show about the vocals on Hey You from last night, he said it was definitely Robbie and he’d been listening to Gilmour earlier that day and was trying to perfect his singing! He’d dome a damn good job! Dave also mentioned that Rush were playing in Stockholm and a lot of the road crew were here to see the show tonight.

The crowd again were very reserved, Roger saying before mother “wow it’s so quiet in here you can hear a pin drop” and you could! it was deadly silent and even after his comment there was very little feedback from the crowd, Roger just grinned to himself and carried on with his intro to Mother. There was a good 10 seconds of feedback during the middle of Mother, didn’t cause any other problems, was just very audible to the audience. Forgot to mention last night that just before he started to play Mother when he was talking about that “fucked up young Roger” he played the first few notes to WYWH! beforestopping and going straight into the opening chords of Mother

Rogers still adding little nuances to his performance, and audible “sniff” has for the last few shows accompanied the line “a silver spoon on a chain” aduring Nobody Home as his mimics the snorting up of some substance. He also continues to move his middle finger in a sexual way during the line “ trying to pick her locks” tonight though picking someone out on the front row and bending down to do it at them!

Roger tried his best to get the crowd on their feet tonight but to no avail, he laughed to himself a few times as the odd person shouted out in between tracks. Even the line “can you stand up, stand up” and his hand gesturing for people to stand up didn’t work at all! His timing to the machine Gun fire was totally off tonight, he didn’t try to correct it either, I’m not sure if the click track was off or what but the first gunfire noises came and he then pointed the gun and “shot the audience” as there was silence, he then lowered his gun and the gun shot noise returned, first time I’ve seen him mess this up. He did however point his gun in the air and made a few extra shots and not only was there the sound of a bird squawking after it had been shot but a few feather dropped down from the roof adding to the effect!! I kid you not. Who said the wall on Broadway wouldn’t work as a comedy!! 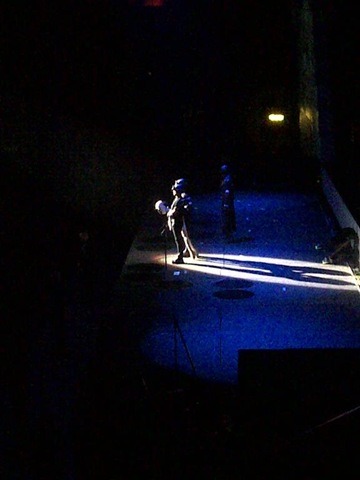 The crowd were so polite that at the end of Waiting for The Worms when Roger normally throws down his shirt and armband on to the stage he threw it all up in the air to then see it land in the arms of two people in the front row, what happened next ? Yup the people stood right up and handed it back to the security in front of them! imagine that happening in the US ? i think not.

The wall fall was the same as the night before, the first few rows falling forward straight away, then the remaining rows teetering backwards and forward before it all coming down forward onto the stage. Honestly, i think they’ve perfected the fall too well now, there’s no randomness to it, its all perfectly controlled, it all stays within the barriers and there’s very few bricks that have to be thrown backwards to the rear of the stage before the band come out. If your gonna tear down the wall, TEAR it down without the random precision!