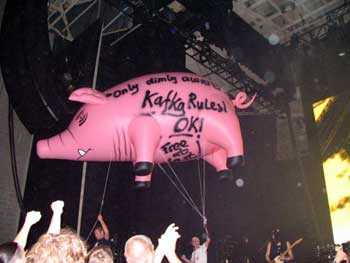 I was privileged to sit 3 rows back, dead center, so I had an amazing spot to take in the whole show.

Everything was great, especially Carol Kenyon’s vocals on The Great Gig In The Sky. She received the largest applause for any solo performance during the night.

I was also really impressed with Ian Ritchie’s contributions on saxophone.

If any black spots existed, they were of course Roger’s lip-synching on a few numbers, but even that didn’t really take anything away from what was an all-around top-notch evening.

I truly don’t know where to begin.

My First Roger show: A few years ago, The In The Flesh Tour, at tonight’s great venue, the Tweeter Center, south of Boston. This really is a fantastic place to see an outdoor concert. The crowd that night was absolutely into the music he played that wonderful evening. For me, after growing up listening to the music he created with the rest of the band, that first show was absolutely a religious experience. I would be blessed to see him two more times, and then, once again, tonight.

You know the set list. The fact is this: great music, amazing and entertaining video, and yes, off the charts pyrotechnics. Wow. He completely had the crowd mezmerized throughout. You could see him winning over a whole new audience as the night went on. Lots of young people there, more than I expected, and they were really into it.

Pyro; not sure what to give away, but there are exposions. All perfectly timed and fun. The video for the one song I simply could not wait for, Perfect Sense, was awesome. And the grand finale for the battle between the sub and the oil refinery is worth the price of admission alone.

And Vera and Bring the Boys Back Home? Thank you, Roger, for adding them this year, and giving us a chance to hear these great little song live. Jaw-dropping.

Leaving Beirut: I was a bit worried about this one, having read everything here. But…when his piercing lyrics were sung and popped up on the video screen: huge roar of approval, fist pumping, you name it. Probably just a little bit to do with the fact that this is a -slightly- Democratic state, but the crowd was really into it. Big roar of approval once it ended!

And by the way: after suffering through the 2006 summer of rain – a perfect night, gorgeous FULL MOON, receptive, rowdy but generally well-behaved audience. What a night.

And…..out comes the pig during Sheep. With ‘vote Democrat on Nov 2’ written on it’s side, as well as other little comments I simply forget right now. They bring it around the audience, right past my row, and then just let it fly out into the night sky. And away it goes, as Sheep rocks in the background, and the crowd is going absolutely berserk! I hope wherever it lands, it makes some news tomorrow.

The Dark Side of the Moon set was, simply, incredible. It’s funny, because the young kids around me were amazed during the first set, because they didn’t know he was going to play those great songs. They of course went really nuts once the opening heartbeats starting pumping.

I’m sure there were some errors musically, and from where I was, I simply didn’t bother trying to figure out when and where he was using some..assistance. The night was just too good to think about those things. This is a man who really knows how to please an audience, and they devoured all of it.

I could go on; but that’s enough for now. Enjoy Saturday night, folks, and the rest of the tour!!

Thanks to Ambassadors of Morning

I live five minutes from the Tweeter Center. A fantastic show. I saw Roger during his final US ITF show in Providence in 2000 and in Boston at the Timothy White Benefit show in October 2002. Tonight was amazing. Not as loud as I prefer for a show, but crystal clear nonetheless. Dave Kilminster impressed the hell out of me, he nailed Gilmours parts far superior to Doyle, blegh. Roger was in fine form, he definitley mimed have a cigar, sheep and fletcher but other than that his voice was right on. I just cant believe it. Sheep, Have a Cigar, and Set the controls were all out of this world. Leaving Beirut met with cheers of approval. I was really pleased with that. Roger even said before the song began to play, “Well, I hope you enjoy it…”

A great show. Roger was playing his best bass on Have a Cigar, he had several run down the fretboards that were awesome. Sheep was brilliant with the Pig being released into the air. Dark Side…far better than anticipated. On The Run was truly scary. Katie Kissoon was brilliant on Great Gig, Im pretty sure it was her. Southampton Dock and Bring the Boys Back Home were real emotional for me as I have a best friend who is now in Iraq serving for a year. I cheered my ass off for Leaving Beirut, Andy Fairweather low kicked ass at the end of it.

A beautiful evening with a full moon lurking overhead.

Thanks to Pigs Three Different Ones 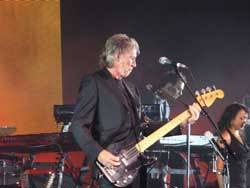 I believe that the previous reviews have articulated the feeling of the crowd at the Tweeter Center Friday night well, but felt compelled to share this amazing experience also.

Roger’s creative genius and showmanship has exceeded all expectations, which were tremendously high (as I have been a fan for years and had missed the previous tour while out of the country in ’99, much to my dismay). I witnessed the Pink Floyd “brand” in the 1994 Yankee Stadium shows with Gilmour at the helm, but whereas the shows were entertaining and full of glitz and glam (utilizing Roger’s lyrics), there was never a doubt that it lacked Roger’s soul and imagination. I can’t fathom that any true fan in the ’94 audience didn’t squint for just a moment (or for the whole show like I did) to picture Roger alongside his estranged cohorts, hoping that he’d suddenly materialize and add depth to the surrogate band provided. I doubt any Live-8 style reunions will occur again based on Gilmour’s recent comments, but I don’t believe anyone saw the last gathering coming either, so here’s to hoping! 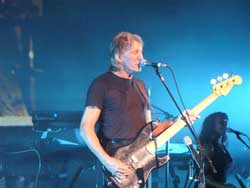 I have not one complaint about the show as I was in awe the entire time, but in retrospect it would have been neat to hear something from Pros and Cons or KAOS.

Roger was animated and often acknowledging us in the first few rows, much to my delight. It was neat that after all of the years of watching him, he finally saw me and returned the favor with a big grin…probably because I was singing my head off and freaking out in general ~

I had the joy of being within 5 rows of the stage (on the aisle, which is far closer than being in the center based on the floorplan) as the following pics display. 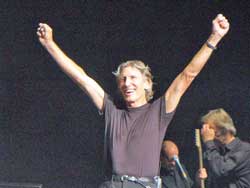 Also, if you are within a stone’s throw of the stage, please give a shout of acknowlegement to Harry Waters, who is an excellent musician in his own right and creating his own footsteps independently of his amazing father. My longtime friend Curtis Bartels went to school with Harry and I had the pleasure of meeting him then, only I didn’t realize it until afterwards who it was. I had thrown Animals on the record player ironically, to his amusement before his departure! Our attempt to reconnect with Harry failed at the backstage door, but hopefully we’ll hear from him again someday (vs_ct@yahoo.com, Harry)!

What an incredible experience, well worth all the money you can afford if you are a loyal fan of Roger and his Floyd roots. You will truly not be disappointed (especially if you spring for the first few rows). Since I had to fly to Mass from Florida to see this show, I certainly hope Roger comes down South next time!!

My best to all fans who have been enlightened by this master of progressive rock and political commentary. And to Roger, I thank you for reminding me daily that intelligent and beautiful music can co-habitate on my stereo through any one of your flawless albums.

It has been an honor and a priviledge that you have read my review; I hope you enjoy the pictures, one of which may be the best I’ve ever taken with Roger triumphantly raising his fists at the end of the show.

Above images & review thanks to Mark Fallon 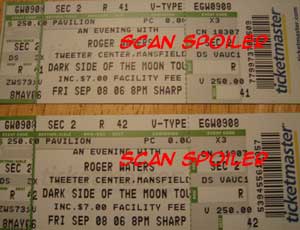 Thanks to Howard Marshall