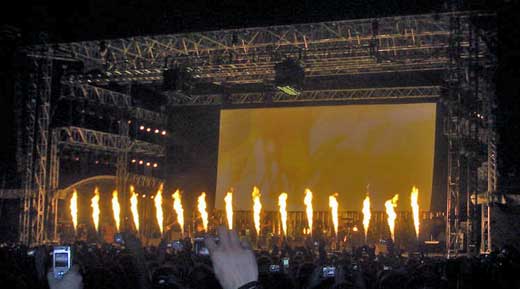 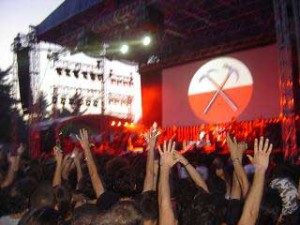 The show was as good as the other concerts Roger has had this year. The same playlist was followed also in that show which means that probably Roger will keep this playlist for now on.

Me and my friends arrived at Terravibe Theme Park at 17:00. The gates were already packed up with crowd (about 2000 people) and the roads near the Park were full of cars. The same amount of people arrived the next hours, so it is expected that 23-25.000 people attended the concert. They let us in at 17:45 and the most bizzare thing is that everyone was craving for beer and joints (where is the f*cking bar, dude!). Something like Woodstock-like feeling.

Roger started the concert between 21:00 and 21:30 with In The Flesh. Bombastic as always,that song, blew my mind away with the sound effects, the raw drums and the fire effects that Groupe F has brought to that show (similar to the Rammstein shows). Roger’s voice was very good and there was no sign of lip-sync in any of the songs. 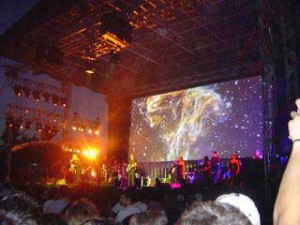 Then he carried on with Mother beautifully as always, Roger, sitting on a chair and playing the song very relaxed accompanied on the choruses by Carol Kenyon.

Then there was STCFTHOTS with a solo by Snowy White and sax fills. Different and better from the other live version of that song. Very good rearrangement indeed…

Then there were Shine On pts 2-5 with the first solo not being played at all. Roger had a very good voice this night and he showed it to us in that song, his voice was flawless. Absolutely aetherial!

Then there were Have A Cigar and WYWH with the first one being played exactly as is on the record (same solos etc) and Roger doing the part of R. Harper. WYWH was fantastic with the crowd clapping and singing along with Roger as usual. 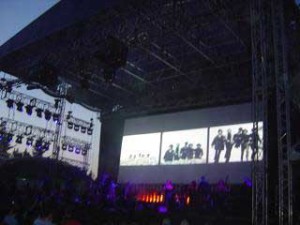 Then there were the two songs of off Final Cut. There was no sign of playbacking or lip-syncing or “faking” it whatsoever! His voice wasn’t at all raw which surprised me…Everyone in the band nailed these songs and left us speechless.

Then there was Perfect Sense 1,2 and Waters was full with emotion in that song, he was feeling every line of it and a wonderful PP Arnold blowing our (and Roger’s) minds away with her performance.

Then there was Leaving Beirut which surprised me because every one seemed to like it because it had “digs” in G. W. Bushs’ political actions. Roger told the crowd a little story: in 61′ when he was 17 y.o. he travelled to continental Greece and then to the Middle East where he hitchhiked afterwards in order to go home in England. He told us of some Lebanese family that helped him out when he had financial troubles in Beirut. The song is about that particular family. Again, he sang it full with emotion and passion.

Then there was Sheep which had no lip-sync-ing. At that song, Roger used the fire effects throwers which were throwing fire at the left and the right of the stage (like two collumns of fire) at the end of the song. Then there was a 20 minute break being followed by DSOTM. Then there were the usual encores.

I have to say that the films projections that Rog used through the night where all very fresh and hadnt anything to do with the old Mr Screen ones. They were all filmed again and directed with new scenarios with actors and places and special effects. Very surreal actually but also real-life!

All in all a great show, great ear piercing and buzzing quad sound system, amazing crowd and a beloved Waters enjoying himself speaking Greek to the fans all through the night. Thank you Mr Pink Floyd. You have earned our hearts…  Thanks to hydepark 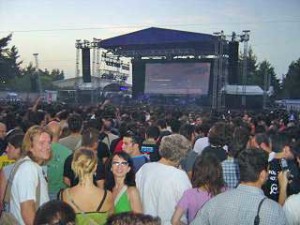 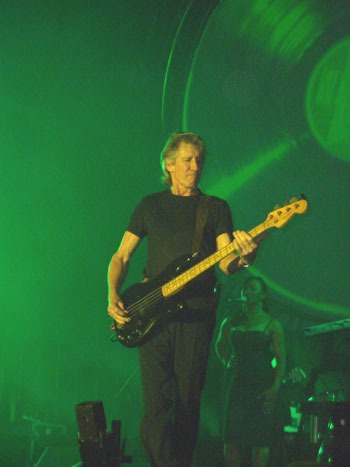 The set list as used by Roger – Thanks to Giannis Kantzios 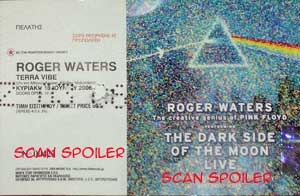