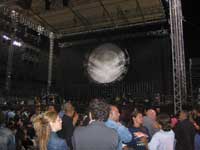 I flew in from Austin, Texas to see Roger’s performance in Rome’s Stadium Olympico.

The show was absolutely amazing. The first set comprised of Roger’s music from The Wall, The Final Cut, Amused to Death, Animals, and Wish You Were Here.

The audience was hanging on every note played and every word that was sung. Roger was clearly enjoying himself and his enthusiasm spread throughout the audience. In my opinion “Perfect Sense” stole the show in the first set. P.P. Arnold received a standing ovation for her part in the song (once again!). 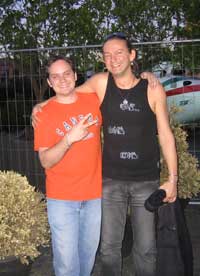 The audience sang so loud on “Wish you were here”, I could barely hear Roger’s voice (or maybe I was singing too loud)! Snowy White sounded absolutely fantastic with his signature gold top Les Paul guitar. What surprised me was the crowd singing along with Roger on “Southhampton Dock” and “Fletcher Memorial” per these songs are lesser known in the Pink Floyd catalog of music. Roger broke a string at the beginning Southhampton Dock and in between versus he stated “can someone get me another guitar?” he kept singing the song, while his guitar tech came out with another guitar. The crowd cheered wildly when Roger got his new guitar.

The second set comprised of Dark Side of the Moon in its entirety. What was absolutely mind blowing was how tight the band played the album. The quadraphonic sound system shook the stadium at multiple points during “On the Run”. Graham Broad’s drumming was brilliant on “Time” (of course!) A personal highlight for me was “Great Gig in the Sky” that was sung absolutely perfect. Another highlight from the Dark Side set was “Money”. Dave Kilminster did an excellent job with singing and the guitar work. 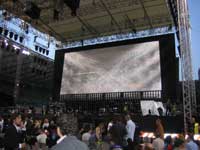 Speaking of Dave, I ran into him on the street by my hotel. He was kind of shocked that I recognized him. I took a quick picture with him then talked briefly about how I came all the way from Texas to see this show. He stated “you couldn’t wait till September?” I told that according to the schedule they are not playing Texas (I guess he forgot!) However, I would like to put a rumor to rest. I told him to pass a message on to Roger that he needs to come to Texas per there are a lot of fans that still talk about his shows from the 2000 In the Flesh tour. He advised me that the band will indeed tour on another leg in 2007 and should play Texas!

The encore of “Happiest days…”, “Another Brick in the Wall 2”, “Vera”, “Bring the boys back home”, and “Comfortably Numb” was breathtaking. After the standing ovation from Dark Side the crowd stood and cheered in celebration for this entire encore. (Mistake!)

During the second verse of Comfortable Numb, Roger’s mic had feedback problems which threw him off on a few words. It was kind of cool because the Italian audience was singing so loud that Roger looked up with a huge smile acknowledging that the audience had his back! Jon Carin (one of the most gifted musicians in the world) did a wonderful job singing the chorus to Comfortably Numb.

Roger looked and sounded very fantastic. He was clearly loving every second of the performance and the Italy crowd loved him just as much.

So was it worth flying all the way from Texas to see this show? YES!!! 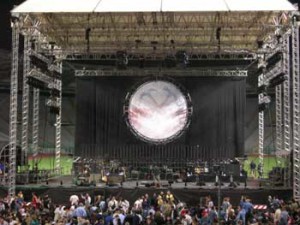 I am 45 years old and from Germany. I am admirer (and collector) of Roger Waters words and music for about 30 years.

I saw 22 shows LIVE from Roger.

This year I was in Berlin, Holland and Roma, I will go to London and Locarno.

I am just at home from Roma, I got a very good seat in the middle, some meters from the stage. The Roma show was fantastic the sound was very clear and very loud (may by with a little bit stadium sound). Roger`s voice (many spoken words in Italy and English) comes very clear between the songs. 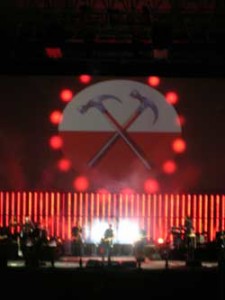 Roger got problems with his guitar on Southampton Dock, he claim for another guitar, pick up a new guitar, in the meanwhile he is singing without the guitar and stopping of singing, speak with the grouds and starts singing again, here was no Lip Synching !

I thing, he intent in Roma some (many) mistakes in singing, to show the people he is singing real.

I like the Final Cut parts very much !!! Special in Roma too: Have A Cigar, Leaving Beirut, Sheep, Us and Them and Great Gig.

After the encore the band is running fast from the stage, I thing there was a time problem.

Review thanks to dobby

Roger seen posing with a couple of fans in an Irish bar in Rome the night before his concert.
Thanks to Justin Von Kennel

Thanks to Antonio D.P

Thanks to Stefano Tarquini. 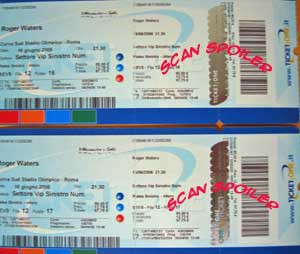 Roger was originally booked to play this venue on his 2002 tour. For some reason there was a last minute change, and Roger played the Flamino Stadium instead.