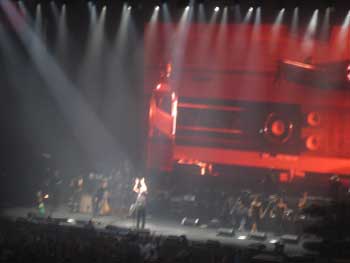 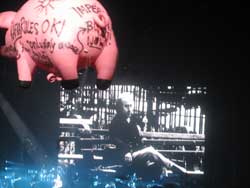 Heading back home to Seattle, I was in line to get on the plane. It was a slow moving line, and the flight stewardess was staring at the prism on the shirt I was wearing. She asked, “Is that Pink Floyd?” I said yes, and she responded, “Oh, my son loves Pink Floyd!” I told her that I got the shirt at the Roger Waters concert in Hollywood Bowl. I told her that I’d be seeing his concert in Seattle, too. She said, “You must be a big fan.”

It was uncharacteristically warm October day in Seattle which gave way to a typical chilly night. What a way to spend the night! What an experience! How do you top a Roger Waters concert? Well, with another Roger Waters concert! I was privileged to see Roger in two different venues. One, in an open-air venue, Hollywood Bowl. And the other, an indoor venue, at Seattle’s Key Arena. Gone are the huge flamethrowers that shoot flames four to five story high. Gone are the rooftop fireworks. Gone is the giant prism over the stage. What the Key Arena offered was the incredible surround sound especially during the DSOTM segment. You can feel the sound, and hear it travel! Roger could have just turned off all the lights and just played, and it would still have been perfect. He could have done without all the visual stimuli, and one would still experience a moving and memorable evening with his words and music. Nick was not there but the drum solo for Time was amazing. It was like one giant sound demo room for Bose speakers. 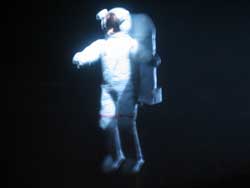 I was able to get four more tickets from a co-worker who was unable to go. I brought my daughter, two cousins and brother-in-law. They didn’t know what was in store for them prior to the show but they were certainly very impressed after. I commented, that’s just Roger, showing how it’s done. Roger obviously enjoyed the Seattle crowd. He even signed a couple of autographs before he left the stage after the DSOTM segment.

This show could possibly be the last of the tour; hopefully it won’t, but what a memory to cherish. But of course, it is certainly an individual experience as njk (Hollywood Bowl, 6th) mentioned in his review.

I did not mention in my review (Hollywood Bowl, 5th) that Neil Young’s songs were being played prior to the start of the shows. Wearing a Neil Young hat from the CSNY Freedom of Speech tour, I was hoping that songs from Neil’s new album would be played. 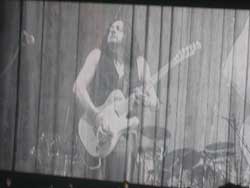 I don’t understand how one would come to a Roger Water’s show and be dismayed with his political and anti-war views. He has been writing and singing about them all along. This is probably not the appropriate forum for this but here it is anyway. I agree with the views of Mr. Waters and Mr. Young. I am grateful that these “outsiders” are here in America, and are raising awareness since U. S. policies have global effect, and creating a big mess. I believe that Bush should be sitting next to Sadam, and is tried for war crimes himself.

Unlike, California Governor Arnold Schwarznegger, who made adjustments with his policies in response to his constituents, and is slowly gaining back their approval; Bush is stubborn, whose credibility is shut, and whose mentation is in question. Unlike, the British politicians, who forced Blair to resign; the do-nothing U.S. Congress is in perpetual gridlock and power grab. It’ll be great if Roger and Neil can be on the Keith Olbermann show.

By the way, Nelson is my first name. It is somewhat misleading because I’m a first-generation Filipino-American. I retired from the U.S. Navy after serving honorably for 20 years, and currently; I’m serving my community as a registered nurse. I believe that I earned my soapbox.

Thanks Roger! Thanks Col!

Review & pictures thanks to Nelson

Thanks to Joseph Christ