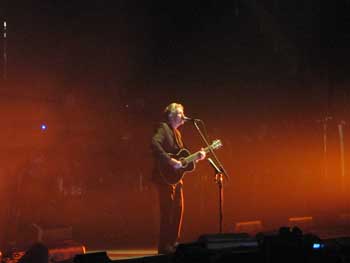 Well we got up to the Q at around 3PM there were not many people outside waiting maybe 10 total, so we decided to hit a few bars. 3 Beers and 2 tequila shots later my cold was getting a bit less noticable so at about 5PM we headed back to the venue and stirred up some conversation with some fellow Floydians. 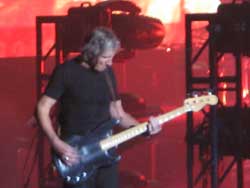 At right about 6PM doors opened and I was rather glad to be #2 in the doors as security at this point was not on their toes completely as their supervisor had to come over and explain what was and was not allowed in AFTER I made it through the entrance so they just rummaged through my wifes purse a little and thats all. Which was good as I had a camcorder and a camera, and I specifically heard as we got through the boss say NO CAMERAS NO CAMCORDERS NO NOTHING!! Pretty much but I was free and clear so who cares. Later as we walked around a bit I noticed they had hand wand metal detectors scanning people..

So we go check out the fine merchandise and as others posted, some nice things but a bit pricey. The leather coat is more of a baseball jacket, wool with leather sleeves. Darkside pyramid on front right side, and Roger waters tour on back in blue and red lettering…not the nicest and way too pricey but its a concert what do you expect? I skipped the merchandise as I had my video equipment on me and that in my opinion is the best souvenier you can get!! LOL 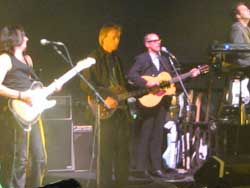 Well we head down to our seats on the floor dead center!! YESS!! Then we notice a few things, there is security everywhere around me. We had seats 3-4 and at the end of my exact row wouldnt you know security plants himself right there… And there were 8 other guards within a few feet on me in ALL directions!! Not cool… But anyways same setlist as all others have listed. Show opened started and finished the sme as all others have reported. Once the lights went down you could smell herb EVERYWHERE including from me. When the guard walked away everyone blazed untill he returned LOL.

The sound quality was astounding, we were positioned about 15 rows in front of the soundboard so it was clear bright and sharp. Sounded excellent no issues there. The light show was much more than I expected and others that have complained I imagine it is based on your location. For this show you MUST get close seats. At other FLoyd shows there are lasers all around you and at Daves tour lights were everywhere. At this show the lighting was onstage shooting out at you, so if you had a direct view it was very nice indeed. And the film quality on hte huge screen was high definition quality. Completely digital, very nice indeed. During the first set the whole screen is used, then during darkside most visuals are contained in the circle as the traditional “Mr. Screen” we all know and love. But the quality of the screen makes the images razor sharp and crisp and the colors are breathtaking in my opinion. 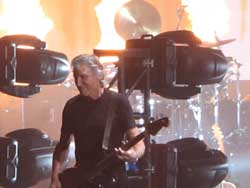 Highlights were of course the inflatable pig overhead which eye are lit up an eerie red, the insane amount of confetti that fell over everyone and created a winter like snowfall and lasts for a long time it was rather an amazing sight to see. The spaceman floating was cool also but for me the confetti was the nicest piece as it was everywhere and in such a huge amount it was insane.

Overall in comparison to all the FLoyd and Waters shows I have seen in the past my opinion is it is largely better than the in the FLesh tour. Not as good as the Division tour only in that some of the visual trickery I enjoyed more on the divsion bell tour, such as when the stage became an eyeball, and the other fancy effects. Also the lasers do add a lot as it kind of brought me into the experience more when they are all around you. But this being said this was without question of the hundreds of shows I have seen in my life, its easily #2 all the way. It was an amazing experience. The amount of energy Roger displays on stage at his ripe old age is amazing. He owns that stage when he is up there. He looked happy, aggresive, and honored to have all of us there. Honestly during in the flesh it appeared to me he was not “happy” where as on this show he looked as if he was a young Roger full of energy. It was truely an emotional show for me, it was very nice to see him first hand up close smiling and really enjoying hmself up there. 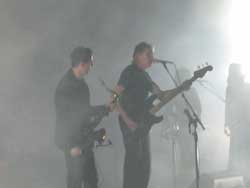 As for the rest of the band…. amazing talent all around, the sound was clear, crisp, and dead on. The guitar work of the new guy is without question skillful and professional. I myself was worried as from his pictures I had seen and video clips he appeared “cocky” to me but, after last night that impression is gone. He played Daves parts to the T and sounded not at all like a “tribute to Dave” but you could easily see he feels the music. They were all amazing, simple as that.

So after having time to take it all in was it worth it. Without question the imagery from last night with be with me for the rest of my life as every other Floyd experience had. It was a special night for me and a couple thousand of “my” friends!!

Thanks to Andrés Posada 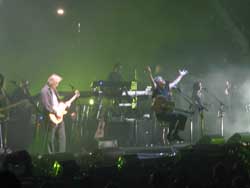 Great gig tonight, band as tight as ever, Snowy messed up the first 3 or 4 notes of Shine On but apart from that couldnt fault it.

Very loud and enthusiastic crowd, few booo’s during LB, but in the most part it was cheers all round.

After Roger sings the ‘mother should i trust the goverment line’ he’s started mouthing the words ‘ no fuckin way’ this is the third show ive noticed this at.

At the end of the show he commented on how he was given an item <a bag i think he said> when he was in Cleveland in 77 and has always used it and carried it with him and had it backstage.

Another great gig and a great crowd.

Thanks to Scott Frank

Thanks to Ilona Rose 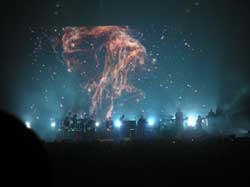 After seeing David Gilmour perform this past April in Toronto and Chicago, I was eagerly awaiting Roger’s concert at The Q. I was lucky to see Pink Floyd perform Dark Side Of The Moon in 1994, so I was also very excited to finally see and hear Roger’s version.

I took my younger sister, Julie, her first Roger Waters (Pink Floyd related) concert experience! We had great seats with good sightlines as
we sat in the lower part of the arena directly in front of the stage. 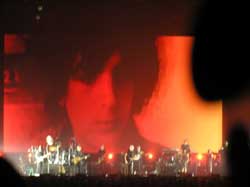 Upon entering, music was playing and the screen already had a backdrop of an old transistor radio, an ashtray, and a bottle of liquor. Occasionally, a hand holding a lit cigarette would change the station and new song would be played. I discovered later that it was of course, our dear friend “Pink,” brought back to life for Roger’s concert!

Suddenly the lights dropped as the band started into a barnstorming version of “In The Flesh!” The backdrop now had the marching hammers! The audience was going crazy. Roger was pointing out “the Jews” and “the Coons” in the audience as the flood lights swirled on the crowd.

Next was the song “Mother” and “Pink” was back on the screen in his room smoking cigarettes and flipping through magazines. “Set The Controls” was brilliant with a trippy solo from Snowy White. The screen took us back to the 1960s psychedelic era as bubbles dropped from the arena ceiling onto the crowd. 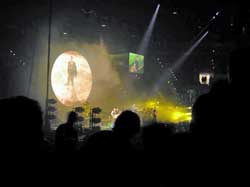 “Shine On You Crazy Diamond” was missing the first solo, but it was still a beautiful and haunting version. People in the audience were screaming “Syd” when he appeared on the backdrop. Having heard this song so many times live, I really enjoy Gilmour’s new, heartfelt version over Roger’s.

Next was a rocking version of “Have A Cigar!” Dave Kilminster played Gilmour’s solo note for note just like the album version. Good ol’ “Wish You Were Here” was next. The audience sang every word! However, it’s not the same without David Gilmour singing and strumming his acoustic guitar. But still good to hear. 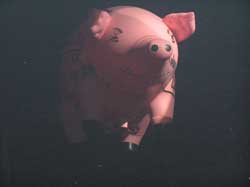 “Southampton Dock” was nice and I really enjoyed hearing “The Fletcher Memorial Home.” A very moving guitar solo. Now the screen had us walking down a corridor or hallway with pictures of old and new world leaders hanging on the wall. Next up was “Perfect Sense” and “Leaving Beirut,” which was just awful. The low part of the evening. Personally, I find it hard to listen to Roger’s solo music. Lacks melody. The first set ended with a powerful version of “Sheep” as the mighty pig flew over Cleveland once again!

I swapped seats with my friend, Bob, for the second-half of the show and was now sitting right by the stage! 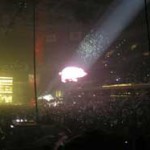 Heartbeat….”I’ve been mad for fucking years…” the audience went nuts. Overall, a great version of Dark Side. The quad sound was amazing with the sound effects. Highlights were “On The Run,” “The Great Gig In The Sky,” “Any Colour You Like,” and “Brain Damage/Eclipse.” “Breathe,” “Time,” “Money,” and “Us & Them” really were missing Gilmour’s & Wright’s voices and Gilmour’s guitar work.

Encores featured a nice version of “Vera” and “Bring The Boys Back Home” brought the audience to their feet. “Happiest Days/Another Brick Part 2” sounded great and had everyone singing “We Don’t Need No Education…” 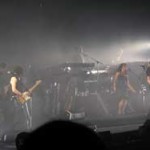 The show ended with one my favorite Floyd tunes, “Comfortably Numb.” Always good to hear live, but it takes two guitarists to replicate Gilmour’s incredible end-solo. Kind of silly for Roger to perform, I think. “Dogs” or “Pigs” would have been great closers.

Overall, a very good performance. Roger rocked Cleveland! Dave K. is a great choice as a fill-in for Gilmour. I liked his playing better that Doyle’s on Roger’s past tour in 1999. Of course, Jon Carin, was superb as usual, and Snowy White still amazes with guitar playing as well!

Thanks to Andrés Posada

Thanks to Steve Nagy

The eagerly-awaited Roger Waters concert tour will combine an evening’s worth of music with state-of-the-art staging, lighting and sound. Waters will utilize elaborate large-scale video projections and theatrical staging to underscore and accentuate the power of the music which is delivered via a state-of-the-art 360° quadraphonic sound system immersing the audience in a 3-dimensional hyperworld.

Set One will be a comprehensive overview of Waters’ music including early Pink Floyd material; classic compositions from the masterpiece “The Wall”; beloved pieces from “Animals,” “Wish You Were Here,” and “The Final Cut”; and songs from Waters’ solo tour de force: “Amused To Death.” 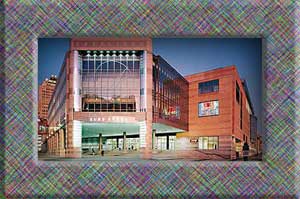