All images thanks to Bruce Mironov 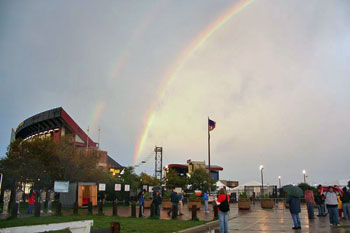 Rainbows over the venue about an hour before show time. 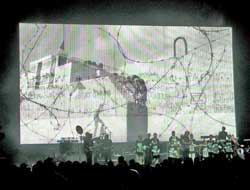 Just back in Manhattan from the Jones Beach show. Fantastic venue, open air no roof or any type of shelter from the rain which for the first 20 minutes of the show was blowing sideways on! Stage is right on the water, very unique venue.

The kids from Harlem came on stage again during Another Brick. Great sound excellent performance, few boos for Leaving Beirut.

Roger thanked thanked crowd several times during the show for bearing with the rough weather.

Pig was let off into the air again, first time I’ve seen it float into the sky and does look really cool.

No spaceman tonight, due to the weather I guess, but it did fine up for the latter half of the show.

Start of the second set someone at the front ofered Roger a hat to sign and he did!! never seen him do that before.

No missed lyrics tonight, band as tight as ever and they just seem to get better every gig performance wise.

MSG first night still the best of the tour so far though, I do think the show is a lot better in the indoor venues aswell! 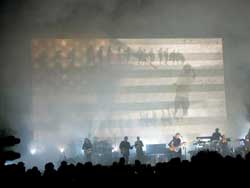 Obscured by clouds…. Our wish for a bright moon on this night was obscured by thundering, drizzly skies.I thought the show might not go on.

But in the words of Mr. Waters, it must, and did, to a full and somewhat damp Jones Beach Ampitheater.

There was a different type of electricity in the air for this show, this venue is unique in the fact that Mother Nature rules.

The rain was torrential as we were driving to the theater, but oddly, as we arrived to park, there was a bright opening in the sky, hinting that the rain parkas may not be needed.

It was not to be. The rain came and went. But it was never heavy enough to ruin the mood of the event, and seeing this event here was incredible.

For those of you unfamiliar with this venue: it’s on a beach, basically, with a stage on the water. On to the show…

So, the band arrived onstage at appoximately 8:30 P.M to a thunderous (no pun) packed theater. I was seated 7th row right, and behind me was 14,000 seats filled with very happy fans coloring the night with their rain gear of choice.

The set did not change. I was seated 7th row to the right of the stage, so my take on the sound may not be accurate. Again, the mix started weak, but keep in mind it was windy and rainy so getting a mix for a show like this must have been a crap- shoot. To my amazement, by the time Roger broke into “Perfect Sense” the sound was awesome. 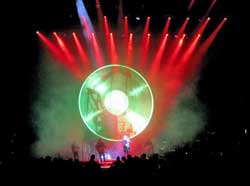 Roger was in better form tonite, he looked rested, and the band seemed to enjoy being out in the night air. The girls looked and performed beautifully, as usual. They all wore their hair long, which was a great choice as the wind just added to that beauty. Andy Fairweather- Low went with a straight black suit as opposed to the pinstripe attire he wore at both Madison Square Garden Shows.

After “Mother”, Roger spoke- “Thank you for coming on this dreadful night”. I must disagree- it was a beautiful night. As the sound washed over me, I would lift my face to the rain, and let it soak into the entire experience.

The first set went without a hitch, I did notice some extra space between a few songs, indicating they had to re- sync with the click tracks.

Roger roamed as usual, favouring stage left, but when he did wander our way, he was literally 15 feet away, all smiles and “Thank You’s” and posing for all pictures. He looked truly content and into the show. His bass guitar seemed strong in the mix, and I must point out that he did a bit more “experimenting”- playing some very tasty riffs while the other members were soloing.

There was no floating astronaut tonite during “Perfect Sense”, but the pig made his appeareance during “Sheep”, not by remote control, but walked around the venue with guide wires. During the outro of the song, they let the Pink Piggy go, and it floated away over the Atlantic Ocean as the song ended. Some lucky boater or beachcomber is going to be in posession of that deflated pig! Check E- Bay!

The “Dark Side” set was well executed. Nick Mason was missed, leaving Graham Broad on his own. He did a fine job. I thought the roto-tom solo during the intro to “time” was too busy, which is my main complaint on his playing. Too many fills… keep it simple! 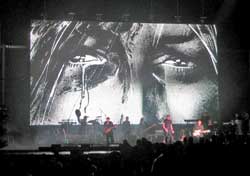 For the encore, Roger brought out “his boys” for Another Brick once again, and they seemed much more at ease this time around, dancing and fist pumping with more vigor than the Wednesday MSG show. The show was running late so he scooted them off the stage as opposed to shaking hands with each.

Comfortably Numb ended the show, and the wind wisped the stage smoke around and the rain made that much more magical.

To a raging applause, Roger spoke- “Thank You very much for being here- we’ve had a great time, Good Night”.

Seeing this show three times in one week? Wow.

Thanks to Col for maintaining an incredible site and posting my reviews!

Thank you Roger, Col and all the fans.

Even though the crowd in my section tonight SUCKED compared to the MSG shows, it was a great show…and I experienced a moment of pure joy and delirium when the pig escaped right in front of me, sailing off to the skies amidst lightning flashes…I was hoping to find it stuck on a tree in my yard when I got home, but with the prevailing winds, it probably flew to jersey…insane!

I also wanted to confirm that Roger is using film footage shot by legendary wave rider / film maker George Greenough during the “Dark Side of the Moon” performance. This is footage Greenough shot from inside the tube of waves breaking onto the camera lens, and is the same footage he famously set to Pink Floyd’s “Echoes”.

Thanks to John M. Schultz 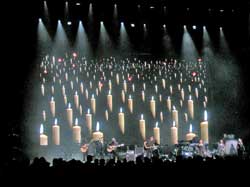 How special is a rainbow at night?

A rare occurrence indeed, but a fitting one that welcomed Roger Waters and company on this very wet, but enchanted evening.

Traversing pond-like puddles and horizontal rain the multitude of fans were treated to this meteorological unicorn upon entering the Jones Beach parking lot.

This was the first of many things this evening to leave me in a state of awe. What impressed me was that no one was complaining about the weather or even thinking about leaving. When the lightning crashed folks just turned their car CD players louder and opened another beer.

At around 8:30 when the rain had slowed and late arriving fans got settled Roger took the stage to perform a stellar first half of some truly incredible music aided by his famous circle screen of marvelous images.

Opening with The Wall’s, “In The Flesh” Roger greeted and outed his audience to their enthusiastic delight. “Mother” was next and the comforting sing-song chorus seemed to blanket everyone protecting them from the threatening elements.

Roger’s heartfelt tribute to Syd Barrett came in the form of, “Shine On You Crazy Diamond” and “Wish You Were Here”. This was extremely moving and played in front of a montage of clips warmly remembering our recently departed genius. 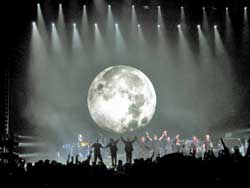 The Final Cut was represented with the beautiful, “Southampton Dock” and “The Fletcher Memorial Home” and these songs along with, “Perfect Sense parts 1 and 2 helped to ease into the tricky “political” part of the show.

“Leaving Beirut” a new song, was assisted on screen with a comic book recreation of a personal event that inspired Roger and it’s lyrics which were visible from the upper seats made the audience think as well about our government’s policies abroad.

“Sheep” closed the first half but not before it saw Roger taking one last shot at our faltering leadership. An inflatable pig was brought out and let into the air with all sorts of Democratic slogans and warnings spray painted on it, complete with an “Impeach Bush” tattoo on the animal’s backside.

After a fifteen minute intermission Roger came back on and gave us, “The Dark Side of the Moon” in its entirety. Do I have to say anymore? Those lucky enough to be there felt the blessing.

The evenings encore was a spectacular 1,2,3,4 punch of, “The Happiest Days of Our Lives”, “Another Brick In The Wall (Pt 2)”, “Vera”, “Bring the Boys Back Home” and “Comfortably Numb”.

After nearly three hours of unforgettable sights and sounds the show was over and it was, “time to goooooo” but while sitting in the parking lot waiting for traffic to thin, everybody got a chance to reflect back on what a truly rare evening this was. From the rainbow to the lightning to the pig flying high, we all received the message clear….from the stage and from above.

Thanks to Matt Parish