While not strictly part of Roger’s Dark Side Tour we have included it as such.

The world premiere of a classical opera written by Roger Waters, has opened in Poland, realising Roger’s long-held ambition to stage a spectacle inspired by the French revolution.

Roger dedicated the opera “to those who fought for human rights”at the opening of Ca Ira in French, or There is Hope in English, he spoke to the 12,000-strong crowd in Polish. 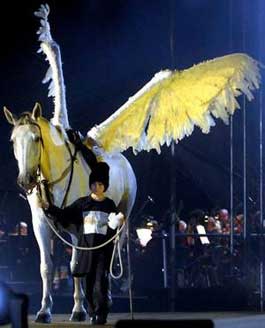 Thanks to Bob Close & Remigiusz Sikora 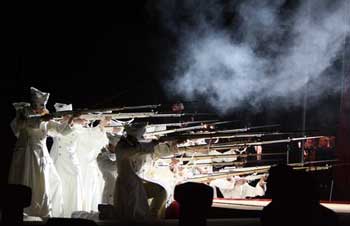 Thanks to Bob Close & Remigiusz Sikora

Ca Ira Premiere Rescheduled Roger Waters Management have confirmed direct to us that the world premiere of Roger Waters opera Ca Ira has been rescheduled from 7 July to the 25 August. No reason was given, but we assume the shuffle has something to do with Roger’s heavy schedule around the 7th July. (Thanks to Marek for the original heads up)

The world premiere of Ca Ira, will be held at the premises of the Poznan International Fair.

The project will involve a choir, an orchestra, soloists and more than 200 dancers from the Wielki Theater in Poznan. There will also be period elements of stage design (horses, carriages) and war scenes with soldiers and stunts. It is expected that over 500 artist will be involved, and the production is expected to cost 2 Million Euros.