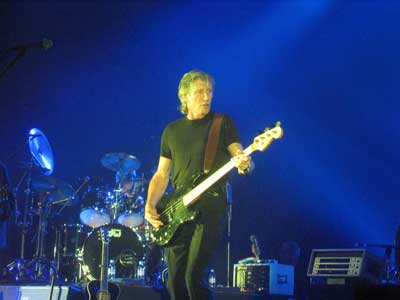 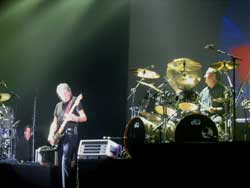 I am back from Cork and I am still very excited. I am not an easy fan to impressed having seen Pink Floyd, Gilmour and Waters several times before, but the concert last night was simply fantastic.

A small venue, we were 5.000 max, a smaller stage, and a power loss during “Perfect Sense part 2”. And that’s when the magic happened, we all went on singing, until the end of the song, 5.000 a cappella, magic, fantastic. “Southampton Dock” only guitar and voice was added before “Fletcher”. 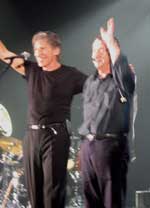 The problem was then fixed in 20 minutes for “Leaving Beirut” and “Sheep” and Dark side without intermission, the band as Roger said “has basically already had it”. The highlight of the second part was the man behind the second drum kit, the very special guest “for some months” said Roger, Nick Mason. His playing was powerful and great. He and Graham play in sync most of the songs, I am a drummer as well and I can tell you it is not easy. Most of the fills had the Mason’s typical great signature.

The fact of having Graham keeping the time allows Mason to take more risks than in the latest tours with Pink Floyd, and he did some impressive parts during “Us and Them”. He refused to leave the stage during “On The Run” and added some touches on the cymbals “one of these days style” staring at the two review mirrors on his drum kit in other to be in sync with the films. We have to say that when you take risks you can also make mistakes, and Mason did a few, with a big smile on his and Graham’s face. 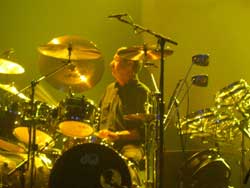 Waters was relaxed and smiling all over the concert, even during the power loss, this tour looks like great fun for everyone, the band of course, and as a direct consequence the audience.

Review with thanks to Enrico Soldatini. Enrico also has a review in Italian, along with some great photos at Italian Fan Club Floyd Channel 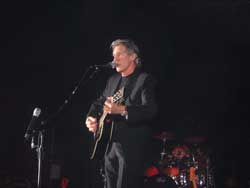 Few comments on the songs. The 2 numbers from “The Final Cut” were done with Roger on the acoustic sitting down, very nice. “Southampton Dock” doesn’t have as much participation from the girl singers as on the last show.

The opening guitar piece to “Shine on you crazy diamond” was all left out, first guitar part was the familiar 4 notes that come about 5 minutes later, don’t know if that’s the way it went throughout the tour so far, havn’t read the reviews that much. 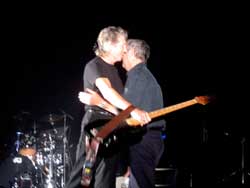 “Great gig in the sky” was really good. Carol Kenyon belted it out. Saw Mica Paris and Sam Browne have a go at this in recent months and they were horrendous. Last night’s version was top notch.

The power went towards the end of the first half so the band took the intermission early, came back and did “Leaving Beiruit” which Roger didn’t do any of the narration of the story, just the singing parts and “Sheep”, then straight in to “Darkside of the moon” with Nick Mason.

Roger was happy with the crowd and at the end said something like he was “fucken bowled over” by the reaction, I think, could have that wrong, was just heading out of the venue at that point.

Thanks to Shane ONeill

My what a day…

Drove from Dublin to Cork (6hrs – traffic around Mitchelstown and Fermoy is scandalous (for those that might know it))) for the gig last night and from the moment i walked in the two drum kits on stage set my heart racing!

Had been looking for directions to the Marquee yesterday and stumbled upon the Fleeting Glimpse site and it mentioned that Nick was expected to pay with him. had convinced myself all along that he would join him (fantasised I suppose) but seeing that one line of text made it more convincing.

I was travelling with a friend but didn’t let on to him… wanted to see the look on his face. was dropping hints when we got there saying “it certainly looks big enough to land a helicopter
(Nicks) here” but he didn’t seem to take the bait.

Boy, what a show (apart from the power cut). was surprised he only did three of his solo songs though (not counting the ones from the final cut of course). he really seems to be on a pink floyd buzz recently. wonder if he listens to much of it at home?

Ccracking set list all the best bits from some of the best albums (I guess hpoing for echoes (again) was a bit of a long shot!).

Thanks to Millar Hammond

Nick Mason is expected to play on Dark Side Of The Moon at this concert.
Update, He did!

Thanks to Mike Lacey 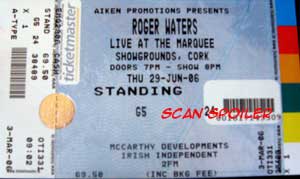 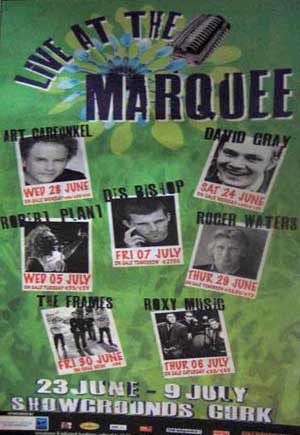 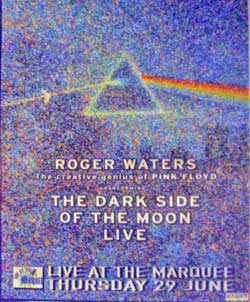 Above ticket, poster & ads with thanks to Marianne