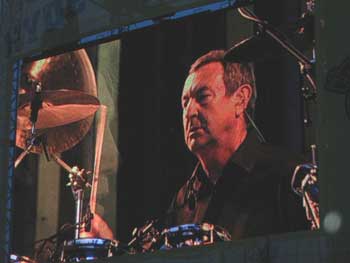 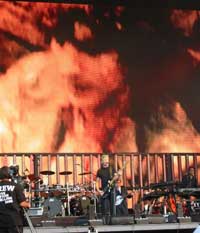 Just got back from Hyde Park and despite the utter disappointment of the soccer (which even Roger couldn’t do anything about ), Roger managed to really get the crowd going with an incredible performance.

I think even he was overwhelmed by just how much the audience enjoyed it – here’s hoping it might encourage him to play a few more gigs in the UK.

The staging was fantastic – I loved the flames during Comfortably Numb at the end.

I reckon there must have been nearly 100,000 there so he’s still a popular performer.

I didn’t see any evidence of lip-synching or else they covered it better.

Highlight was definitely DSOTM which was phenomenal. Dave Kilminster was on fire and is a very good replacement.

He played the same setlist that i have seen published , i don’t think there were any changes.

All in all – a great one 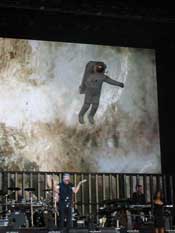 I had a superb view of the stage.

The show itself was something else – the crowd were really hyped. Too many brilliant moments to recall but I’ve never seen Nick Mason look so bloody happy!

Anyone in else feel the heat from the flame throwers? Wow!!

He probably was faking his vocals on 3 songs but if I didn’t know in advance I wouldn’t have spotted it (and I was watching him lik a hawk!). The irony is, his vocals on everything else were bloody good – he really *doesn’t* need to do it! 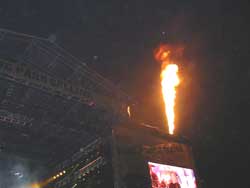 On a beautiful summer’s day we set out for Hyde Park in central London. Although we left early to ensure that we could watch the England-Portugal World Cup football match, the diabolical trains meant that we had little time to spare.

A big thumbs down to the organizers, as it took us ages to find the entrance to the concert. When we finally did, the stewards told us that the box office was on the other side of the park, so we had a long walk and a mammoth queue to collect our tickets.

The organizers kindly provided a giant screen for the football, however it couldn’t make up for the incredibly bad choice of support bands. I only caught Starsailor (boring) and Texas (the pinnacle of sh*tness! The highlight of their set was when someone threw a shoe at the singer), but I was disappointed that there were no bands booked that would have been more suited to Roger Waters’ fanbase, especially since the Roskilde show in Denmark on the 2nd has such a superb line-up.

We managed to catch the second half of the football, then extra time and the penalty shootout. Unfortunately England lost, which subdued the crowd somewhat.

Thank God for Roger! The sense of anticipation was immense, and it was clear that the vast majority of the 30,000 or so crowd were there to see him. Everywhere we looked there were Waters, Floyd, Gilmour and Barrett t-shirts, and the bright sunshine meant that we saw a fair few Pink Floyd tattoos on display. People of all ages had travelled from all over the UK to be there, as it was Roger’s only show over here.

Before Roger came on there were a few Bob Dylan and Neil Young songs played (Dylan: Blowing in the Wind, Don’t Think Twice It’s Alright, The Times They are A Changing. Young: Helpless, After the Goldrush, Only Love Can Break Your Heart, Southern Man and several others I can’t recall). He was about 15 minutes late, and then In the Flesh kicked in with HUGE guitars and towers of sparks (the pyrotechnics throughout were fantastic).

Roger was on great form, prowling the stage and thrashing out the basslines. His vocals were excellent, and I’m positive I saw no signs of lip-syncing.

The atmosphere was mind-blowing. The crowd sang along with every word and applauded every statement Roger made in his lyrics. Dozens of people held their joints aloft when he said “There’s one smoking a joint”. “Mother should I trust the government?” was met with a resounding “No”. There were cheers when George W. Bush appeared onscreen in the excellent video to Fletcher Memorial Home, which was a song that had gained new resonance with recent world events. The anti-war message throughout was full-on, and Roger sang every word with utter conviction.

Set The Controls was hypnotic. The girls’ backing was great, and the footage on the screens of Pink Floyd in the 1960s was the perfect accompaniment. As the song ended, there was a fabulous slow-motion shot a youthful Roger falling to the ground in a field of hay, taken from the promotional video to Scarecrow.

I enjoyed Leaving Beirut, which worked well with Roger’s introduction and the accompanying comic-strip animation. It was very well received by the crowd, as was Perfect Sense.

Perhaps the reaction will encourage him to bring out a new album soon!

When the riff at the beginning of Have a Cigar kicked in there were massive cheers. It was fantastic to hear Roger perform this song, and I think he did a great job of the singing. This song had a really great, heavy ending with a massive riff. 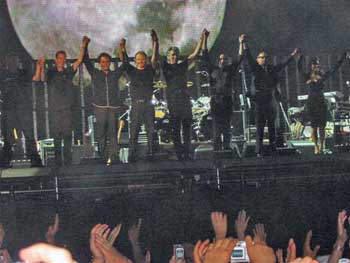 Sheep, again, was met with rapturous applause. As the song started, it sounded like the whole crowd in unison said “YEAH!” and then joined in with the bleating noises. This song sounded HARD! Roger’s performance was top notch, and the middle section with the bastardised Psalm 23 was truly eerie. If I had to pick a favourite song (and it’s difficult) I think it would be this.

As the first half of the set ended, Roger announced that Dark Side of the Moon would be next. The crowd seemed to be in a daze throughout the intermission.

As Dark Side of the Moon began it was getting dark, and the moon could be seen in the sky. The whole performance of the album was phenomenal. Too many highlights to mention! Utterly breathtaking throughout. On the Run was a knockout moment, with the surround sound completely blowing everyone away. Roger seemed really happy to have Nick there, and it was wonderful to see them onstage together.

After the second half of the set, everyone took their bows and Roger thanked the crowd. It seemed like he’d had a great night, as had everyone. As the band left the stage Roger said “We’ll come back”.

When they returned Roger introduced his band. Harry Waters got a big cheer when the screens showed him with his enormous beard! Everyone’s performance was spot on. The trio of guitarists I thought were particularly impressive, although I was disappointed not to see more of the ever-dapper Andy Fairweather-Lowe, and his cool Vox Teardrop guitar.

The encore consisted of songs from the Wall, a barn-storming rendition of Another Brick in the Wall Pt 2, followed by Vera/Bring the Boys Back Home, which was very poignant. Then to top it all, Comfortably Numb, complete with pillars of flame on top of the stage. What can I say? This was sublime!

Overall, after seeing one of the In The Flesh shows in 2002, this concert definitely rocked harder, and Roger was a true showman. It’s a shame that the England football team lacked Roger’s passion. If they’d put in half of what he (a man of 62, nearly three times their age) did, they’d have won the World Cup!

Sorry if I waffle on about the football, it was gutting! It’s a shame Roger isn’t playing any other dates in the UK, I could happily see him every night!

Review thanks to Natalie Lyons 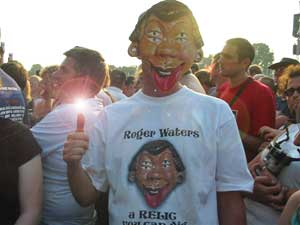 The legend continues! The one & only Albert Magoolie at Hyde Park dropping in to say hello to Roger & Nick?

All above show pictures thanks to Andy McDonald 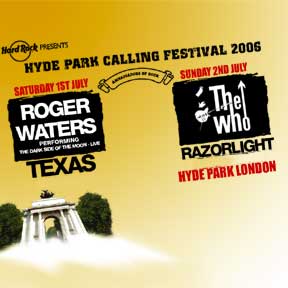 Nick Mason will join Roger Waters In Hyde Park. Nick Mason will take on the drumming duties for Dark Side Of The Moon at Roger’s concert in Hyde Park London on 1 July. This is the third gig where Nick has agreed to team up with Roger on his upcoming tour. The others being on 14 July at Magny Cours France (French Formula 1 Grand Prix). and Reykjavik on June 12th

Roger Waters performing Pink Floyd’s ‘The Dark Side of the Moon’ as part of his set for the only time in the UK this year and The Who, playing a full set in London’s Hyde Park for the first time in 10 years are the headline acts for a magnificent new two-day festival taking place in London’s Hyde Park on Saturday 1st and Sunday 2nd July.

Hyde Park Calling, produced by Live Nation and sponsored by the Hard Rock Cafe, will be a unique and historic musical event with a main stage, second stage and many surprises in store for music and festival fans of all ages. Razorlight, who – like The Who and Pink Floyd – were amongst the most memorable acts at last summer’s Live 8 show, will also be performing along with Texas. Roger Daltrey met Razorlight at Live 8 last year and was so impressed that he’s delighted they will join The Who on Sunday 2nd July. “They’re a great band who I love and the kids love,” says Daltrey.

Both day tickets and weekend tickets will be available – £42.50 per day or £80 for the whole weekend. Gates will open at 3pm each day.

Tickets are expected to sell out very quickly so a special offer has been set up through www.ticketrush.co.uk where tickets can be purchased by SMS. After registering, festival-goers will receive free SMS alerts on-going so they will be the first to know about great concerts. There is also a chance for the first 100 purchases of Hyde Park Calling tickets through the SMS method to take advantage of a fantastic 2 for 1 ticket offer. Furthermore, two VIP packages to Hyde Park Calling will be up for grabs for one lucky person who registers their details with Ticketrush.

The Who will close Hyde Park Calling by headlining on Sunday 2nd July, a year to the day since they performed a dynamic set at Live 8 and almost 10 years to the day since they last appeared in Hyde Park. The band, who remain one of the most exciting live groups in the world even in their 4th decade at the top, are working on a new studio album which is due for release later in 2006 and would be the first new album for 23 years. The Who are an integral part of British rock history and this London show will be unmissable. Razorlight are the first band to announce that they are also performing on the Sunday.

Who singer, Roger Daltrey, said: “Judging by the recent success of the Tommy/Quadrophenia DVD, there’s a large audience of young people who have never seen The Who live. This will give them the chance. It will also give me the chance to play with the band I love. Maybe for the last time. No one plays the music we created better than we do. I’m going to enjoy it.”