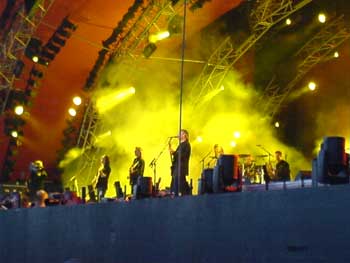 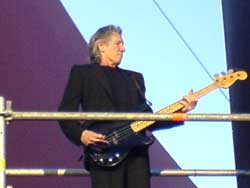 I went to see Roger perform at Roskilde and it was truly amazing! Roger looked very energetic and quite enthusiastic about being there, and that made that show rock from the second that we heard the words “…eins, zwei, drei…”.

I had been in a queue for hours, actually Franz Ferdinand was playing at the same venue just before that, and you could really feel the great anticipation from the many fans wearing all sorts of Dark Side T-shirts.

When I got in, I managed to get myself way in front of the right side of what is known as”The Orange Stage”, which proved to be one of the best spots. On several occasions Roger was only a few feet away from me and I managed to get some great pics of it. Fantastic to see him, he really looked great 🙂 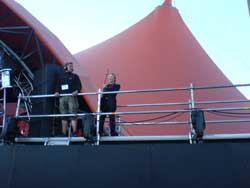 The set was excellent. Dark Side, of course, was great, although I really missed the slide guitar during Breathe and such, but anyway, the fill-in’s – Dave and Kilminster did it okay. But none of them have the skills of a Gilmour. Jon Carin sang well, made a mistake in Us And Them, otherwise really good. Sheep, Another Brick and Perfect Sense were some of the other highlights. PP Arnold knows her stuff! In recent time I have become more aware of Amused to Death – really a great record.

I couldn’t stop thinking, that I was somehow cheating on Dave going to this show, ’cause I really missed him there, and compared to his show in Albert Hall, this one maybe didn’t sound as good, as far as Breathe, Dark Side in general, Shine On and Comfortably Numb is concerned. It simply doesn’t sound as good without him. But maybe you just can’t compare them. However in many ways this show was better. He really gave an excellent performance, especially the Wall tracks were raving!

Thanks to Christian Pedersen

Thanks to Christian Pedersen 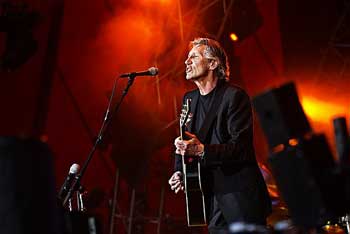 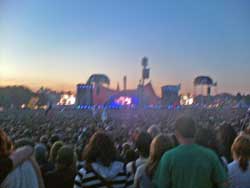 Roskilde festival in Denmark is at the present time the oldest running festival of them all. The city of Roskilde first saw the grassy fields of dyrskuepladsen (the animal fairgrounds) filled with people in the summer of 1971. Then only a 15,000 attended what was then known as “Sound Festival”. Since then the festival has reoccurred without interruption and with an astounding array of international and local artists and performers and always housing at least 90,000 attendants in the vast grass plains that surround the festival ground. Roskilde Festival is internationally know to be one of (if not THE best) rock music festival of the world.

Anyone who is or has been important to rock and contemporary music has attended the festival over the years, Paul McCartney, Bob Dylan, U2, Aerosmith, Nirvana, Brian Wilson, Guns and Roses to name a few but the festival has never been visited by the Pink Floyd (unless you count Gary Wallis who was misfortunate enough to bang drums for Danish plastic-pop group Aqua in 2001, two weeks prior to the bands break-up). 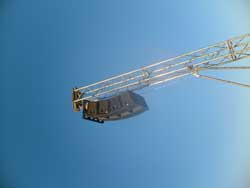 I spoke to long-time functionaries about the lack of Floyd at the festival. It was printed in the press that the band had been on wish-lists for many years (including holding the nr.1 spot in 1974) but the band never made it out because…

“They always requested that they wanted to use their own stage”, instead of the legendary orange canopy stage. “The Floyd has nearly been booked at least 4 times over the years, but each time it ended by the band not appearing!” And all because of the stage and the stage show. 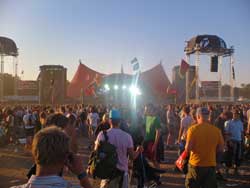 I myself was incredibly amazed to find out that Roger was booked for the festival back in February and it also gave me a slight feeling of scepticism since I know how the band works in terms of lighting and sound. Would Roger actually play a full set or would he be forced to cut it down in length to suit the normal show schedule? Would he be able to fulfil the ominous task of performing “Dark Side of the Moon”, without compromising? Could Roger recreate this musical masterpiece without compromising?

My source at the festival soon eased my mind with two pieces of information which laid my doubts to rest: Roger and the festival had agreed that Rogers tour crew would be allowed to set up an additional set of surround speakers around the stage so that the show would be (or rather contain) quadraphonic sound! Second: Roger had full playing time! I bless the man who agreed to this! 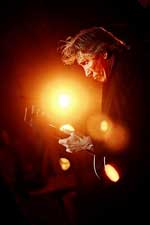 Franz Ferdinand is finishing their encore as we enter the ground around Orange Stage.

I gaze upon the new speakers that now are placed around the ground. We find a suitable place on a platform at the far back of the grounds where we have perfect view of the enormous mass of people which have gathered in front of the canopy stage.

The sun is slowly setting from yet another hot day! There are people everywhere. I would guess that some 50,000+ have come down to see the show. From kids aging 15 and up to rockers old enough to be my grandparents. The crowd is packed, the mood is good, the sun dims, a sweet smell of hashish pass by me as the stage suddenly begins to hum. “In the flesh?” is underway. 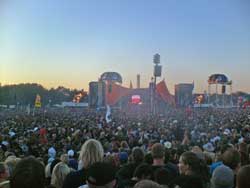 I see Roger walk on to the stage in a massive roar of applause. I can almost detect surprise in his eyes! Not even I thought so many would show up. Roger says hello and good evening, picks up his bass and asks “Are you ready?” EIN ZEIW DREI OGO! And like shot from a canon we are propelled back through music history.

In The Flesh, Mother, Set The Controls For the Heart Of The Sun, Shine On You Crazy Diamond, Have A Cigar, Wish You Were Here, Southampton Dock, The Fletcher Memorial Home, Perfect Sense parts 1 and 2, Leaving Beirut and Sheep. One gem after the other, in a necklace of musical perfection. People around me have never looked happier. We all stand there smiling and singing. The crowd freaks out every time the surround sound kicks in. People turn their heads as if looking for the source of the sound. Roger sings “Leaving Beirut” and receive a massive applause after singing “Oh George! Oh George! That Texas education must have fucked you up when you were very small”

All too quick the first set ends and the band go off stage for the first performance intermission I’ve seen at the festival so far! I scuttle of to empty my bladder and fetch a cold beer. 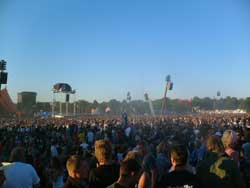 The remaining half of the show is basically a blur for me and that has nothing to do with the beer I drank. If the first half of the set was emotional then the second set left me complete out-of-breathe. I’m not a particularly emotional person but I realised that I began to cry as Roger finally bid us farewell with Comfortably Numb. Perhaps I should summarize it: “Perfect!”

I’ve visited Roskilde Festival for 11 years now and I have NEVER experienced anything like this. Roger Waters performed a show so perfect that only the most pessimistic nitpickers would object to the brilliance of the performance. I have decided to forgive Roger for calling himself “the creative genius of Pink Floyd”, because it so seems the man is right.

And one final note: A film crew was running around the festival ground with big cameras during the concert and they were NOT from the festival!!!

Above review & pictures thanks to Alex Ahlstrand. 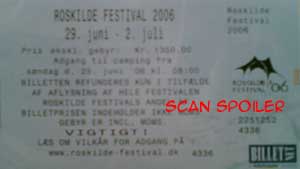 This show was a Year to the day since Live 8!