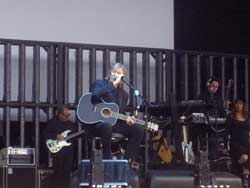 Just got back from Berlin. I’m exhausted, but here’s a little review.

I read the first review available on A Fleeting Glimpse, and whoever wrote it is pretty accurate in every aspect. There were some mistakes in the show (Someone noticed anything strange in the intro to time, did Broad miss the beat???), the one in happiest being the strangest: “you yes you!” started without him being on the mic; he seemed surprised; run to the microphone and then i thought it was really him who was screaming but im not sure. 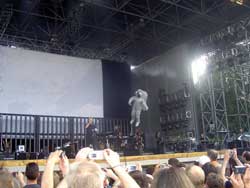 It’s not a mistake, but there was no guitar intro to Shine On, as it started with the “Syd theme”, you know ta ni na ni… That was a pity, but then the song developed very well indeed, with the guitars of Snowy and Kilminster in a utterly beautiful duet.

Sheep was definitely a highlight, as was Leaving Beirut, I really found it enjoyable and certainly deep. Have a Cigar was really nice, the guitar fantastic, and I dont want to know if he lyp-sinched or not.

The songs from final cut were properly done, and singing along with Fletcher memorial proved to be fascinating, as the connection between those of us who knew the lyrics was great. We were looking at each other, like thinking “he should play it all and not dark side”… but hey, dark side is a true masterpiece nonetheless.

ANYWAY, the second set didn’t achieve to move me too much, even though I love the album I think they should have made some changes to it. It was too accurate and clinical. Surprisingly, On the Run was wonderful, with the quad sound being used at full and some nice animations referencing Stanley Kubrik and 2001. The rest was very predictable in my opinion. 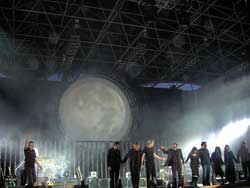 Jon Carin masterful as always, singing vey well lots of Davids parts (Us and Them for example), and of course Any Colour, which I really wanted to see live and didn’t let me down.

Overally, great show. The pity is that I was expecting an extendend version of Dark Side, and I found a accurate one. Well, we cannot have everything…

First set, A++ almost brought me to tears a couple of times.

The crowd was very nice and the atmosphere was very cozy and very familiar.

The t-shirts cost 30 euros in contrast to the 20 pounds of David, but there was also a fair selection, I bought the one in which he appears, when he was young, in black and white, quite nice… there were others with dark side symbolism, also interesting but somehow shallow.

And the rest is history. I hope the tour gets better and better all the time and enjoy!!

(by the way, the astronaut inflatable was nice, but it the guy leading it with the ropes was so visible that it was funny… well done anyway) 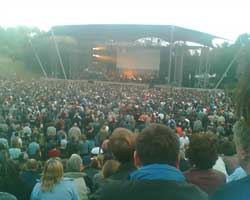 The Wuhlheide in Berlin is a fantastic location for an Open Air show: like an old amphitheatre! The weather was marvellous with a blue sky and an almost full moon wandering over the top of the stage, while Roger performed ‘The Dark Side Of The Moon’ – what an impression!

The first part of the show included besides the 2 parts of ‘Perfect Sense’ and the new song ‘Leaving Beirut’ only songs from Waters’ Pink Floyd era. So even less solo songs than during his last tour. Why? He could play a whole evening only with his solo stuff!

The show started at 7:41 pm and the sun was still there, so that you could hardly see anything on the huge screen (exception: Leaving Beirut). But in the second part, you could see all the videos. 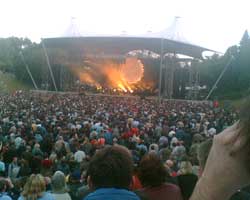 Roger had a few problems with his voice and he sounded sometimes really hoarse. His band was really good, with the exception of a certain Dave Kilminster. He had nothing better to do than whirling around his long hair and dramatically rising the neck of his poison-green guitar. That was ridiculous! Better would have been a bit more concentration on his guitar playing! In the end, you could see(hear), that even 2 guitar players (a questionable Dave Kilminster and a great Snowy White) couldn’t bring back the magic of one David Gilmour.

Interesting though, that the fantastic Andy Fairweather Low was even more in the background as on the last tour. Anything else: Business as usual. 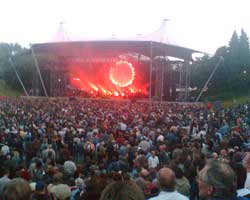 They played a good show, that will be remembered for the new stage design. I loved especially the following songs: ‘Have A Cigar’, ‘The Fletcher Memorial Home’, ‘Perfect Sense (II)’, ‘Sheep’, a very dynamic ‘Us And Them’, ‘Vera’ and ‘Bring The Boys Back Home’. Sadly enough, the best song and mainly the highlight of every show, ‘Comfortably Numb’ was because of the participation of Dave Kilminster nothing special.

After 140 minutes of music the show was finally over. All in all a good show, but for some reason I still have this question of one of the fans in my ear: ‘Was this a Pink Floyd coverband with Roger Waters?’ There’s nothing to add to this!

Thanks to Hans-Juergen Mueller

Backing track to begining of Happiest days got messed up showing clearly that Roger doesn’t in fact say the words “You yes you, stand still laddie” which surprised a lot of people , or maybe not

Kilminster just gets better Any Colour You Like being his highlight. I think. he had a few tech problems but all sorted our soon.

They also brought on a 15 foot inflatable spaceman during Perfect Sense controled by a guy backstage, filled with helium, everyone from the crew came out from backstage to watch it,

I was there, and I enjoyed the show very much. Unfortunately it already began at 7:30 in the daylight. For the first couple of songs it was nearly impossible to see the pictures on the screen. 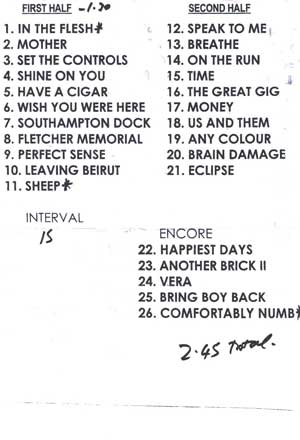 The actual set list as used by Roger. With thanks to Torsten