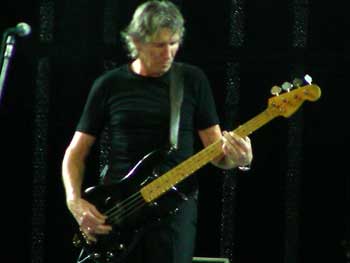 Without any of us in Malta knowing, and also seriously doubting whether Roger knew, the concert in Malta was the first concert after the death of the legendary Syd Barrett. We certainly saw no special emotions from Roger during Shine On You Crazy Diamond and Wish You Were Here.

The grounds at Pembroke were packed with over 13,000 people all ready for the show whilst the full moon shone brightly just to the right of the stage, almost knowing that Roger was about to treat us to the full live version of the Dark Side of the Moon.

Two slight mishaps to one of the wireless microphones being used by the ladies on stage caused Roger to twinge but he soon recovered and a quick and transparent change of mike soon remedied the problem.

The set list was the same as the previous concerts and with the a number of government officials present, including the Maltese Prime Minister, it was no surprise when the fans booed on the question “Mother should I trust the Government?”

Having recently attended the Verona concert (5th June) I was obviously looking for changes and surprise. The stage was set to perfection but there was one BIG difference and that was the Maltese public.

Roger seemed quite surprised with the fans in Malta and his show of hands and his peeking at the amazing number of people made him give us a special show. Remember that Malta’s population is only 400,000 !!!

He continuously thanked the fans which knew and obviously sang most of the songs with him, probably much to his amazement. Then came the turn of my favourite Set the Controls for the Heart of the Sun, Leaving Beirut and Sheep then concluded the first part of the set in preparation for the Dark Side.

During the interval, the by now politically charged crowd, actually booed the Prime Minister when he was shown on the side screens for 20 seconds, not more !!! On realizing this, the organizers quickly switched off the monitors.

The Dark Side of the Moon was played to perfection, and the full moon ambience added to the scenario. The expected rain showers never turned up and all proceeded well to provide an evening to remember for all present.

The encore was the same as the last concerts with Comfortably Numb stealing the hearts of the Maltese who, by now, were an all standing crowd, roaring Roger ahead.

For the record, ex Marillion frontman Fish, a very regular Maltese visitor, was present for the show. Roger remained on the island for a break and it was rumoured that he was seen on a sailing boat out on the Med this afternoon, with most of the band.”

Well all I can really say is the concert was wonderful , more than I expected.

Roger gave a grand show and was in great form (don’t now if he knew about Syd as he didn’t mention anything ).

While he was playing Shine On there was a wonderful full moon on the right stage it was magical.

He played with the usual line up. PP Arnold singing on Perfect Sense was divine.

I do prefer however the In The Flesh line up, although the stage performance was much better this tour. I think this current tour was a more Floyd like while In The Flesh was more intimate Waters style.

About the lip synch. Whoever said that needs some glasses.

A friend of mine who came to the concert but isn’t a floyd fan said he couldn’t believe that it was live, as it sounded perfect. I just can’t wait for another tour and an opportunity to see him again.

There are rumours going around that David Gilmour is coming in September although I doubt it. 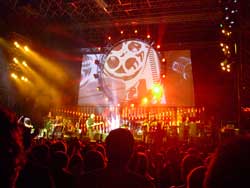 Above images thanks to Steve Spiteri who tells us that Roger did not know that Syd had died. Steve said a good friend of his was with Roger and some of the band members, including his son Harry on a boat trip around the grand harbour. Steve then phoned his friend to tell him of Syd’s death, and that’s how Roger found out

Thanks to Vince Saliba 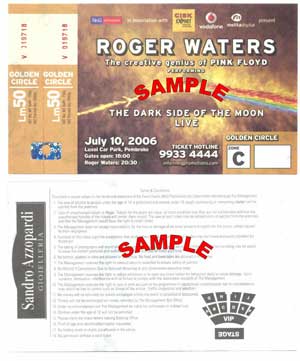 Thanks to Vince Saliba