We are please to report that most, if not all refunds have now been made.

We are advised that this is the sequence of events.

8 – 10 July Solex Plus promised to refund money. – Some refunds given.

13 July. Phone calls to Solex Plus are being met with ‘there is no money today, try tomorrow’. 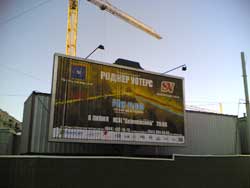 Here’s what we know about the show that never was in Kiev.

A show was promoted widely in Kiev and on the internet, claiming that Roger Waters would perform his Dark Side Of The Moon Tour in Kiev (Ukraine) on 8 July 2006.

Tickets were sold, and we assume the Olympic Stadium was booked, as it appears that at least one giant advertising hoarding was erected at the stadium. (See above)

About a week before the scheduled date, this site received an email from somebody who said he was representing the promoters of Rogers show previously held in Moscow , who were also promoting the Kiev show. The email stated that the Kiev show had been cancelled, and asked us to publish this news on A Fleeting Glimpse. It’s our policy to always try to verify as much information as we can, so we urgently emailed Roger’s Manager to confirm that the show had in fact been cancelled.

Roger’s Manager immediately replied, and told us “There is no Roger Waters show in Kiev and more importantly, never was”. We then published this news on site.

The promoters representative then contacted us again, to advise how people who had purchased tickets could obtain refunds. That information was placed on this site, and appears directly below.

The promoters give their apologies about the inconvenience.

We then started to receive emails from people who had been trying for refunds. Saying things like “People are trying in vain to return tickets & get back their money”. One email stated ” I was in Kiev on business last weekend and tried to get the money back, after some 2 hours the ticket office ran out of currency so everyone was told to come back the next day. On the Sunday we successfully managed to get a refund”.

Another stated ” about 38,000 tickets were sold in Ukraine on this ‘concert’. But only about 10% of people could get refunds”. We are not sure if this is still the case.

In another development, rumours started to surface about possible negotiations for a concert in Kiev in September. (One report claiming it would be a Dark Side Of The Moon Concert, another claiming it would be Roger’s opera Ca Ira!) Of course. we checked this out with Roger’s Manager again, and here’s the reply. “Neither MFM Ltd. nor anyone associated with Roger Waters is negotiating with Solex Plus for Roger to perform in Kiev in September or any other date.”

So, that is the situation as we know it. We really feel for Roger’s fans in Kiev, but on the information we have, neither Roger or his Management are in any way to blame for this sad state of affairs. 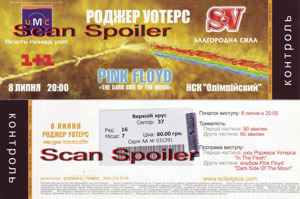 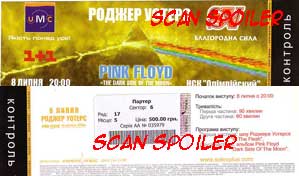 Ticket scan thanks to David Sears

We wish to thank Ivan Sedlovsky for the pictures and assistance with this story, and to Simon Gibbons for additional information.