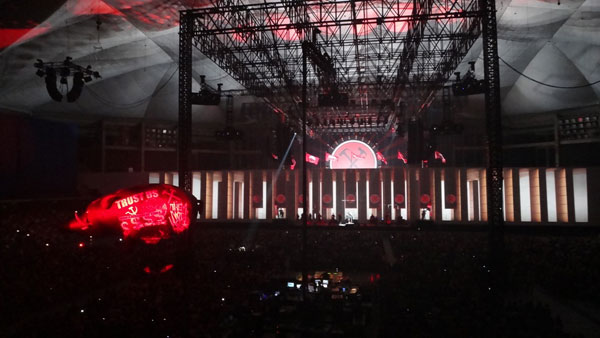 Another great show tonight, the venue was set up a little different to last night with big sheets covering the top tiers on the left and right sides, they obviously did not sell as many tickets but this added a couple of bonuses to tonights show, firstly the sound was definitely better, second it felt a little more personal to those of us there. Our seats tonight were further back and allowed us to really enjoy the overall show and wall projections as opposed to last night where we were quite close and very focused on the band, I am torn between the best position but lets say that between the two shows (and the others i’ll be seeing) I have seen a perfect mix of the best elements. I will say though that wherever your are sitting for this show, you will not be disappointed. Tonight, I was on the lookout for shadow guy and was very pleased when we spotted him (and the famous boxing cats), there is just so much to see here.

The structure was definitely in the way (see photos) but to be honest, it didnt take anything away from the wall or the show at all, there is just so much going on that I never really noticed it until I took a photo. The cables dropping to the mixing desks were more of a bother, why didnt they just run these down a column and accross the ground? Anyway, another fantastic show that ran perfectly from where I was sitting, the crowd were great and got into it more than last night, the sound was incredible, Robbie sounded better imo (he is brilliant in RLH) and Dave was unbelievable as usual.

Above review, & pictures thanks to Dean Anderson 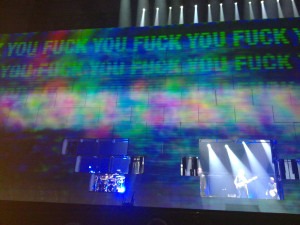 As I left the Dome in Perth at midnight after the final Wall show on Saturday, having seen both show’s, I was quite emotional. I will not see the Wall again, nor Roger Waters.
Who would of thought the most isolated Capital City in the World would ever witness The Floyd’s music again after 1988. Well blow me down, Roger Waters played my home town on Feb 9 07, well when that was announced I was blown-right away.
Then years later an amazing thing happened-RW said he was touring The Wall. Well that was a great day in PF history alone, but for when finally Australia was confirmed as a stopover, my heart sank just a little further. Creating arrhythmia was when Perth was nominated as a tourdate. Even after my ticket was purchased I kept repeating that one time was just not enough. And then there were two..someone call a doctor!

Now it’s officially behind me I’ve had the chance to ponder, wonder and generally trek my way down from cloud 9. Pink Floyd The Wall was performed for me by the man that wrote it, created it and played on it. who would of thought indeed.

Simply walking around the corner of the stadium too first glance at The Wall was breathtaking, sitting 5 minutes before In The Flesh is blasted at you is surreal. Roger walking onstage was stuff made of dreams for me. The Thin Ice was magical, I was skating on thin Ice holding back the tears. When Daddy’s flown across the ocean-that’s where I came unstuck, and most of the people around me. People wiping there eyes was common, It was hard too not get emotional if you’ve had a similar situation or even empathise with the situation. I was so mindstruck that I didn’t see the giant Mother appearance at the back of the wall too the left, rotating it’s head scanning the audience. The second night allowed me too look away enough too catch it. Quite scary looking. Its during Mother that everyone gets the full power of what these projections can achieve, synced on both circular screen and The Wall together seamlessly.
The moving Teacher inflatable that makes an appearance is so large and very realistic. The kids onstage ushering to leave them alone with hand gestures was very cool. But what was a highlight for me was RW nod too his balladeering days with his new re imagining of Brick with new versus in an acoustic style not dissimilar to Dylan, in the style of Knocking on Heavens door, after brick proper.
Gerald’s Image’s are so Vivid in HD and a thrill to see the Falling Bombs, Marching Hammer’s and Sexual Flowers in full form as intended. The pulsating heartbeat sound’s are awesome accompanying the Flower display, complete with new stems that cover the entire Wall.
Young Lust is very well represented with great rock gusto, sexy images and was a further highlight in act 1.

The Wall is built before you with the absolute minimum of notification, you simply hardly notice. When it is built, with clever projection making you think there is quite a bit too go, you simply ask where did that come from. 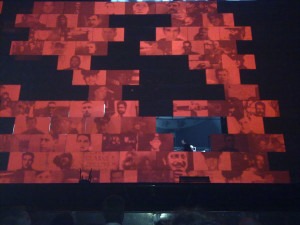 In another nod too the original concert Hey You is completely behind the Wall with us left to simply look and listen. When the band reemerge they are lined up right across the stage, with full Wall regalia on, menacingly looking as if a dictators close confidants. They don’t gesture much staring at you with Aviator Sunnies is quite intimidating. A huge platform with the furniture affixed to it is lowered encompassing around 10 bricks, and a certain highlight is RW singing Nobody Home from this room, looking quite relaxed. Loud cheers of YES were heard when asked Is There Anybody out There..Then my second unstoppable gush of emotion came when Vera is accompanied by the Images of Children being reunited with there serving parents at war. Numb is Numb. simply nothing other than a Spectacle with a guitar solo that cuts through you, as was originally intended all those years ago. To hear RW sing his part is a moment in bedded in for life. My favourite song, by my favourite band, performed in front of me at the same age as RW wrote the Wall, and with my Father in attendance.
R.L.H was my moment to armfist, clap and too feel as others had felt back in 1980, and too as RW put’s it..Enjoy Yourself. I do also like the Black colour of the Pig, and the writing was easy to make out, and not as ‘tagged’ as the last tour.
Every person can potentially walk away with a piece of this concert in the form of the Moon, Shell, Crucifix, and $ sign shaped confetti that is released to an unsuspecting crown. Yours to keep. They are everywhere.

The inevitable happens and that wall does come down and the Band reemerge to sing beautifully about ‘some buggers war’.
Then as with all good thing’s it ended. It’s rather hard too walk away from The Wall, as this is your thing and these are my people, never too be seen again.
Thankfully the Tour is documented here for future memories, but those memories are still exploding within me, and for a long while too come.

Above review & pictures thanks to Brad Noack 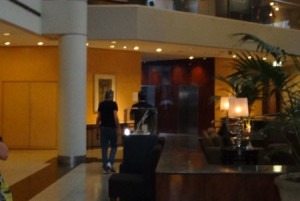 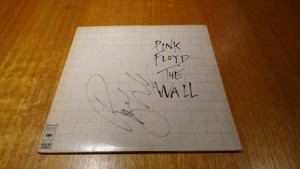 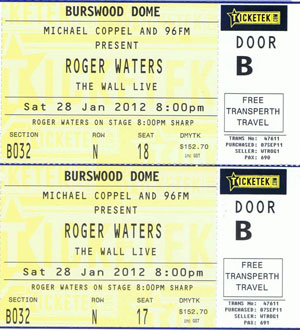