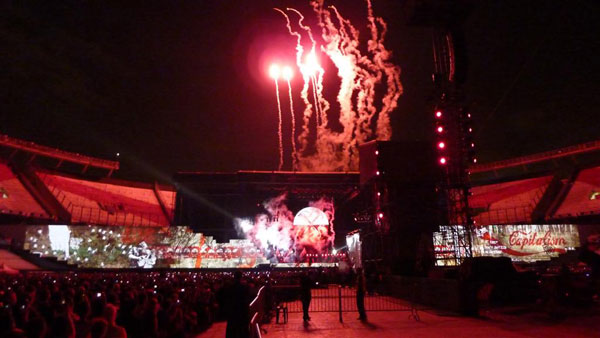 Just back from show number 8 in Buenos Aires.

We stood a little further back tonight. Since the shows started here, every night they have brought the pig down at the back of the venue and let the crowd in to tear it apart! Tonight was no different and for the last few shows Kami (Simon’s girlfriend-Ed.) has been making it known to me several times a day that she would really like to go and help tear the pig up! So we decided tonight was the night! 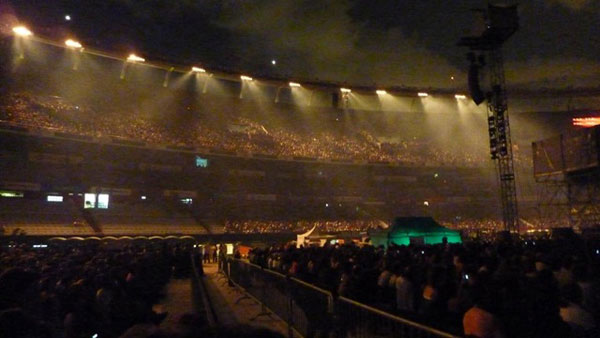 Stadium lit up with lights for the cameras

We watched the first half of the show from the rear on the floor and then for the second half moved up just to the left of the area where the pig is brought down!

They have the pig on 2 lines walked around by two guys. It comes out at the beginning of In The Flesh pt2 and is walked around the front of the stadium. It is then taken and hovered over the crowd during Run Like Hell, Waiting For The Worms and The Trial. As the wall is falling down they release the pig and let it hover just above the crowd so they can reach it, as soon as the crowd on the right start to pull it to the ground they let people run in from the left and the pig is totally torn apart in seconds!! 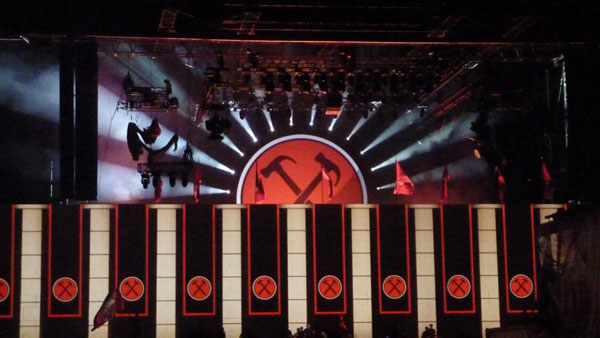 At intermission i had found a small sharp piece of stick on the floor and gave it to Kami to pierce the pig! As it happened this didn’t work and it broke right away. I followed Kami as she ran over once the pig was on the ground and took video of her, well at least i tried, at one point she totally disappeared and was nearly dragged under the pig! As she was scrambling around playing tug of war with other people who had the opposite end to what she had i saw a guy in the audience had got one of the tusks and it was still inflated, he was waving it around showing his prize to the rest of the crowd. I had already got a couple of pieces and went to help Kami, she was in a tug of war match still and i just ripped what i could and started biting a tear in the rubber which made it rip pretty easy! once id done that a couple of times the piece that Kami had in her hand was all hers! We quickly rolled it up and headed on out from the rampage!

It was a great show tonight but for the above reason, the view we had wasn’t the best but that was kind of our choice and due to what we wanted to happen with the pig. Sound was incredible where we were though and I’ve never heard the surround as good as i did tonight!.

ANOTHER BRICK IN THE WALL I y II - THE HAPPIEST DA