Roger Waters’ magnum opus of angsty anthems for adolescents of all ages was brought to jaw-dropping life at Vector Arena last night.

Not so much a concert as an artful two-hour audiovisual assault on the senses, it surely allayed Pink Floyd purists’ fears it would be a pale imitation without the original group to put it across.

True, it took a vocalist and three guitarists to make up for Dave Gilmour’s absence, but if you closed your eyes you would have been hard put to pick the difference between Pink Floyd and the tight performance by Waters and his 12-strong band.

Then again, closing their eyes was the last thing anyone in attendance would want to be doing, with the sheer spectacle of the piece at least half the point of proceedings.

While the 73m wide and 10m high wall constructed on stage during the show is much the same as the one built for the 1980 live version – as are elements like the Gerald Scarfe designs – during the intervening three decades technology, especially precision projection equipment, has caught up with Waters’ bombastic vision to eye-popping effect.

As a result, it was an extraordinarily enjoyable evening, in spite of the generally gloomy subject matter. And the exquisitely ironic sight of members of the crowd at Vector Arena singing with abandon to songs originally inspired by Waters’ sense of alienation from arena audiences only made the experience more entertaining.

The show was a stunner.

You don’t often pay good money to not see a musician play. But that was exactly what punters were asked to do just to catch a fleeting glimpse of Pink Floyd’s Roger Waters at Auckland’s Vector Arena last night.

You can blame the man’s 1979 double concept album The Wall for the situation. In 1980 Waters and his Pink Floyd band-mates were effectively torn apart by staging what was a ground-breaking live monster inspired by some less-than-ideal audience behaviour, but 32 years on (almost to the day according to the man himself) the now 68-year-old Waters is revisiting an old friend, only this time it’s just him and it’s bigger than ever.

Not only was it a full run-through of the album, but, as the name suggests, there was a wall. A really, really big one. Using close to 500 bricks and clocking in at 70m-long, the barrier between band and audience was constructed throughout the show, right up to the point one couldn’t see the other.

But the music was still there.

Sure, there wasn’t even a mention of his former band mates. Sure, Waters’ voice has obviously faded over the years. Sure, he spent a lot of time punching the air and miming actions to the words being sung by some guy we were never really introduced to – yes it was slightly like watching interpretive dance occasionally – but it was still The Wall.

The fans – and I think that term might be underplaying the admiration these people have for Waters and the music – were on their feet as we revisited the songs that are embedded in our collective consciousness; songs like Comfortably Numb, Run Like Hell, Is There Anybody Out There and of course, Another Brick in the Wall (Part 2).

But this reincarnation of The Wall is about more than the music. When the band disappears, the magic happens.

Waters has spent millions on making sure this is one of the flashiest productions out there – in the first five minutes alone there were pyrotechnics, plane crashes, machine gun fire and the feeling of being hunted by helicopters.

Then there was the wall itself. Built simply by cardboard boxes, before, during and after it’s full construction, it becomes the blank canvas for some incredibly impressive projections that take the audience everywhere from the skies above WWII to the bedroom of a rather under-dressed young lady.

And all that doesn’t even cover the 10m-high inflatable puppets, remote-controlled flying pig and full-on military uniforms and props.

Before the show kicked off there were grumblings from some audience members who were already blocked by the partially-built barrier. God knows what they thought they had got themselves into by the time the thing was finished.

But you have to bare in mind, The Wall is a sensory overload and more like a theatrical production than your average rock concert. It’s less about seeing the music being made, and more about experiencing that creative vision Waters had all those years ago.

When the wall finally came down and Rogers was saying his thank-yous and goodbyes, he mentioned how when he was “young and grumpy” he had trouble being in front of a crowd, now apparently, that has all changed.

Although, let’s be honest Rog, you are still behind that wall a hell of a long time but it was kind of amazing.

Along with 12,000-or-so other people, I spent last night watching a 10m high brick wall being built – and it was quite a spectacle. No, this was no Grand Designs live on stage type show. This was the building of The Wall. Pink Floyd’s Wall. Or more correctly The Wall built by the British prog’ rock band’s singer, bass player and songwriter, Roger Waters.

It’s funny how the most popular show at Vector Arena this year – though Gaga might come close and Coldplay could possibly take the honours later in the year – was originally inspired by a bunch of repellant Pink Floyd fans.

Not that there were any of those types at the first of four Auckland performances of Waters’ The Wall Live, with the three remaining concerts this week also sold out.

However, the story goes, that Waters came up with the idea for the double-album and rock opera out of frustration at some loathsome fans he came across at a concert in 1977. Not only did he start writing songs about alienation and disillusionment, both key themes of the resulting 1979 album, but he envisaged a stage show where a wall was built between the audience and the band.

Not that the fans minded being shunned in the name of Waters’ art. Because The Wall became a landmark album in Pink Floyd’s vast canon of releases – and now, more than 30 years on, this stage show is one of the world’s highest grossing concert tours.
And you can see why. Though key Pink Floyd members David Gilmour and Nick Mason are missing, 68-year-old Waters and his band, conjure up a sonic pallet of tension, drama and over-the-top pomp during the two hour performance.

Some of the music sounds vey much of it’s time, with the prog’-disco clap-a-long of Run Like Hell showing its age, but you can hear the impact these songs have had on future generations. For example, the raunchy glam rock of Young Lust, with its catch cry “I need a dirty woman”, reveals the influence bands such as Guns N’ Roses and Motley Crue took from Pink Floyd.

The majestic beauty of Comfortably Numb still gets your heart pumping and got the crowd off their feet and singing, and the staunch anthemic groove and chant of Another Brick In the Wall Pt 2, with a troupe of local kids taking centre stage to emulate the school children of the album and The Wall film, was a highlight.

The second half of the show takes an even darker and more twisted turn, with Waters becoming more unhinged, gunning areas of the crowd down with a machine gun during In the Flesh, and it went all bombastic and Broadway during The Trial with its chant of “tear down the wall”.

The real spectacle though was the building of the wall – with 242 bricks put in place during the first half of the show making a total of 424. Then there were the array of visuals (from those ever-menacing marching hammers to faces of people killed during war), the 10m tall string puppets dangling from the ceiling (including the cranky “Teacher” with his cane at the ready), and the opening pyrotechnics set the arena on fire (not literally).

The 2012 version of The Wall focusses more on anti-war messages and confronting poverty than self-loathing and alienation, because as Waters himself said, back then he was “poor miserable little f***** up Roger”.

Times have changed. These days the world is different and so is “young and grumpy” Roger. Back in the day he despised playing large scale venues like this – but now he’s loving it, and in top form too. 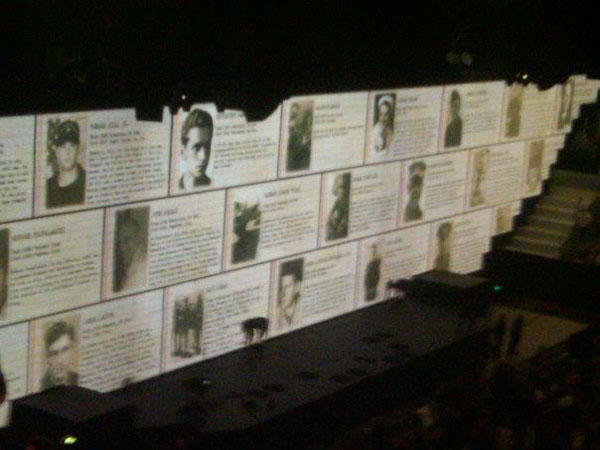