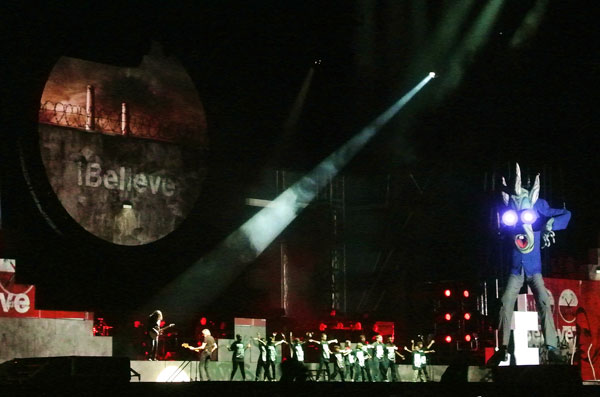 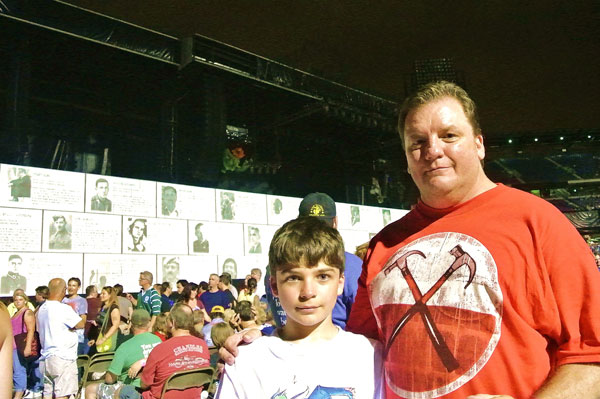 All above images thanks to Bob Juckett. Bob is pictured above with his son Matt.
Matt has seen a number of Wall shows with his Dad and we featured him in 2010 HERE 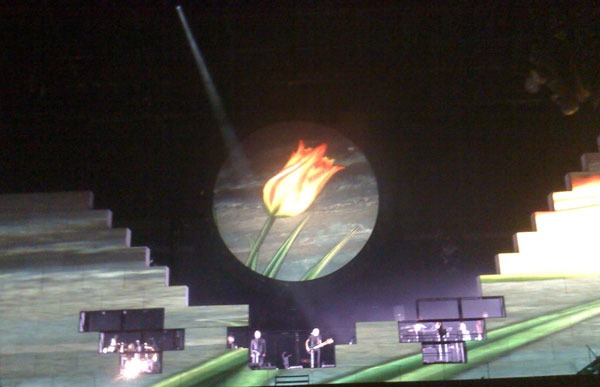 Given the efficiency with which commercial success trumps contradiction, it was perhaps inevitable that Pink Floyd’s The Wall, an album inspired by Roger Waters’ distaste for stadium shows, would find its way back into ballparks, more than three decades after its initial release. 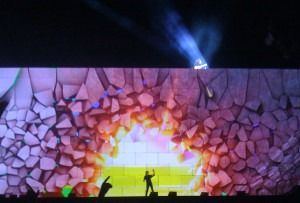 At Citizens Bank Park on Saturday night, Waters and his 11-piece band were dwarfed by a 40-foot-high “brick” wall that spanned the breadth of the field. As the ensemble played through the album in its entirety, stagehands filled in the gap in the center, oversize imitation brick by oversize imitation brick, until, at the two-hour show’s midpoint, Waters and his ensemble were entirely hidden from view. But even when there was nothing to see but an unbroken faux-marble expanse, the capacity crowd remained on its feet, in thrall to one of the most elaborate concert spectacles ever staged.

Although Waters remains on chilly terms with his former Pink Floyd bandmates, his band treated the original album as gospel — or, as he’s put it in interviews, like “a classical piece” — reproducing it note for note. Robbie Wyckoff handled David Gilmour’s vocals, a fluid counterpoint to Waters’ strangled scream, while guitarist Dave Kilminster handled the solo on “Comfortably Numb,” a flawless if slightly lifeless recreation. During “Mother,” Waters sang a duet with his younger, more tortured self, keeping time with a live performance recorded in 1980.

The accompanying visuals, projected across the wall’s ever-expanding surface, were dazzling in their precision and scope; as each piece of the wall slotted into place, a new chunk of the image faded into view. The Wall’s protagonist, Pink, is an alienated rock star who insulates himself from the world with drugs and casual sex, but the new staging strains to resonate on a geopolitical scale. During “Another Brick in the Wall, Part 1,” where Pink deals with his father’s combat death in World War II — recreated by a scaled-down Stuka that dive-bombed from the back of the stadium and hit the stage in a shower of sparks — the bricks were filled, checkerboard style, with images of other casualties of war, from Vietnam vets to Iranian political activists to Wehrmacht officers.

Given that The Wall eventually draws a pointed analogy between rock excess and Fascist spectacle, the sprawling, thoroughly immodest production was awash in unintended irony. “In the Flesh” staged a rock concert as Nazi rally, climaxing with Waters machine-gunning the crowd, who heartily cheered their own mock execution. During “Bring the Boys Back Home,” the stage behind Waters flooded with images of poverty and famine, climaxing with a photo of what looked like a starving African child; the image was disturbing but also deracinated, torn from its specific time and place to make a statement so broad it verged on generic. Onscreen quotes referenced Kafka and George Orwell, but there was something disconcerting, even grotesque, about the obeisance Waters’ own spectacle demanded. With its enveloping surround sound, The Wall made surrender seductive, not the natural endpoint for an evening that began with a speech from Spartacus.
Review thanks to Sam Adams (Thanks to Shawn Libby for the heads up)

Above pictures Thanks to Coleen Stern 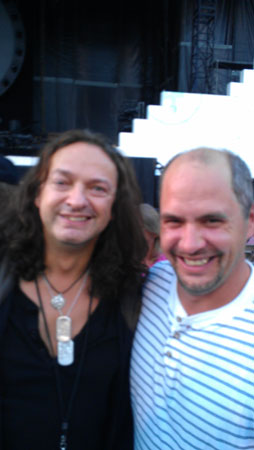 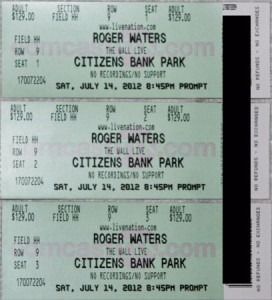