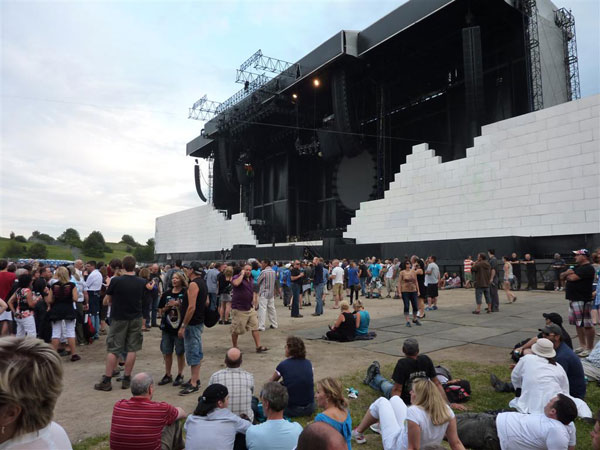 Above material thanks to Simon Wimpenny

I have seen Roger perform 10 times, and this was the 4th time seeing The Wall. Of all his performances this one was just not up to his level of musical performance. Mind you, for another artist they would have been happy to have a show like this one. But it was not as tight as Waters shows usually are. Many small miscues of timing throughout the show, several times you could see Roger was not happy with the glitches.

Also, the only differences in this show were added homemade signs on each end to make it longer, and more flash at the beginning because it was outside and you can. Otherwise, no different than the other performances on this tour. This was billed to be unlike anything that had been done before, those are Rogers’ own words.

Add to that the organizers in Quebec were terrible. It felt like I was at a show organized by kids. Completely insufficient staff and facilities. We went in early to get a spot in the Front Stage section, thought we would support the event and buy our food inside as we were told there would be concessions. NOPE, one hot dog stand for the more than 9000 people in the front section, we asked event staff they confirmed it was the only spot, and of course we were not allowed back out to get something to eat and re-enter.

I wanted a souvenir t-shirt, one stand selling to all 75000 people at the show, staffed by 4 people, again asked the event staff. 6 porta potty toilets for the more than 9000 people in my section, so men and women were just urinating basically everywhere. We did not have a beer because we did not want to add to the problem. Same thing in General Admission, extremely limited access to toilets and people going everywhere.

The fields were huge yet they set up to use only a small portion of it. MANY people were forced to watch from behind trees and tents and they could barely see any of the wall. The fields could have been used much better, simply setting up the stage further back would have given people more room to spread out and not be stuck behind something.

And finally some of the most drunk and aggressive people I have ever seen at a Waters show. Pushing, elbowing, ignoring the show and just yelling nonsense while getting wasted. Far too many stumbling drunks. falling and passing out.

All in all it was one of my worst ever concert experiences bar none, and certainly the worst Waters show I have ever seen.

I was there and got a blast!!! WOW This was my 17th Wall Live show or so (2010 and 2012) and this one is the best show i saw ever. The sound was f$#@ing good, the band was top notch, the visuals were insane. Sorry cannot find the words to explain that experience …. THANK YOU ROGER!!!

Of course this show was outdoor and crowded so i can understand the organization was not very good and not many hotdog stands. But hey i was there to see the show not to eat hotdogs. You better eat before going to the venue there were plenty of restaurants near the venue.

And one more time THANK YOU ROGER!

I have seen the show countless times stemming back to 2010 and agree with shine_on, an amazing show in Quebec. For the dude complaining, what do you expect for an outdoor show with 100,000 people. The people hanging out where I was in the red front stage zone area where very cool and everyone was totally into the show. For an added kicker, about 10 feet away from me during Young Lust some chick decided she was not going to be outdone by the naked blonde portrayed on the Wall. She jumped on her boyfriend’s shoulders and ripped her shirt off dancing like crazy on his shoulders! I couldn’t decide which naked visual to watch! There were also beer guys working there way through the packed crowd with very cold Molson’s all night long. My only complaint was leaving as there was only 1 exit for the front stage zone section so it took almost an hour to get out.

The atmoshere and environment in Quebec was totally amazing. The pix posted by Ron above off the lights was just awesome to see. Roger spoke almost entirely in French all night so you could never understand him but at the end of the show I asked the people around me what his final words were and he apparently said playing here in Quebec at this location will be a night he will always remember. The ovation at the end seemed to also go on forever. The crowd starting singing something in french and the band joined in for a short verse. So glad I made the trip up, truly a night to remember.

I think we can safely say that 99.9% of people’s reactions would have been as above. Some people just enjoy being uniquely negative in the midst of an overwhelmingly positive vibe.

It was, to all intents and purposes a festival style location with a festival size crowd, so you will have to queue for overpriced food and you will be confronted by people off there heads on booze and all manner of other stuff. Not quite sure what some people expect to be honest.

As for the differences -- well four times the Pyro, an 800 foot long Wall, the Stuka flying a huge length over the park and the insane spotlights -- well I would say that is a fair few differences. I am sure there were a few others as well but these are the obvious ones I picked up on from Roger’s interview and grainy YouTube footage. Again, not sure what more people want or expect.

I went having seen a cheapish flight to toronto. but this meant a 3 hour drive to gatwick, 7.5 hour flight to toronto and then a 6.5 hour megabus ride to montreal, where i stayed with my friend diane and then a 2 hour drive to quebec. With all the check ins and connections around 28 hours of travelling. So was it worth it? Answer is a resounding yes. Had a great time in montreal its a vibrant lively city, went to the big O olympic stadium and then had the most amazing smoked meat at swartz deli. Now to the gig, I think it was the greatest show ive been to bar the 20min at live8. Why? Quebec is one of the most beautiful cities ive been to, the plains de abraham made a beautiful venue, great bowl shape with a hill, and the wall itself was mega. not just the length of it but the amazing images and drawing on the curved extended bits. The sound was PRESTINE and perfectly mixed, and i was central 2/3rd’s back and never heard the quad sound so good maybe i was in the sweet spot.

The band was tight, crowd excited but respectful and the lights that shone above the stage looked amazing. Just an alround vibe that this was a slighly different and special gig. For those interested in the indoor outdoor debate.. I do as a general rule think this show works better in doors with its intimacy, greater comfort and fewer obstructions. There are lots of projection and lighting towers that can obscure things a bit for some of the audience and a few synching issues however as i say this show felt special and was special. I didnt see any of the shows in football or baseball stadiums so probably not qualified to comment but if i had to see it outdoors i would rather see it at a special place or venue like this one. I had a quick chat with simon at turf bar before the gig which was amusing because he hadnt been expecting me and he was with an entourage of beautiful girls. I left bar early as was in general admission, but was good to see Si who’s blog encouraged me to see the outdoor show as he said it was on another level. Have to say i was very skeptical about seeing a show about the alienation of doing large shows at a large show but this one was truly unreal. Anyway I am knacked and broke again but it was worth seeing the master at work.

Review thanks to multilateralism 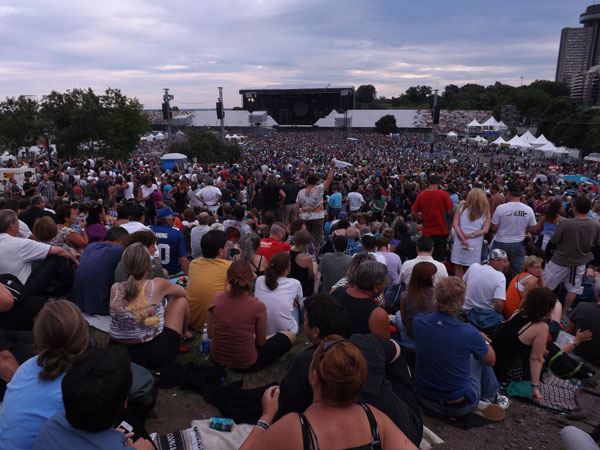 This was the 4th time I have seen The Wall show, and except for a couple of new surprises, I pretty much know the show. but the crowd experience, it was something totally new. Three hours in line, another three hours to get everybody in, and then it started.

Above comments, video & pictures thanks to Nelson (bushnocchio) 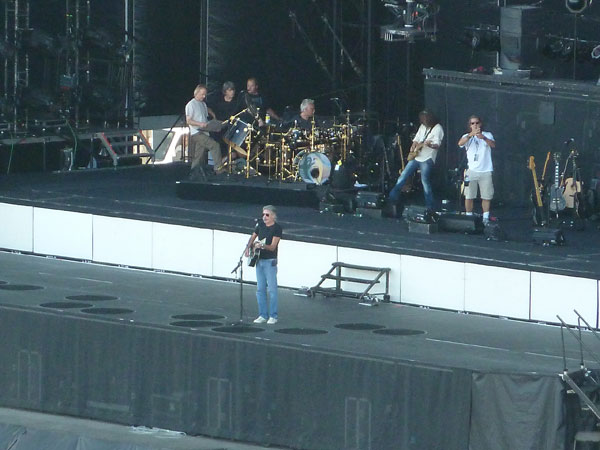 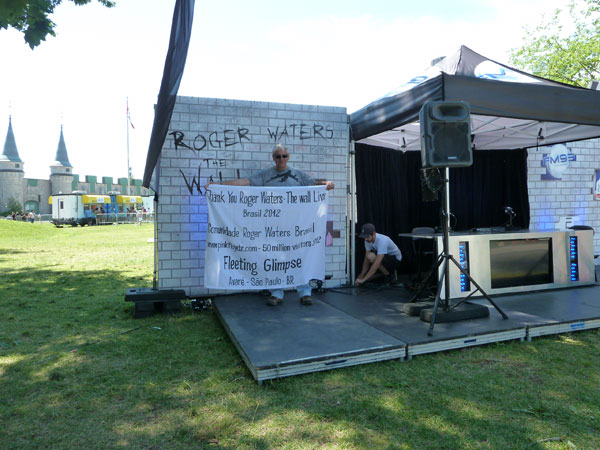 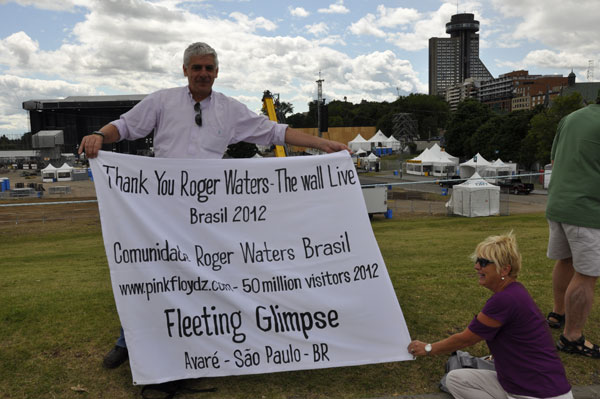 Our dear friend Joaquim Arnês from Brazil sent in the above set of pictures. Joaquim has flown the AFG banner at a multitude of Wall shows across the world. 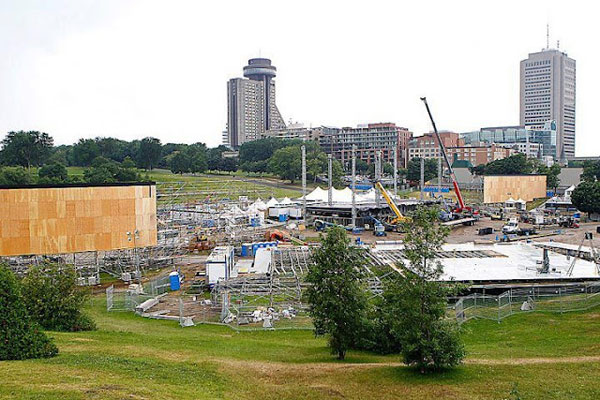 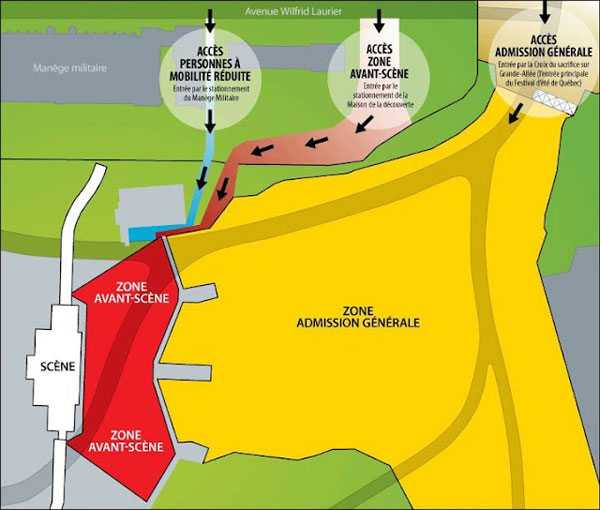 Above 2 pictures thanks to Simon Wimpenny 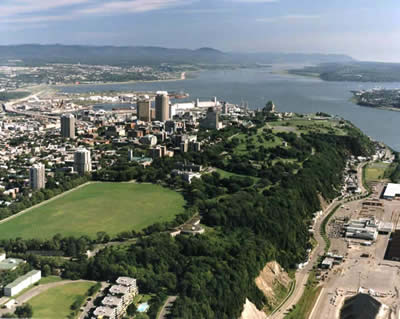 This will be an outdoor show on the historic Plains of Abraham.(where the English and French fought in 1759). Capacity is expected to be the largest of the tour, (Metallica managed to pack in 110,000 at a concert there in 2011 which is the maximum allowed). Full details of this special concert event were announced at a Press Conference in Quebec City on Tuesday 22nd May.