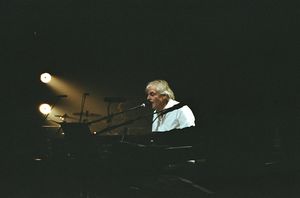 I just got back from night two in Los Angeles at the Gibson Amphitheater, and my head is spinning. David and the band were ON FIRE! My less than stellar experiences with the Kodak Theater were completely redeemed by my experience at the Gibson. I was approximately 15 rows from the back, just left of center (LOG 11, row M). Perfect view of the stage from anywhere in the house by the looks of things.

This time, no ear protection was necessary and the sound was absolutely stunning! Everything was crystal clear and David’s guitar cut right through to your soul.

As with the last few shows, David warmed up the crowd with Breathe / Time / Breathe Reprise. The guitar solo in Time was a preview of what was to come, as it was full of energy and he just started to let loose! The crowd jumped to their feet, where many would remain for most of the night. Next up was Castellorizon into On an Island (with Crosby & Nash again of course!), followed by pretty much the same order as the night before. It’s incredible to see David jump over to the Saxophone for Red Sky and then go right back to blowing us away on of his guitars. Take a Breath was really rocking and got the crowd really going again. Pocketful of Stones was beautiful as the sound really was fantastic at the Gibson.

On to part two and the red strat comes out for Shine On with Crosby & Nash. Once again a stunning rendition of a beautiful song, with Dick Parry tearing it up with multiple Saxophones. I really liked on both nights how he skillfully flings the baritone sax aside to pick up the tenor.

Next up if my memory serves me correctly was a lovely rendition of Wots… The Deal. This stumped many in the crowd but I was singing along quietly 🙂

The white Telecaster came out for Arnold Layne again, followed by a mind-blowing Fat Old Sun. David and the band really tore this one up. Incredible. Next up like the night before were Coming Back to Life and High Hopes, which David attacked with equal energy. He missed the first note or two of the slide solo because he forgot to flip a pedal switch on the Cornish board, but he gracefully dove in at the right place.

And then…… Over the deafening roar of the audience a single note from Rick and we all know what’s coming (Echoes). The crowd erupted in a fury of excitement and we all witnessed David and Rick’s stunning performance. As I said at the beginning: the band was ON FIRE tonight! When it was over, I picked my jaw up from the floor and stared blankly at the stage in disbelief! Unbelievable!

What a difference it makes to actually see what’s going on and hear it without security talking loudly and evicting the same guy for the 5th time (are you reading this Kodak Theater?)

Wish You Were Here began the encore, I think as from the night before. David’s energy showed no signs of winding down here. Next up was the a cappella rendition of Find the Cost of Freedom with an explosion of applause and screaming from the audience as Crosby and Nash left the stage.

And finally of course Comfortably Numb. During the bridge solo the green laser fanned out to cover the edge of the balcony all across the amphitheater. It looked really neat below it, and must have looked really interesting from up in the balcony. Very cool.

David finished us all off with an incredible rendition of Comfortably Numb. I’m still in disbelief at how great a show it was. It was the single best concert experience I’ve had, out of about 30 shows of various bands. This one takes the cake. David I hope to see you again.

FIRST HALF: Breathe/Time/Breathe Reprise, Castellorizon, On An Island (w/Crosby & Nash), The Blue, Red Sky At Night, This Heaven, Then I Close My Eyes, Smile, Take A Breath, A Pocketful Of Stones, Where We Start.

ENCORE: Wish You Were Here, Find The Cost Of Freedom (w/Crosby & Nash – one of their songs), Comfortably Numb.