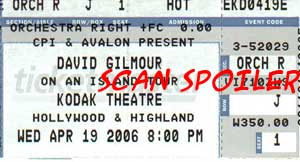 Thanks to Erick Shultz

They had pro cameras setup at the sound board and around the theater and it appeared that they were filming for a DVD or archives.. 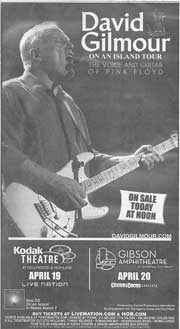 The entire ‘On an Island’ album

1. Shine on you crazy Diamond with Crosby and Stills on backup vocals
2. Fat old Sun (extended jam)
3. Wearing the Inside Out
4. Arnold Layne (Gilmours statement to the crowd “We have recently started to play this song so we might mess it up, We reached way back for this one” They didn’t mess it up at all)
5. Coming Back to Life
6. High hopes
7. Echoes

Thanks to Erick Shultz