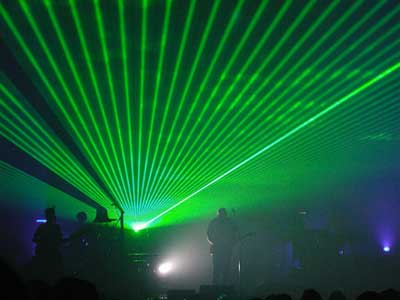 Fully enjoyed night 2 at the Rosemont Theater. I don’t know if it was because I had a different location or not but I think the second night was better than the first. Over all, David sounded much better vocally, much stronger and the music was right on, a flawless performance. It was like they were “in the zone”. The audience was much more behaved but still very appreciative. Even at points where the music faded out slowly, The audience would clap and then stop when they realize the song wasn’t yet over, and then they waited until it was, not to make that mistake again. It was wonderful.

The sound of the band was very well defined and very impressive. Each instrument came through very clearly without drowning each other out. I must say that Rick sounded fantastic and made a great presence in the band. Especially during “Echoes”, Rick’s element and contribution was outstanding. When David and Rick switched off musically during Echoes”, it had the same sonic impact as it does on studio version. Each member acted and sounded like they have been playing together for many years. 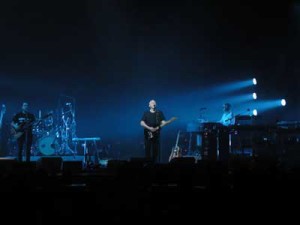 David’s selection of songs for this tour were a very good choice in my opinion. I’m glad he is playing all the songs from “On An Island”. Some of the songs needed to be played live for better definition where as others are just really good songs. All were great to hear live.

“Shine On” has been renewed with a fresh new sound and it was very refreshing. “Wots…Uh The Deal”, “Dominoes”, “Fat Old Sun” and “Echoes” fit great into the set list and makes me wonder why he never used these on earlier tours. I know “Echoes” was dropped early from the MLOR tour.

“Coming Back to Life”, “Breathe/Time/Breathe (Reprise)”, “High Hopes”, “Wish You Were Here” and “Comfortably Numb” sound great in the intimate settings of this small theater and “Wearing The Inside Out” lets Rick shine and he shines like anew. I am glad he swapped out songs like “Money” and “Another Brick In The Wall, Pt. 2” for these songs. It’s not that I don’t like them, I just think they get over played. And I think it because of these elements that makes this show work so well.

I hope we don’t have to wait another decade or so to see another tour by David and/or Floyd, although it seems the latter to be less likely to happen at all. I enjoyed these shows greatly. 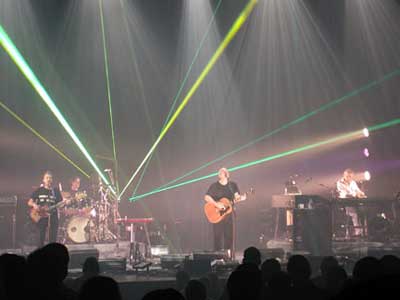 FIRST HALF: Castellorizon, On An Island, The Blue, Red Sky At Night, This Heaven, Then I Close My Eyes, Smile, Take A Breath, A Pocketful Of Stones, Where We Start.

SECOND HALF: Shine On You Crazy Diamond, Wot’s… The Deal, Dominoes, Coming Back To Life, Breathe/Time/Breathe Reprise, High Hopes, Echoes.

Thanks to Adam Ooten