The Animals concert at Olympic Stadium in Montreal is seen as the catalyst for The Wall album and shows. Roger Waters spitting in the face of a crazed fan climbing up the storm netting is arguably one of the most significant moments in the history of Pink Floyd. While not wanting to detract in any way from what the band produced as a result of that incident, I’m here to tell you the whole thing was actually one terrible misunderstanding.

I was backstage, the band having just begun playing. For a brief moment Roger turned in my direction and I noticed that his fly was undone! I made several attempts to attract his attention, but once he’d turned his back to me again it was impossible. I knew I had to get around to the front of the stage and signal to him from there.

So I pushed and shoved my way through the fanatical fans at the front and tried to catch Roger’s eye. It didn’t take long for me to realise that this was a lost cause. Everyone was waving their arms about and shouting. How in the hell was Roger supposed to spot a guy gesturing to his trousers, and saying, “Pssssttt, Rog. Your FLY!”?

By this time a rather tanked-up guy next to me asked what my problem was, and when I told him Roger’s fly was down he said, “Oh no. Man, he’ll be so cheesed! We’ve got to tell him somehow.” He looked up at the storm netting and said he could give me a leg-up onto it and I could climb right up to the stage. I told him I couldn’t because I had a terrible back, and when I climb it hurts me. So I suggested a few of us could lift him up instead.

He was pretty apprehensive, but with alcohol severely affecting his judgment, and several similarly inebriated mates egging him on, he decided to go for it.

As soon as he was lifted onto the netting I knew things were going to get ugly. Security guards raced towards him, forcing him to rush the climb. The stuff was difficult enough to negotiate as it was, but combine that with alcohol and panic, and you end up with a guy who climbs like he’s been shot with a dozen idiot darts. 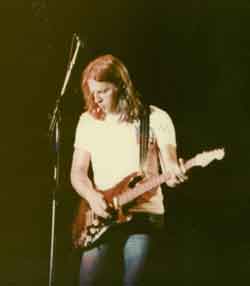 With a bit of help from the crowd he managed to escape the grasp of the security guards, and made his way awkwardly towards Roger. As he neared the stage he called out, “Roger, ROGER!!! Man, your zipper! Your ZIIIIPPERRR!!!!”

Roger, who by this point was well and truly fed up with the crowd’s raucus behaviour, saw the raving and drooling moron coming towards him. Unaware of what the young guy was trying to tell him, Roger instead started calling back to him. In a tone much like you’d use to cajole a wayward puppy dog, he lured the drunk closer and closer. Then the moment he was within range he spat a big, thick hucker right into this poor loser’s face.

This sent the drunk reeling, and he stumbled, tumbled, lurched and toppled back down into the crowd. As he got to his feet one of his friends saw the slag on his face and yelled, “Man, if I were you I’d never wash my face again!” That view wasn’t shared by the recipient of the phlegm, who rather messily wiped it off his face with his sleeve.

Fearlessly the idiot faced the crowd, looking for “yours truly”. As soon as he spotted me, he lunged and took a huge swing in my direction. Instinctively I ducked ( all the punch-avoidance tricks I’d learnt during my Soltan Battery days came flooding back ) and the blow landed squarely on the jaw of the Hell’s Angel standing behind me. Needless to say he was less than impressed, and returned the favour with a great deal of force.

Within seconds an all-in brawl was taking place. I managed to crawl between the legs of the punch-drunk drunks punching, and of those punching drunks, and as I got to my feet, flashed my backstage pass and made for the safety of my position behind the band. ( Ah, the bravery of being out of range.)

As Floyd finished playing Pigs Three Different Ones, Roger yelled out to the brawling idiots, “Stop fighting, you down the front here. Silly people. It’s very hard to play with you all beatin’ sh– out of each other.”

I was happy to get out of there alive, but I was happier that Roger didn’t know I’d been involved. At the end of the show he came off the stage and finally noticed his fly was undone. He said, “Shoyt!! Was my fly down through the whole show?” I shrugged my shoulders and said, “Dunno, Rog. Never noticed.”

Interestingly, as Dave passed by me he winked. To this day I’m not certain whether that meant he knew about Roger’s fly all along, and just didn’t say anything.