There was at least one occasion where Roger appreciated a bit of Albert Magoolie madness.

We were at a truck-stop/hamburger joint one night while Floyd were touring in the U.S.

All the guys except for myself and Nick had got their food and were sitting down eating. Nick stepped up to the counter and said “Can I have eggs, sausage, chips and beans, and a tea.” As usual I was last to order, still standing there trying to make sense of the menu. I mulled over it, beginning at the breakfast menu. …Flakes….Scrambled egg, Bacon, Sausages, Tomatoes….Toast, Coffee…

Suddenly this big, burly, smelly truck driver shoved past me, threw his hamburger onto the counter, and says to the young lady serving me, “This hamburger isn’t fit for a pig!”

Everyone looked over, and the whole place fell silent. A wisecrack popped into my head which I couldn’t resist, even though I knew I was taking my life in my hands. I put some money on the counter and said, “Don’t worry, mate. I’ll get you one that is!” 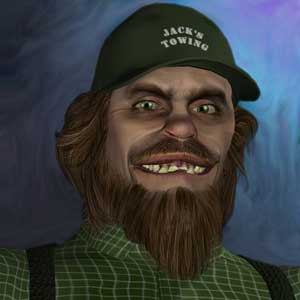 The silence was broken as laughter errupted. The big guy wheeled around in horror, seeing all the patrons laughing at him. I stood awaiting his fearsome response, but by the time he turned back to me he’d started laughing too. He grabbed me by the scruff of the neck and said “You’d be dead now if that wasn’t such a %*#$!^@ good line.”

I looked over to where the Floyd guys were sitting, but saw them all standing and clapping.

The establishment gave the truckie another burger, he bought me a coke, and I got my meal free.

Back at the table Roger shook his head and said, “You are a %*#$!^@ maniac, aren’t you? You think of some line and you just can’t stop yourself from saying it. Did it ever occur to you that that guy could’ve ripped your spine out through your nostrils?” I said, “Yeah. I was actually picturing my spine coming out of my nostrils as my words were coming out of my mouth.”

The truckie came over and sat himself down at our table. He turned out to be an incredibly interesting character. We sat for ages and listened to him telling a heap of truckin’ stories, including one about a hitchhiker throwing up in his rig.

It was clear that Roger developed quite a soft spot for truck-stops and hamburger joints that night.

As for the food; the hamburger I ended up with probably was fit for a pig!