During my years in the wilderness I received the occasional letter from Rick Wright. Being booted out of Floyd himself, I suppose he felt quite sympathetic to what happened to me. And I don’t know if it was out of a sense of guilt relating way back to the demise of Syd Barrett, but I had a feeling Rick wanted to ensure I didn’t crack up like Syd had. 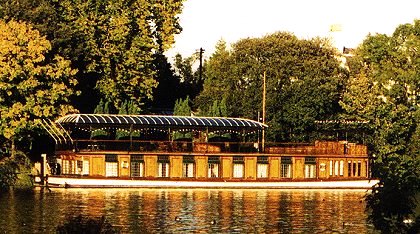 But in 1986 I was absolutely bowled over when I received a letter from David Gilmour, along with a plane ticket to England.

He and Nick Mason had begun work on a new Pink Floyd album on David’s houseboat studio “Astoria”. While they didn’t say as much, I soon discovered they were really struggling for ideas. Apparently they’d hired all sorts of people to help them come up with ideas for a concept album, or simply to get their creative juices flowing, but it all amounted to nothing. As it was, when I stepped onboard Astoria the first person I saw was Bob Ezrin.

They called on me because it had been decided that if anyone was to be brought in from outside to assist with creating a new Pink Floyd album, it needed to be someone with strong Pink Floyd links. I don’t know which of the three (Gilmour, Mason, Ezrin ) first suggested me, but there must have been a fair degree of belief among them that I could provide some kind of spark or inspiration. On the other hand, they simply might have thought they needed to be angry or frustrated to produce decent music, and no-one was more likely to cause them to feel that way than me! The welcome I received when I stepped aboard Astoria was warm but restrained. Hard to explain, really. Sort of like they wanted to hug me and punch me at the same time. We shook hands, but there was definitely a certain unease in the air. I felt like I needed to say something to ease the awkwardness, so I looked around the room and said, “So… where’s Roger?” After a few groans David replied “I don’t know. I expect he’s with his lawyers.” And as if to counter my wisecrack, he added “Oh and by the way, you’re going to have to pay for that plane ticket.” “Just put it on my account,” I replied, “That’s if there’s any room left!”

My next question I kept to myself for the moment. That was, “And where’s Rick?” But I had a feeling that question would be addressed before too long.

I was shown around the luxurious Astoria, had lunch and caught up with all the goss I’d missed out on during my Floydian exile. Then David asked if I wanted to hear what he’d been putting down. I agreed, of course, and followed him through to the recording room. I sat and listened to it all, but I have to say that what I heard was nothing like what I was hoping for.

David, Nick and Bob all looked at me, awaiting my opinion. I said, “Eet’s very beautiful, but eet’s too sad….. ” My Antonioni impersonation broke the ice, and gave the guys a chuckle, but they could sense my apprehension. Almost as if to make excuses for what I’d just listened to David mentioned that he’d had 10cc’s Eric Stewart helping out with some ideas. While I didn’t mind 10cc, I shook my head and said “A guy from 10CC working on a Pink Floyd album? I could’ve told you Dave, you won’t feel the benefit.”

I scratched my head, trying to conjure a way to say what I really thought without getting myself thrown overboard. “Look,” I said cautiously, “From what I’ve heard…..um…. Number One, don’t call it Pink Floyd. This is what you should do with it. Get Pete Townshend to write some crappy lyrics, get Dave Harris to lay down some crappy techno-funk, get Roger’s graphics friends to do some crappy cover artwork,…………..then go and kill yourself!”

There. I think I handled that fairly sensitively.

After some stunned silence Nick spoke. “So…. what you’re trying to say is…..?” Bob Ezrin leapt up and said, “What he’s trying to say is what we’ve known all along. This aint Floyd!”

Gimour rubbed his chin, cleared his throat and took a deep breath. ( We’d really hit a nerve here, and David was about to respond with a statement of some significance.) “Gentlemen,” he said thoughtfully, “I’ve got a new espresso machine. Who’s for coffee?”

Bob Ezrin and I looked forlornly at each other as David went off to the kitchen and made us each an espresso. When he returned we retired to the lounge area of the houseboat and, getting back to the issue at hand, he said “So Magoolie, have you got any ideas for a concept?” I gently blew the steam off my coffee and said “What do you mean ‘concept’?” David said “You know, an interesting theme that could run through the album.” I paused….. “What do you mean ‘interesting’?” Suddenly the room erupted in howls of frustration. David threw a cushion at me, while Nick threw his head back and moaned “Did we completely forget this guy’s bonkers?” “Bonkers?” Bob Ezrin protested, “This cat’s brilliant! See, already he’s got your emotions rising. And inspiration surging! Can’t you instantly feel ideas coming on for a song?” “Yeah,” David replied, “but unfortunately I’ve already done a song about murder!”

It was becoming very clear to me that David was too bogged down with his need for a theme. I said to the three chaps, “Forget the concept idea. At least for now. Just start playing some music in a Pink Floyd style and eventually something will start to develop. Some element of your thought processes, or even the environment you’re working in will begin to … I dunno …. impose itself in all the songs.” This brought nods of acknowledgment.

“Right now I’d have to say it’s as if you’re up the creek without a paddle! Nothing flows. It all sounds a bit wet. As weak as water. Look out the window. I reckon you should just chuck this new stuff in the river. As far as Pink Floyd goes, there seem to be no signs of life whatsoever!”

Suddenly Nick’s eyes lit up. “Of course!” he exclaimed. “I know what’s missing.” ( Eureka! I must have got through to him.) “There’s no sugar in this! Dave, you didn’t sugar this coffee, did you?” “Yes I did,” David said, “I must’ve given you Bob’s by mistake.” “Oh, here,” blustered Ezrin, “have mine! I haven’t touched it.” Then he looked over at me and said “I’m with you, Magoolie. You’re right on the ball.” Nick then turned to Bob and said, “It all sounds reasonable, Bob. But I’m not sure you’re thinking clearly.” “Why not?” asked Ezrin, to which Nick replied “It’s just that…….. I’m sure I saw you take a sip. I’d rather just go and make myself another one.”

Bob put his head in his hands, and Nick headed back to the kitchen. Once he was out of earshot David leaned forward and quietly said, “I agree with what you’re saying, Magoolie. But um, it’s extremely difficult to, as you put it, ‘play in a Pink Floyd style’ at the moment because Nick’s completely lost the ability to play. Or even the will to play. In fact that’s something I’ve been meaning to talk to you. about. Roger bagged Nick’s drumming so much that he’s given him some sort of drum-phobia. We can’t get him near a kit at the moment. So until he gets over this problem, you must try to avoid any reference to Roger, and whatever you do, never – EVER – mention of The Final Cut.” 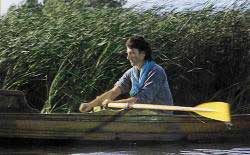 I slumped back on the couch. This was quite a pickle. Quite a predicament. Here I sat with the two remaining members of Pink Floyd, one with writer’s block, and the other with drum-phobia. The only positive was that at least I was starting to get some emotions to the surface.

Nick came back in with his fresh, sugared cup of coffee. The sun was setting, and through the windows of the houseboat it created a spectacular effect. The angle of the windows caused a reflection that seemed to create a double image. I pointed to the windows and said, “Look at that. There’s two suns in the sunset!”

“No! Not again!” David cried, as Bob dived across to take the spilling coffee cup from Nick’s hand. Suddenly it hit me that Two Suns In The Sunset was a song from The Final Cut. Worse still, it was the song that Roger Waters brought in Andy Newmark to play drums on because it was too tricky for Nick! Oh Magoolie ! You’ve done it again.