Never let it be said Roger Waters is predictable. After all the problems I’d caused him over the years, and in particular the fact that the last time our paths had crossed I’d seen him in a Santa suit swimming up the Thames, I never thought he’d ever ask me to work for him again. In fact, I thought I’d have more chance of finding identical snowflakes on a four-leafed clover! Yet in 1990 I found myself among Roger’s entourage helping to set up for the Potsdamer Platz presentation of The Wall.

I don’t think I was brought in because of my vast experience and expertise with the construction of the wall. ……Umm…. Yeah….. I can be pretty sure that wasn’t why I was there. Maybe it was because Roger acknowledged the positive effect I’d had on the Momentary Lapse Of Reason album? Then again, maybe all he really wanted me for was to design the Memorial Fund For Disaster Relief sign which was projected onto the circular screen at the end of the show? Whatever. I got invited, that was the main thing.

The production itself went under the working title of Roger’s Psychedelic Brickfest. It was an awesome undertaking. Amid the preparations was an extraordinary sense of anticipation, mixed with terror. Besides the huge crowd expected at the venue, there would be TV audience in the multi-millions, so there was no allowance whatsoever for stuffups.

Roger spent his whole time pacing around checking on the progress of every part of the operation, ensuring that no detail, however small, was overlooked.

You rarely saw him without his headphones on. I began to wonder if by the time it was all over he’d need to have them surgically removed. Everyone assumed he was listening to The Wall over and over, getting all the sequences right, picturing the players and the props, checking where they’d need to stand at what moment. It certainly was a massive undertaking, and on a massive scale. There was just so many things that could go wrong. It was a good thing I was there!

On the musical side, one thrill for me was catching up with Snowy White again. I greeted him with a hearty handshake and belated congratulations on his album White Flames, and single, Bird Of Paradise. I had the album with me, so I got him to sign it, along with an old Peter Green album. He was chuffed, particularly about the Green album. He said “That’s amazing, Magoolie. I’ve signed one Peter Green album in Japan, one in Australia, and now one in Berlin!”

I also relished the opportunity to meet Graham Broad. We got to have a bit of a bash together on the drums, swap some ideas and learn a few of each other’s tricks. I showed him a heap of stuff, which he really seemed to appreciate, despite saying it was rubbish, and he’d only it play if he had both hands amputated and his feet screwed to the back of his head. Ah, drummers. Aren’t we a bunch of mischievous little tricksters!

Somewhat less of a thrill was getting to meet Sinead O’Connor. I was fortunate in that she didn’t remember me from the time she unsuccessfully auditioned aboard David Gilmour’s houseboat. Otherwise she might have been even more unpleasant than she already was.

Despite all the excitement and expectation that was buzzing around the concert venue, all she wanted to do was whinge, moan and complain. Roger thought she was being painful because I kept telling her to get a haircut, but most of her carryon was over what she described as the lack of young performers on the bill. She felt out of place among the older, more seasoned professionals with whom she was now forced to rub shoulders. Out of her depth might have been more to the point. I suppose it was out of a perverse politeness that I tried to humour her, suggesting that Roger could bring in some young, black, streetwise rap artist – wid a bad additood and a cap on back to front – to do some kinda snoop-doggy-ice-T-aggro version of a Wall song. Only jovially, of course. I mean, who could possibly take a suggestion like that seriously? She did!

I couldn’t believe my eyes when I saw her bowl up to Roger and hit him with the idea! Roger immediately glared in my direction – with an accusing “You put ‘er up to this, didn’ ya!” kind of look.

I shook my head and shrugged my shoulders, then watched as Sinead put a cap on her head backwards and started rapping Bring Da Boyz Back Home. Roger just stood there. He had this look on his face…. It was the kind of look you’d have if the Pope rode up to you on a tricycle and slapped you in the face with a rubber chicken!

Despite being a safe distance away, I braced myself for Roger’s withering counter-attack. There were so many reasons why this idea was stoooopid. Silly, sad, sorry Sinead. She’d doused herself with petrol, rolled herself in gunpowder, strapped herself to a mountain of TNT, and handed Roger a match.

But there was no “boom!” I don’t know whether Roger’s tongue seized up due to the flood of nasty retorts rushing in, causing a sudden log-jam in his brain, or whether he was simply making his best effort to hold things together. But he calmly and politely thanked Sinead for her suggestion. Unfortunately though, he said, it was a bit late in proceedings to go changing things now. That took every ounce of restraint he could muster ( which for Roger isn’t that much ), and as Sinead smugly strutted away, content in the knowledge she’d just told a rock legend how things should be done, he must have yearned to deliver at least one, just one spiteful parting shot.

I stood there, as amused as Roger was bemused. If Sinead only knew how close she’d come to death by verbal caning. I’d endured that many a time. Roger’s tirades could make you feel like an iceblock under a blowtorch. How easily he could have, with no weapon other than his articulate and devastating command of the English language, clouted – no, bludgeoned – this little ingrate into shape.

While this bizarre episode provided Roger with a rare moment of levity, however unintentional, it was really the last thing he needed. For him things were extremely tense and uneasy. I put this down to the stress he was under with the concert preparations. But I certainly didn’t make things any easier referring to him as Santa. After letting it slip a couple of times, Roger turned to me and, through gritted teeth said “Utupshay about Antasay Ausclay OK!”

An unexpected surprise awaited me in Berlin. I contacted my sister who lives in the UK, and told her where I was and what I was doing. As it happened, her husband had some business in Berlin the following day. She was coming with him, and so took the opportunity to catch up with me and have a look at the concert venue.

When my sister arrived at the site she was immediately struck by the scale of the thing. It really was quite breathtaking. But the thing that caught her attention most of all were the bricks themselves. They were a cleverly designed collapsible cardboard box with a polystyrene face. She said “Albert, we’re shifting house in two days. Do you think Roger would let us borrow some of these boxes? You can never seem to have enough cardboard boxes when you’re moving.”

I couldn’t see why not. Man, there were hundreds of the things! Stack after stack, piled high. Surely he’d be able to spare a few. But I didn’t want to make any wrong decisions, so I tracked Roger down and asked him in person. He had those damned headphones on, so I had to speak very loudly and clearly. He was nodding his head as I was speaking, so I took it that he didn’t have a problem. Though in retrospect I can’t really recall whether he was actually paying any attention, as he also had his damned sunglasses on at the time. As I was to discover later, he never heard a word I said! Stiff luck, I thought. I’d asked properly. Anyway, who was going to notice that a couple of bricks were missing? 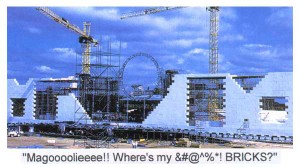 That question was answered the next day when the wall was put up during a trial run. It was a bit of a shock, actually. Let’s just say that my sister borrowed a few more bricks than I expected her to! Roger absolutely freaked out, and immediately sought me out to see what the hell I’d done with the other half of his wall. ( Don’t ask me how he knew I had anything to do with it! )

Anyway, to cut a long story short, we had to make a frantic dash to England to grab the bricks, in order to have them back in time for the show. It was done in such a rush that some of my sister’s furniture was still in the boxes! That worked out well, though, because Roger ended up using the furniture pieces in Nobody Home and One Of My Turns. Mind you, I wasn’t at all happy when he tossed some of it out the window. I said to him “Roger, you know you’re going to have to pay for that armchair and lamp shade!”