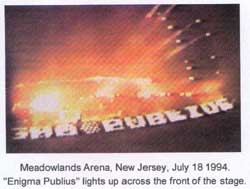 Enigma Publius took the Floyd world by storm. But unfortunately it was only ever meant to be a wild goose chase. That made the whole thing about as much fun for fans as trying to find hay in a needlestack.

I’d often joked to David Gilmour about Pink Floyd fans’ ability to find deep, heavy meanings within songs where they didn’t actually exist. We all loved dredging through albums hour after hour, listening for the slightest hint of some answers or some special meaning. We’d play the albums backwards, or synchronise them with movies like The Wizard Of Oz, desperately searching for the messages we were certain were buried in the songs.

David used to chuckle quite a bit about this. In interviews he enjoyed throwing out little riddles every now and again, loading his answers with other questions, or being very secretive and evasive, as if there was something in the pipeline for fans to get really excited about. Because The Division Bell album largely dealt with communication, he decided that this was the time to really give the fans something to search for.

With this thought in mind David and I spent a fair bit of time formulating some kind of mysterious character. To come up with ideas we’d muck around with plays on words, cryptic messages, anagrams, all sorts of stuff. As we shared an interest in these things we had quite a bit of fun with it all. Some of the ideas we ended up with were really good, but David was a little concerned they might be too easy to work out. The whole point of this exercise was to make it unsolvable. So we set about to make it really, reeaallyy, extreeeemely difficult.

As most would know, David is multi-lingual. Aside from English he is fluent in French, and can speak German. But few would be aware of his passion for Latin. One night he was toying around with Latin names and terms, then making anagrams of them, and came up with quite an astonishing result. So much so, he called me up at about midnight to tell me he’d “got it!”

He told me he’d thought of the perfect “imaginary” character. Someone who actually did exist, but who no-one knew about. ME! And with me in mind he came up with a Latin phrase. But what he hadn’t counted on was the fact that when the phrase was jumbled up into an anagram, what he came up with was just as applicable and significant as the phrase itself.

Out of the anagram came ENIGMA, which means a riddle ( and which is what the whole thing was in the first place ) and PUBLIUS, which was the name of a New Testament biblical character who was the “chief man” of the island of Melita, or Malta as we know it. That was incredible because David Gilmour can himself lay claim to being a “chief man of Malta” in at least an honorary capacity. I can explain:

During the Delicate Sound Of Thunder tour Pink Floyd played a free concert on a barge in Venice which caused so many problems that the Mayor and the entire city council resigned. This caused much mirth among the rival council of Malta that they offered David Gilmour “The keys to Malta any time he felt inclined to visit”. That was provided Pink Floyd didn’t play any gigs there.

Alright, that’s great, I hear you saying. The “Publius” bit can relate to Gilmour himself, but what was the Latin phrase, and how does it relate to me? Well, don’t forget ENIGMA PUBLIUS was the anagram, not the character. The actual character was MAGULI N SUPEBI, which is Latin for “MAGOOLIE, THE SUPERB ONE”.

I was at the same time amazed at what David had come up with, but also rather flattered that he’d thought of me in such a way, despite all the magooliness I’d been responsible for throughout my association with him and Pink Floyd. ( Then again it might be entirely sarcastic. I suppose that’d make more sense. But David never gave any indication that that was the case.)

All that aside, and even ignoring the Malta connection I still find it amazing how the pieces fitted together. The whole ENIGMA / MAGOOLIE structure was uncanny, not only in the way it worked as a riddle, but in the way it echoed real life. Here is Pink Floyd teasing fans with an unsolvable mystery:

To say the mystery was unslolvable or unsolved is to do an injustice to one particularly gifted individual. To our astonishment David Gilmour received an email which said;

“Dear David, I believe Enigma Publius is someone by the name of Maguli, or perhaps a modern derivative. However, all my research into Pink Floyd has failed to locate anyone with this name. Who is he, and why has he been afforded such an accolade as to be esteemed ‘superb’?”

Ahh, Stephen Hawking. The voice of “Keep Talking”! We were so impressed by this letter that David momentarily entertained the notion of exposing the answer to the Enigma to the world, thus revealing Floyd’s best kept secret, Albert Magoolie. But the seating collapse at Earls Court scuttled that idea once and for all. Instead, the last thing I did before returning to Australia was send Stephen Hawking this reply;

“Dear Stephen, I cannot fathom how a man of such vast learning and superior intellect could come to a conclusion so embarrassingly wide of the mark. I suggest you return to the drawing board and attempt to find a solution which at least resembles something approaching sensible.

And besides, I don’t have the foggiest idea what you are talking about!”

Thus the Enigma Publius was abandoned forever. Sorry to all those who wasted their time trying to work it out.