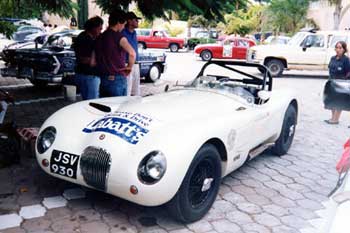 After The Wall Live In Berlin, my next Floydian contact was when I was asked to join David Gilmour, Nick Mason and Steve O’Rourke for the making of La Carreras Panamericana.

Going to Mexico for a car race didn’t excite me too much. Actually I was quite surprised Nick and David asked me to join them in the first place. I think their idea was that, having no interest whatsoever in cars or racing, I’d be able to work for them and stay out of any trouble. I certainly wouldn’t be going around tinkering with the cars and blowing them up!

That was certainly true, and I set about doing my jobs without distraction, while still managing to have a bit of a look around the countryside.

I was called upon to lug the guys’ gear from place to place, and tee up meals and accommodation. It was also my job to try and stop Steve O’Rourke from swearing, at which I failed miserably, hence the film’s M rating.

I was, as always, careful not to get my face on film, but I did momentarily appear in the movie by accident, although only from a distance. I’d been watching the cars assembling for the start of the race ( so exciting I could barely contain myself! ). With so much time and so little to do I had to find amusement somehow. In the end it came down to either having a chuckle at the way racers were trying to stick the signs and numbers on their vehicles, or spot-welding my eyelids to a flagpole. Tough choice, but I went with the former.

A few were doing a reasonable job with their stickers, some had no idea whatsoever, but one team in particular was making such a hash of it that I just had to put my signwriting experience to use and help them out.

If you look closely enough you can see me sticking the first 6 on car number 66, but once that was done I kept out-of-picture. Not that anyone was upset with my little cameo anyhow. Nick was at first a little concerned, and hastily ushered a woman to stand in front of me. Dave barely noticed me, and wasn’t bothered by my accidental appearance at all. Not even Sherlock Holmes could have possibly looked at it and said, “I suspect that the man putting the numbers on car 66 is an Australian who’s been secretly working for Pink Floyd to pay off his debts!”

Then again, you wouldn’t have needed to be Sherlock Holmes to deduce that my next stunt was the dumbest thing I’ve ever done in my life. I’m almost too ashamed to tell you about it, but for the sake of this story I will.

( Deep breath ) Ok……….On the night before the last day of the race I was reading through David Gilmour’s navigational guide, and thought I’d have a bit of fun with it. Just for a laugh I altered one of the directions described on the last stage from “Serious turn to the RIGHT” to “Gentle turn to the LEFT”.

The next day it was with indescribable horror I learnt that Steve crashed their car at that particular bend. I never thought for one moment they’d actually fall for it.

I was relieved, of course that they were ok, although Steve had a broken leg, and Dave some nasty cuts. But the worst bit was I knew I’d have to own up to my stupidity.

I sat on my confession for a few days while Dave and Steve recovered. In the hospital the incident was discussed and analyzed at length. All would soon agree that the crash was more likely a result of a pace notes problem than driver error.

Of course this all came back on Dave. He vowed there was a mistake on the page, and got understandably peeved at suggestions he may have simply misread them. As the notes had disappeared or been destroyed, there was no way of proving he was right. This led to a fair bit of tension, which I knew only my coming clean would relieve. 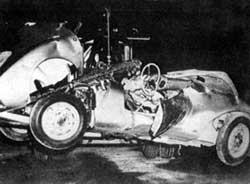 So I dropped my bombshell and prepared to be blown to pieces. But instead my revelation was dismissed. Dave thought I was just being chivalrous, trying to diffuse the situation and take the heat off him. And Steve dismissed it as well, saying “What kind of a *&@#$! idiots do you take us for? Are you trying to say we wouldn’t tell the @^&*!$/ difference?”

In the end it was accepted that the problem lay with the pace notes, and that somehow Steve and Dave had got a dodgy copy. Then everyone settled down and just focused on the fact that they’d had a pretty good race and had lived to sell the tale.

As for me, that was the last practical joke I ever played. I may have done some dumb things since, but never deliberately.

To this day it still haunts me, the bit on the film where Nick Mason says,

( co driver Val Lindsay and I were ) “feeling reasonably pleased with ourselves and arrived to find that um, Steve and Dave had gone over the edge. Um, we’d known nothing about it at all… There was no sign on the road as we drove through.

Ah, they went into a corner too fast….either through misreading the pace notes or whatever, and um.. basically they took off over the edge of a cliff and landed, I think, upside down on a small road below.

Dave, ah, is fine.. maybe a few cuts and bruises, and Steve – a broken leg. The general feeling seems to be that they’re incredibly lucky to have got away so lightly.”