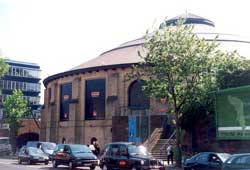 The gig at a famous old building in the north of London known as the Roundhouse was The Pink Floyd’s largest to date. It was a huge success, and you could probably say it was their official launch. But it certainly didn’t pass without incident.

It was an “all night rave”, and Floyd weren’t taking the stage till very late. I was already really tired by the time we got there (driving while under the influence of sleep deprivation was something I would become accustomed to), and as I drove the van around a corner I was suddenly confronted by a six foot high mountain of jelly! This was not something you expect to see every day.

With my reflexes somewhat slowed by the lateness of the hour, I ploughed the van into the jelly. Amid all the slush and the gasps from outside the van, and the howls of derision from within, my jocular instincts took over. I just turned to the guys and said “Well….it’s no good playing here. This venue’s desserted!”

Once we’d got the band’s gear inside I went back out and cleaned up whatever jelly hadn’t already been licked off the van and the road. It at least gave me something to do for a while, because I had no real interest in the concert itself.

The main reason for that was because I’m a non-drinker. I soon learned that staying sober at a gig like that makes you about as popular as broken glass at a heomopheliacs convention. Compounding my problem was the fact that I was also a non-smoker, which made me doubly odd. I mean, you could be a totally pickled rolling drunk spluttering nonsense about the origins of the cosmos and the price of fags, or a drugged-out acid-head with sixty five non-matching items of clothing and eyes like black holes in the sky, that was fine. But a clear-headed non-drinking non-smoker was just too weird for words. That was full-on freakshow material!

So the thought of wandering around trying to elicit lucid conversation from spaced out hippies and beatniks to the backdrop of psychedelic music and brain-fried poetry wasn’t nearly as appealing to me as sitting out in the van watching the sky slowly change colour. 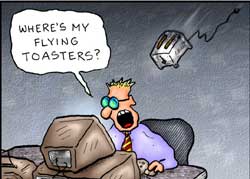 I managed to get a bit of sleep in the van, then when I got up I started to make myself some breakfast. Knowing the gig went until dawn, I brought everything bar the kitchen sink. I pulled out my toaster, and an extension lead which I plugged in to a power point beside the toilets at the back of the building. As I did this I could hear the familiar riff of Interstellar Overdrive being played on stage with a great deal of energy.

I got back to the van, and just as I was putting a couple of slices of bread into the toaster a motorbike hurtled past, ridden by one of the guys from The Soft Machine. The problem was, the motorbike caught on the extension lead, ripping the toaster from my grasp. I watched in horror as the toaster flew through the air, smashing through the toilet window ( knocking out an unfortunate hippy ), then it landed in the toilet bowl, instantly shutting down the venue’s entire power supply!

( First the exploding jelly mountain, then the flying toaster in the toilet – perhaps this was a forerunner to “a clock they sent through a washing machine”. Only at such bizarre “happenings” could you ever experience such bizarre happenings! )

I quickly removed all incriminating evidence from the scene, and helped the Floyd pack up. As we left, a very excited Syd declared “You could say that Interstellar Overdrive was quite literally a show-stopper!”

We all laughed. Then I said, to four rather nonplussed expressions, “I can see the headlines now: ‘Pink Floyd, the TOAST of London’s Underground’.”

Waving My Arms In The Air ->