This is the concert that has been said was the catalyst for Roger Waters writing The Wall.

Many of the crowd at the show were in an unruly mood, with some idiots letting off fireworks in the crowd.

At one stage an over zealous fan started to get very close to Roger who beckoned the fan closer by calling out “here piggy”.

When the fan got close enough Roger spat in his face.

Roger has said that he regreted this incident and it got him to thinking how Pink Floyd and their fans had become distant and that a wall had come betwen them.

The rest is history!

The Pink Floyd concert in 1977 was the first big thing to happen at the Olympic Stadium since the actual Olympics in 1976. There were two big concerts that summer at the Stadium. Pink Floyd and Emerson, Lake & Palmer (the latter was actually professionally released, audio and video). There was a lot of hype about the show because it was general admission.

This article was AFG correspondant Daniel who wished to remain anonomous.

Daniel was a University student at the time and went to both shows (PF and ELP). The actual party started long before the show… since it was general admission, people invaded the place as soon as the stadium opened its doors (see above).

The concert itself set an all-time record attendance at the Olympic Stadium of somewhere around 80,000 people. Imagine that a couple thousand people get there a few hours early cause it’s general admission, it’s summer time, etc … but it falls on a Wednesday night, kind of a shitty day to have a concert.

At 6 PM, Daniel estimated 30 000 people were inside already but the band is obviously not going to play until 8 PM comes around. Now you have 30 000 people, anxiously waiting what has been advertised as the show of their lives, and they’ve got 2 hours in front of them of “doing nothing”. What do they do?

They get rowdy and they drink beer. 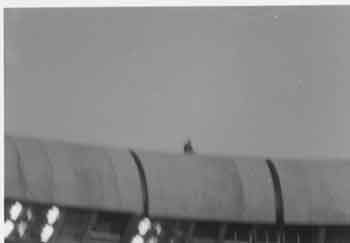 There’s a guy on the roof! (Above) Many people thought this was a spectacular entrance by one of the band members!

Daniel also remembers Roger freaking out after a firework that pretty much everyone heard in the Stadium! And he also remembers someone throwing a bottle of beer (that’s glass people!) after Roger’s comment! Remember, this is the first big concert at the Stadium and the security DOES NOT really know how to handle big events of this type: People sneak in glass bottles, recorders, etc.

At one point towards the end of the show, a drunk spectator (near Daniel) lets off a “screamer”, which is basically a small rocket that makes a lot of noise and makes a ton of smoke (BTW, this is NOT the famous Pigs On The Wing firework) which caused a big crowd movement and more pushing and screaming.Some people leave during the Blues number (That Pink Floyd played to try to calm the crowd) but most of the crowd stayed to see the band do the Blues number while roadies get the equipment out (apparently Nick Mason was HILARIOUS since at the end he basically had nothing but his seat and one of his drums).

Overall, the show itself was not bad but t
The crowd was too much. The party continued on the streets later on. Apparently the ELP concert was MUCH more “civilized”

All photos in this article were taken used with permision by Guy Menard our thanks go out.

This next set of pictures were taken before the show in the morning. We will call the guy that took the pics Mike.

Mike had a friend working at the Stadium and his friend let him inside early in the morning on July 6th to get a few shots of the venue, the mixing desk, etc. This guy’s in luck: Nick and Roger are there and Dave and Rick show up a couple minutes later! F*ck the mixing desk, he’s taking shots of the band! 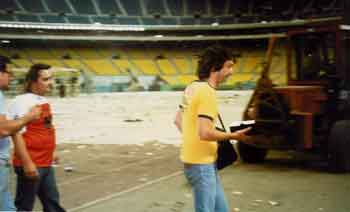 (Above) Nick Mason with his Animals yellow shirt… Nick takes notes of the venue, takes pictures as well (at the time, the stadium was considered as some sort of architectural feat and maybe Nick had an architectural interest in the place). 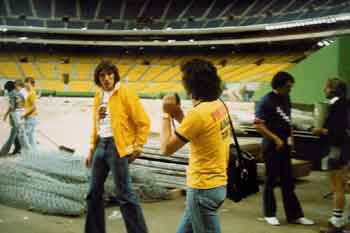 (Above) Roger and Nick talk and take pictures, Steve O’Rourke is talking to the guy with the cast. (see right of picture) 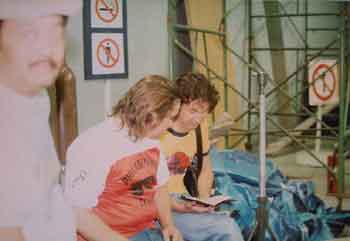 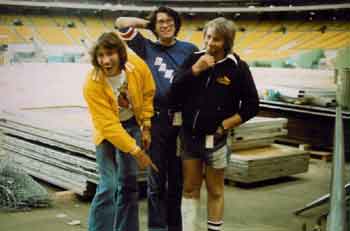 Roger Waters and Steve O’Rourke having a laugh at the guy in the cast who presumably is somebody who worked on the tour. 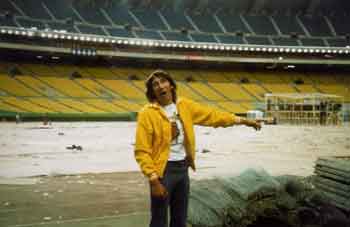 (Above) Roger Waters in a somewhat happy mood. Roger is pointing to the guy in the cast.

A Fleeting Glimpse wishes to thank Guy Menard & Mike for taking these pictures and a very special thanks goes to Philippe Legault for supplying them.