The Wall concert on February 7th, 1980 in Los Angeles is remembered for a fire which interrupted the show. This was caused, as we all know, by some pyrotechnics going off and setting some overhead drapes alight. But there was a little more to it than just a technical hiccup.

Nick Mason had turned 35 just 11 days earlier, but amid all the preparations, organisation and rehearsals for the upcoming US shows, his big day went largely unnoticed. I found this a bit sad, as I reckon hitting 35 is pretty significant. Worse still, I knew how much Nick loved surprises. So I came up with what I thought at the time was a brilliant idea. What better way could there be to celebrate a special birthday than in front of a massive crowd on the first night of one of the great rock extravaganzas of all time?

The Wall show was ticking along nicely. If my memory serves me correctly they were in the middle of Empty Spaces. I had a birthday cake with 35 candles, and was just checking to make sure they’d all light, when Roger spotted me and this horrified look came over his face. He must have thought I was about to come onto the stage there and then! (Blimey, Rog, give me a little credit. How inappropriate would that have been? I wasn’t intending to come on until One Of My Turns.)

Panic-stricken, Roger raced over to me and gave me an almighty shove, knocking the cake out of my hands and into a box of fireworks, which were immediately ignited by the candles.

It was widely reported that Roger got pretty frantic trying to put out the fire, but I can tell you most of his energy was spent trying to knock my head off.

The only good thing to come out of it was that Nick was really touched by my idea. I think deep down he really would have liked the crowd to break into a chorus of “Happy Birthday to Nick”, but he suggested that it might’ve worked better if I’d brought the cake out once the performance was over.

Of course, Roger’s only comment after the show was, “You know you’re going to have to pay for those $@!*&^% drapes.”

Unfortunately The Wall shows were the final straw as far as my involvement with the band at that time. I’d had a few altercations with the American roadies who were employed to construct the wall. Those idiots had no idea whatsoever, yet they had the nerve to blame me every time something stuffed up! 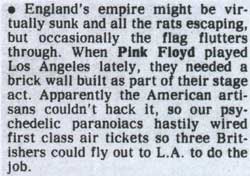 We finally ended up bringing some guys across from England to do the job. The problem was, they too seemed a bit stressed whenever I tried to help. Back in England their worst fears were realised during rehearsals the day before the first Earls Court show when I accidently brought the wall crashing down during Dave’s Comfortably Numb solo.

Needless to say I was banned from the construction process on the spot! But as it turned out I ended up with a far better job to do. What had been one of my worst ever stuff-ups turned out to be my greatest ever stroke of luck, although I can’t say the same for poor “surrogate” drummer Willie Wilson.

Willie was in the worst possible place at the worst possible time when the wall came down. He copped some stray scaffolding across the back of the head and was knocked completely senseless. He didn’t know who he was or where he was, and had not the slightest idea who Pink Floyd were. Things didn’t look good. A decent night’s sleep would possibly cure him, but how could you be sure? With the concert the next day, the band were facing the more likely prospect of being down one drummer! And it wasn’t a case of just grabbing any drummer to replace Willie if he didn’t come good, someone needed to know all the songs inside out.

A typically unruffled Dave Gilmour, displaying a cool head and the utmost common sense, decided that I’d be more than capable of filling in until Willie’s faculties had returned. So instead of slaving over hot bricks, I got to play the drums during the next rehearsals.

The following morning everyone waited to see how Willie Wilson was. He seemed to have most of his memory back, but was seriously crook with a massive migraine. Dave wasn’t overly fazed, but I was sure Roger reckoned I’d deliberately knocked Willie out so I could take his spot.

As you could imagine I was not totally unhappy with Willie’s state of unwellness. For the first time in my long association with Pink Floyd I got to play the drums at a concert!

A few more run-throughs were done the next day as the concert approached. News filtered through that Floyd’s regular surrogate drummer was taken ill, and people began asking about his replacement. I was standing with Dave as a couple of reporters came over. They asked my name and in a moment of historical romanticism I said “Clive”, after Dave’s Jokers Wild drummer Clive Wellham.

I winked at Dave, and he smiled back, knowing what the connection was instantly.

The concert that night went without too many hitches. I handled all the necessary drumming parts pretty well, and even started to wonder if I could get a more regular gig. ( Hmmmm, if I could just find a way to belt Willie over the head before each show……. )

But that first show was the one and only. Willie still wasn’t 100% the next night, but Roger was determined not to let me perform with the band more than once. ( I think he was worried my magnetic stage presence might steal his limelight! )

Actually there was more to it than that. I was to discover shortly afterwards that despite still owing the band a considerable sum of money, Floyd decided to cut their losses and get rid of me. The shows were already running at a loss, and they felt they couldn’t afford the risk of any further liabilities. So my first appearance on stage with the band ironically signalled my departure.

I remember sitting at home on the night of… I think it would’ve been the fifth Wall gig, waiting for the guys to pick me up but they just didn’t show. Apparently on their way to pick me up someone said, “Should we pick up Magoolie?” and someone else said, “Nah. Let’s not bother.” And that was….the end.