The movie Pink Floyd Live In Pompeii was my ticket back into the studio. The extra workload required to cater for the cameraman and crew meant that I needed to be on hand to help out. I was given jobs like assisting the sound and lighting crews, taking care of their general running around. I also helped out in the canteen, even taking care of catering orders ( oysters by the truckload in Paris, and at EMI, round apple pies for all! ).

All this was, of course, on the provision that I didn’t stuff anything up, and that I stayed out of any camera shots. Needless to say I followed these instructions to the letter. Or at least to the best of my ability. But I did manage the odd one-point-five seconds of fame throughout the film. 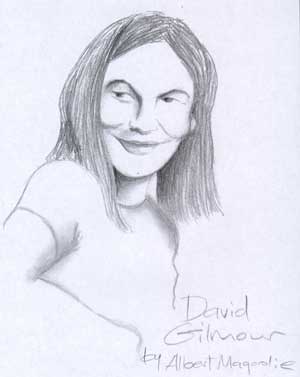 One of my starring moments occurred just a few seconds before Nick requested an apple pie without the crust, when I placed some spoons on the table. ( Marvellous performance, that. How I failed to get my name in the credits I’ll never know! )

Then there was the slightly less obvious appearance with Dave in the studio when he was making those funny wow-wowy sounds on his guitar. If you look closely you can see my shadow on the wall behind his left shoulder. I was actually drawing a picture of him at the time. Pathetic really, but I was trying to resuscitate my interest in art, which had fallen dormant while working with the Floyd. ( That’s why Dave Gilmour was reading the Allen Jones book, Figures. I’d borrowed it from the library after deciding to look into pop art. Though I must say the book killed off any interest I may have had in that particular medium right there and then.) Dave liked the drawing, but Roger was less than impressed. He said I’d given Dave the kind of smile that only a rather dull child could’ve drawn.

Despite my generally good behaviour throughout the making of the film, there was one particular moment when I was lulled into a momentary lapse of reason. But as you’ll see it wasn’t my fault.

Picture this; I’m hanging around ancient ruins while Pink Floyd plays a concert to an ampitheatre jam-packed full of no people. How much do you think there was for me to do?

Dead right. Not a lot.

So to amuse myself I, & a guy called Brian (I think he was Road Manager or something) found these long, slender, hollow reeds nearby which made great pea-shooters. We’d shoot seeds or tiny little stones. The distance and accuracy we could achieve with them was quite remarkable.

Eventually it came time to record and film Careful With That Axe, Eugene. Not many people would be aware that this piece was actually recorded in Paris. By this stage we’d already packed up and left Pompeii. But Brian and I had kept our pea-shooters, and brought them along to the “shoot” ( which it became quite literally ). Although neither of us dared show Roger, knowing he’d probably want to confiscate them.

Everything was set up for filming, and once Floyd started Careful With That Axe, Eugene, Brian and I quietly pulled out our pea-shooters and lined up various targets. The music was building up, but just as Roger started saying the “Careful with that axe, Eugene” bit, Dave moved out of camera, motioned us over and said “I’ll shout you guys supper tonight if you can hit Roger in the head.”

We didn’t realise Dave had noticed what we were doing, though it was clear Roger hadn’t. Brian and I mulled over the idea for a second or two, wondering if we should dare, but very quickly decided yes we should!

Brian had the first shot. Roger was moving around a bit doing all his blood-curdling screams, and the shot missed by a whisker. Then it was my turn. I waited until the screaming bit was over, and as Roger eased back doing some softer vocal sounds I had my go.

ZIIINNNNGGG! The shot got him in the side of the head*.

He lurched back suddenly, then quickly glanced over his shoulder at the other guys as if to say, “Did you see that? I think I just got hit by an insect!” Rick noticed something had happened, though Dave remained so cool that you’d never even know he saw Roger get hit. But as soon as the light was turned off him Dave moved out of shot again and said, “What will it be? I hear there are some good French restaurants around these parts.”

*If you have Pompeii on video you’ll see it, but you won’t find the incident on the Director’s Cut on DVD, as it was replaced by extra footage of flowing lava ( thanks a lot, Adrian ). However it is still there on the “Original Concert” on the DVD, which is great because you can zoom in and see Roger’s reaction a bit more clearly. ( You’ll find it immediately after the shot of lava that looks like a glowing red fork ).

One final point to mention on the topic of Pompeii concerns the gong that Roger smashes like a lunatic during A Saucerful Of Secrets. You’ll notice that towards the bottom of the gong there is a white, diamond shaped discolouration. This had nothing to do with me. Although it did relate to me. It was the result of a gag thought up by David Gilmour, and added to by Nick Mason.

Nick often had digs at Roger for being too timid in his banging of the gong on stage. He’d always say Roger looked as though he “didn’t want to hurt it”. David Gilmour agreed, and he came up with what he thought would be the perfect solution. Before a gig one day he stuck a photo of me right in the middle of the gong! Nick thought this was a brilliant idea, but wanted to get Roger even madder still. So he cut out this white stick-on square, stuck it on the gong, and wrote on it “ROGER’S HERO”, with an arrow pointing to my picture.

That night during A Saucerful Of Secrets Roger went ballistic! He hit the gong so hard that he nearly sent it flying off the back of the stage. Instead it hit an amplifier, which then exploded. ( This is where the idea originated for the gong bursting into flames.) The problem was, the flames licked the bottom of the gong, welding the white sticker to it. Dave had only stuck my picture there with a few bits of clear adhesive tape, which came off without any difficulty. But despite eventually removing most of Nick’s white square, a mark was left behind that they were never able to get rid of. Still, it was to serve as a constant reminder to Roger, who absolutely belted the living daylights out of the gong from that time forth.