In case you missed my name at the introduction, it’s Albert Magoolie, and I’m very pleased to be here.

I suppose the best way to start this story is to apportion blame to someone else. I can legitimately do that in this case, because it’s actually my older brother Norbert who was the one responsible for the sequence of events which led me to Pink Floyd.

It was because of him I ended up in England. He fancied himself as a bit of a singer, and dreamt of busking on the Underground in London. You know, strumming away on an acoustic guitar, singing Beatles and Bob Dylan songs as people emptied their bulging wallets into his guitar case. I played the drums, so he wanted me to tag along, and for us to form a sort of busking duo. He’d saved up a fair bit of money over time, and in 1965 he talked me into making the trip to London with him on an extended working holiday. 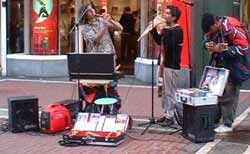 Problems arose on our first train station gig which would immediately prove insurmountable. We arrived on this platform, Norbert with his guitar case, me with a pair of drumsticks, a few ice cream containers and some saucepans. He opened up the guitar case and, lo and behold, there was nothing inside it! I said, “Um… Norb, no guitar?” He said, “Oh, yeah. I never ended up learning how to play.”

I was, to say the least, a little perplexed. But he just sort of shrugged his shoulders, none too fussed, and said, “Y’know how there’s some things you always want to do, but ya just never get round to?”

I should’ve seen it coming. Every couple of years he’d drag out his old guitar and practice a few chords, then it’d go back into the cupboard again, alongside his nunchucks, his property investment portfolios, and his do-it-yourself brain surgery kit.

Anyway, despite this fairly substantial setback we launched into a song, me tapping away on my set of kitchen receptacles, and Norbert doing his best Bob Dylan, waiting for the passing commuters to spill their cash into our superfluous guitar case.

We got a few coins, but actually we mainly got notes. Which might sound great, but unfortunately the notes we got weren’t English currency, they were handwritten notes, with comments like “Please shut up”, “You guys are terrible”, “Stop or I’ll shoot!”, and my favourite, “I strongly recommend you fellows desist, forthwith, from your undignified exercise in public humiliation”.

As for the coins, Norbert copped two in the back of the head, and I have a little scar above my left eye where the other one hit me.

I will always keep in my memory…. to keep me sober, the applause we heard as a railway employee ushered us out of there. “I think it would be in your best interests to move along, chaps,” were his exact words. Although I’m sure he was actually thinking “Not on my platform you don’t, boys. Get the hell out of here!”

Over recent times this tale has been delivered an extremely ironic twist. I remember the railway guy’s name tag said ‘C.TURNER’ And as Norbert and I were being escorted out someone yelled “That’s the way, Col. Get rid of ’em!” The owner of ‘A Fleeting Glimpse’ has remained rather vague and evasive when quizzed over this incident.

Anyway the busking idea went down the tube ( pardon the pun ) but Norbert soon had another grand plan. He certainly wasn’t short of ideas. There was always some wild moneymaking scheme ticking over in his brain. But you could’ve knocked me over with a sledgehammer when he announced his – I should say our – next venture.

I remember him coming into my room and saying, “Albert, you know how I’ve always wanted to be a used car salesman?” I said, “No, I always thought you wanted to be a fire engine.” He said, “Oh yeah right, very funny…… Did I?……Anyway it doesn’t matter. The fact is I’ve just leased a used car lot and got hold of some cars that are going to make us a mint!” 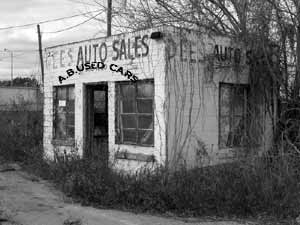 Suddenly I was a used car salesman, and we set to work doing up this car lot. Norbert thought up a name for it, Absolute Best Used Cars, which we shortened to A.B.. I’m a signwriter by trade, so I made the sign, and for the next few months we attempted to sell pre-loved automobiles. It wasn’t a huge success. In fact it was spectacularly unsuccessful. We didn’t sell one car. It was such a flop that we finally started wondering why. Then I arrived at work one day, looked up at the sign, and it hit me…. A.B.USED CARS. We thought of it as Absolute Best, but to everyone else our cars were ABUSED!

By the time we’d worked that out we’d lost so much money we just had to get out of there and look at doing something else. But things just went from bad to worse. Norbert’s next idea was to sell car batteries from a van we’d had for sale at the car yard. He found a place where we could get batteries really cheap, and he came up with his own brand name and a slogan to go with it. The brand name he thought up was Soltan, and the slogan was “Get charged with a Soltan Battery!” I painted signs on the van, and soon we were driving around in our new, mobile battery shop.

Norbert was so proud of his slogan, but the problem was some people found it rather provocative. We had every rough-head, nutter, ratbag and thug come out of the woodwork wanting to take us up on the offer!

We ended up getting our heads beaten in everywhere we went. The cops got so sick of breaking up fights involving us that they threw Norbert in the clink! They reckoned he deserved to be locked up for coming up with such a stupid idea. I got let off by pretending to be a deaf mute. It seemed like the only logical explanation for someone getting involved with Norbert.

So I was left on my own, with no job, no cash and no idea. The first thing I had to do was sell the van, so I removed the battery signs, put a for sale notice on it, and parked it outside our flat.

After a couple of days a big, tall, rather scary-looking guy pulled up on a motorbike and asked how much I wanted for it. I answered in my Australian accent, which led to a long conversation about what I’d been up to during my stay in England, and why I was selling a van out on the street.

So I went through my embarrassing tale to this fellow, whose name was Roger Waters. He actually seemed quite intrigued by it all. Particularly the Soltan Battery bit. I remember very distinctly Roger saying “So your brother’s in jail?”. It clearly seemed to trigger an idea in his head. ( Sure enough, some twenty years later he was to use that line on Radio KAOS.)

More importantly, the conversation got onto what I was doing now, which was nothing. Just looking for work. Any work at all. Roger explained he had a band which was starting to get some attention, and asked if I’d be interested in helping out. Y’know, lugging their gear, driving the van, doing general dogsbody running around sort of stuff. Of course I jumped at the opportunity, and even offered to signwrite the band’s name on the van.

Roger explained that they couldn’t pay me big bucks, but anything would’ve been better than what I was earning previously. Before working with them I was on a very very paltry sort of amount of earnings. I mean bread line. Bread line and less.