The next time I was to set foot aboard David Gilmour’s floating houseboat / studio Astoria, the recording of The Division Bell was well under way. It was refreshing to find David, Nick and Rick physically playing music together. With just a couple of other musicians on board, they came up with songs simply by playing. By jamming. Just like I hoped they could do when they started A Momentary Lapse Of Reason, until I discovered Nick and Rick’s peculiar problems.

This time everything felt so much freer and easier. I really think you can hear that when you compare the two albums. The only time there was any real stress was towards the end, simply because the Pulse tour was about to begin, and time was running out fast.

As you can imagine, the stage show required a helluva lot of attention and rehearsal. At the same time the album still needed to be finished, and this put heaps of pressure on David Gilmour. Let’s face it, if you’re going on a world tour to promote a new album, it’s probably a good idea to actually have the album out.

Despite the rush at the end, everything managed to come together beautifully. The album was great, Storm Thorgerson’s cover was one of the best of all time, and the tour was phenominally successful. The stage set up was so good that it even made The Delicate Sound Of Thunder show look a little lame. Just a little.

Sadly, despite all this, I still managed to find a way to ruin everything!

The show was being set up at Earls Court in London. The first show there for 13 years. It was my job to help with the construction of seating. We were each given a specific number of nuts and bolts, but somehow I ended up with about a dozen left over.

I looked around for the construction manager, to find out what to do with the extra bolts, thinking that someone must have been short at another section of seats. I was unable to track him down. Anyway, all the rest of the seats went up without any problems. So I thought these bolts must have been spares. 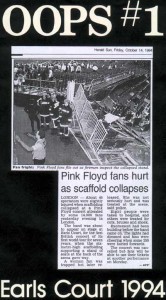 That was until the show began.

The first note of Shine On You Crazy Diamond filled the hall, only to be drowned out by a loud creaking sound. This was followed by a sickening series of thuds, about 250 in all, interspersed with screams that made Careful With That Axe sound like Grantchester Meadows!

David Gilmour came to the microphone, apologising to everyone, and urging for calm. First he said “Could everybody please take their seats…… wherever they landed!” This brought a laugh, and a welcome touch of levity to the situation. Then he said “I think you should SUE somebody….. Er, not me though!” After this he turned to the rest of the band and added, “I know who I’d be sueing,” and in unison they all said “The Magoolie!”

David came off the stage and found me trying to hide inside one of the inflatable pigs that come out during One Of These Days. I was in a panic, knowing that it wouldn’t take long for the seating crew to work out who was to blame for the accident. Fortunately there were no serious injuries, but that didn’t mean no-one was going to release the hounds of litigation in my direction. And David was clearly aware of the gravity of the situation, too. Of all the stuff-ups I’d ever caused, this was the worst. There were about 1200 people on those seats. The fact that nobody was killed was nothing but pure fluke. It was time for me to, let’s use a rather ironic turn of phrase here, time for me to bolt!

David said “Albert, this is serious. You’ll have to get the hell out of here. And fast.” He didn’t seem overly upset about the cancellation of the concert. He remained cool, as he always did. But I sensed a real disappointment in his voice that things would have to end this way.

He organised some money for me to buy a plane ticket back to Australia. “Go back home,” he said. “And when you get there, change your name. And don’t tell a soul you ever worked for us, or they’ll track you down sooner or later.”

I hastily said my goodbyes to the band members. Rick was pretty sad that I had to shoot through like this, but both he and Nick always suspected that a departure under circumstances like these was always on the cards. It actually seemed the only appropriate way for me to bow out.

The saddest farewell was saved for Sam Brown. Out of all the touring party she was my biggest fan. I could pull a stunt that would make everyone else cringe, but Sam would be doubled over in fits of laughter. I only had to hold up a finger and she’d crack up ( especially if I poked myself in the eye with it ). You just can’t buy an audience like that.

I remember seeing Sam in concert in Melbourne many years ago. She was the support act for an Australian pop icon, John Farnham. I thought that night, “This Sam Brown’s a real scallywag!” When she came onboard to tour with Pink Floyd I had that fact confirmed beyond any shadow of doubt. If you watch the Pulse video you’ll discover that for yourself. Watch her mucking around with Claudia Fontaine and Durga McBroom during Money. That’s 100% pure scallywagness on display there.

Yes, so that was very sad indeed. Sam cried and gave me a big hug. And I snuck out of Earls Court via a back exit, never to return. 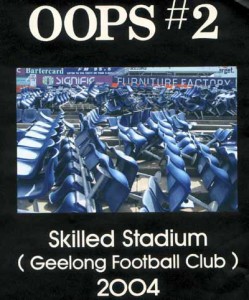 The show was rescheduled to the band’s day off. Those who’d been sitting on the Magoolie seats were invited backstage, and received T-shirts which said “I SURVIVED THE 1994 EARLS COURT SEATING COLLAPSE”. One other T-shirt was printed for me, with the word “SURVIVED” replaced by the word “CAUSED”.

( With somewhat bizarre irony, having fled England after causing a major seating collapse, lightning struck again ten years later when I caused a similar disaster while working at my local football stadium.)

Looking back, the consequences of my stuff-up became far weightier as the next few years passed. I suppose in the back of my mind I always thought that I’d end up back with the guys again at some point.

The dust would settle, all would be forgiven and forgotten. The threat of litigation would dissolve, and when they started on the next album they’d get me back again.

Yeah. The next album. Surely there’d be another one.

I remember Nick Mason talking about using material left over from The Division Bell for a “satellite” album. And David Gilmour had referred to The Division Bell as “a good start”. It certainly seemed as though there’d be more new stuff not far down the track.

But the years have rolled by, with nothing but a solo album from Rick, and a best of from Pink Floyd.

It just seems to leave a bit of a hole when you’re waiting and waiting for something to come out, and it never does. It’s like waiting for a band to come back on stage for an encore, only to have the house lights come back on, and find that they’ve already left for the airport.

There’s a line in a U2 song which goes, “I disappeared in you, you disappeared from me”. That’s how I imagine most Floyd fans would have felt once it became clear that Pink Floyd had indeed disappeared for the last time.