With everything that has come out in the open about Albert Magoolie and his relationship with Pink Floyd, A Fleeting Glimpse approached one of the few who knew of this particularly sensitive Floydian secret. We are delighted that Storm Thorgerson has agreed to share with us his thoughts and memories of Albert Magoolie:

I never thought I’d ever get the opportunity to say anything about Albert Magoolie. While there was always so much one could say, and one would love to say, we were all sworn to secrecy over this guy.

He started working for Pink Floyd way back in the very beginning, but he seemed to develop this uncanny ability to embarrass himself and the band, to the extent that they guys simply tried to pretend he didn’t exist. I even had to delete him from some photographs, which was no easy task back in those days. 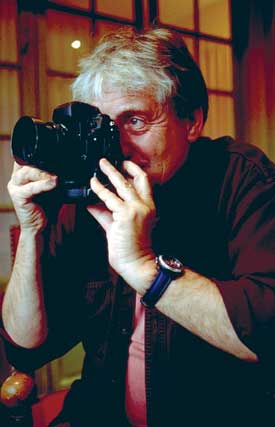 He’d muck things up in the studio while the Floyd were recording. He’d lose the band’s equipment, drop things, break things, burn things, knock things over – knock the guys over! At first he was working with them because they’d given him a job, but he only continued working with them to pay for all the damage he caused.

That aside, however, I believe he was an important – albeit very secret element in the overall story of Pink Floyd.

Personally I found Magoolie to be a guy who was always ready to offer his help. I think that this was the reason he ended up at so many album cover and publicity photo shoots. He’d do anything, and was always really enthusiastic. The problem was, you’d be in the middle of a shoot and he’d suddenly bob up doing or saying something crazy.

I suppose it was more of a problem for the rest of us because half the time what he did was actually quite funny, and you couldn’t help but crack up laughing.

One of the earliest examples was when we took the photo of the cow for Atom Heart Mother. We got it all set up, and just as we were about to take the picture, Magoolie appeared in front of the cow waving a red cape like a bullfighter!

Much later on there was stuff like what he did on Momentary Lapse, jumping across the beds. ( I noticed A Fleeting Glimpse has copy of the ’88 World Tour book on The World According To Andy. ) On the first day of shooting that album cover we’d spent ages setting up all the beds along the beach, then it damnwell started raining. While everyone’s freaking out and getting upset and angry, Magoolie yells out “Oh no! My mother’s worst nightmare. Eight hundred wet beds!”

On Wish You Were Here I reckon he almost drove us bonkers! There was one bit… You know the shot of the guy “swimming” in the sand? Well, Albert was just behind the sand dune in the background going, “Stroke, stroke! Come on, put some effort into it man,” like some deranged swimming coach.

We were all cracking up taking the pictures, and while all this was going on, the guy who was swimming did an absolutely brilliant job keeping a straight face. The problem was, as soon as we’d taken the shot and Albert had jumped up from behind the dune, our swimmer burst out laughing, copped a lungful of sand and almost coughed himself to death.

I think my favourite thing that he did was when we were shooting the cover of Delicate Sound Of Thunder. Everything was in place, then Magoolie waltzes up to the light bulb guy sitting there and says to him “Excuse me, mate…. you got a light?”

That was classic. But the thing is Albert doesn’t smoke. Apparently he’s never had so much as a puff of a cigarette in his life. Which is quite amazing in itself when you think of it, because with the stuff he comes out with, you’d think that…um, surely he must…. y’know…he must smoke something!

When I think back, I guess the only time things really got out of hand was during the Animals cover shoot. He really stuffed up badly a couple of times there.

On the first day he kept helping himself to the helium that we had there to inflate the pig. If you suck on helium it makes your voice go high, like a munchkin or something. Albert would suck on the stuff then he’d take his shoes off and kneel on them, making it look like he was really short, and say in this funny voice, “Hey, look at me, I’m a jockey.”

In the end he wasted so much helium that there wasn’t enough to fill the pig. Roger was none too impressed, and told him “You know you’re gonna have to pay for that !*$#^% helium.” And of course we all had to come back the next day.

I think we all know what happened on that fateful day. The pig was inflated and went up, all according to plan. Suddenly there was a gust of wind, which shouldn’t really have been a problem, but someone hadn’t anchored one of the guy ropes properly. Guess who…..? And off into the distance floated our forty foot, helium-filled centrepiece. 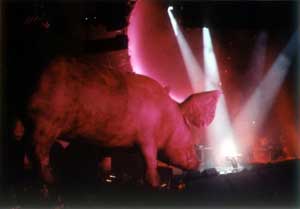 What made it worse was that the guy we’d teed up to shoot down the pig in the event of it taking off wasn’t there! We were all kicking ourselves, thinking no-one had told him he needed to come back again. But I found out years later that he was actually ill. Magoolie had got him doing the helium thing with him on the first day of shooting, and the next day he was crook as a dog, throwing up all over the place.

So here we all were, looking around for our marksman to take down the flying pig, and instead we end up watching helplessly as it sailed majestically towards Kent!

The worst thing of all was that suddenly Magoolie started laughing. Roger, who’s about to slit the guy’s throat, says “What the %$&# are you laughing at?”, and Albert says “I suppose we’re all feeling a little dis-gruntled right now!”

Everyone lost it. We wanted to kill him, but instead we all cracked up. Except for Roger. He was still gonna kill him. But I think Albert’s life was saved by the fact that the rest of us were laughing.

But despite Magoolie’s many stuff-ups, I know that Dave thought a lot of him. It was amazing how quickly things fell apart once they got rid of him. And I think Dave realised just how important he’d been in keeping the band together. I mean, look at what happened in the studio during The Final Cut. You see, they’d gotten rid of him after The Wall. Up until then, whenever ever there was strife within the group he’d come along and say or do something that would re-direct the tension his way. In much the same way as a bodyguard throws himself in front of the President to take an assassin’s bullet.

Apparently he even tried to take the blame for Dave and Steve O’Rourke’s car crash during the race in Mexico! Just so the two of them wouldn’t blame each other. I remember Dave telling me about that. He thought it was such a superb thing to do. I remember him using that word, “superb”.

I’ll go out on a limb here and say that Pink Floyd could have covered the loss of Roger Waters and Rick Wright. They could’ve continued on ok without them, but dumping the Magoolie was their big mistake. I say that because it was only once Dave and Nick brought him back in ’86 that they started to get somewhere with A Momentary Lapse Of Reason. And that was before they brought Rick back.

So all of a sudden all the ingredients were there again, with the obvious exception of Roger. But it was a magic combination; David, Nick, Rick, Magoolie…… and Storm.