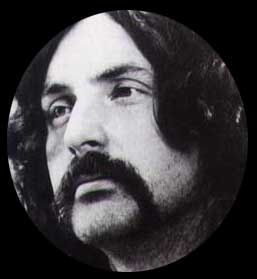 I moved across to where David and Bob were frantically trying to resuscitate Nick. He was still blabbering, his eyes rolling in his head. “Anything I can do?” I asked, expecting an answer along the lines of “Yeah, put on the heaviest pair of shoes you can find, and go for a swim!” But David said “Go and pull the food out of the freezer for us.”

I raced to the kitchen, opened the freezer and brought back whatever food was in it. “No, no,” David said, “leave it in the kitchen.”Then he and Bob carried Nick in and slipped his head into the empty freezer. I stood there shocked. Bob said “Believe me, this is the best way we’ve found to snap him out of it.” “Snap frozen!” quipped David. “But won’t he get frostbite?” I asked. “Yeah,” David replied calmly, “there’ll be a bit of frost, but nothing terminal.”

After a few minutes Nick had come around. Now the only things chattering uncontrollably were his teeth. David said “The next step is to lay him on his bed for a while.” I helped Bob pick Nick up off the kitchen floor and we carried him through to what Bob called Nick’s recovery ward. “How’s this,” I mused, “a hospital bed onboard a luxury houseboat, which happens to be a floating recording studio. That’s so Pink Floyd!” “You’re damn right,” beamed Bob.”I think we’re finally getting somewhere!”

With everything that had taken place, David’s creative juices had indeed begun to flow. The next few days found him putting down some really great, Floydian-sounding ideas. Some drumming was needed on a couple of the pieces, and we tried every possible way to get Nick to play. Eventually we managed to coax him into the recording room, and sat him down on the drum stool, shaking. I stood behind him in case anything happened. The music started, but Nick sat completely rigid. Catatonic! He hadn’t even picked up the sticks. I grabbed them and put them in his hands, but as I did so he passed out! At least this meant he was now limp, so I held his hands and played the pieces through like a puppeteer!

( If you think some of the drumming on A Momentary Lapse Of Reason sounds a little stilted, now you know why.)

So we managed to make a start, but it was clear we couldn’t continue to do the drumming that way for long. And there was still a problem with a lack of other musicians to take the songs further. An idea came to me which was so way out that I wasn’t even going to mention it, until I heard Bob pacing up and down and saying, “What we need is a new idea. Some really way-out idea! Something too crazy to mention.” 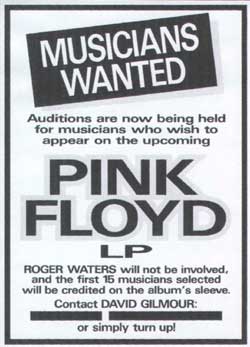 We placed the ad in an elite musicians magazine, and the response was overwhelming. We had some super players turn up. Tony Levin, Peter Gabriel’s bass player; John Halliwell, the sax player from Supertramp; powerhouse drummer Carmine Appice…. I felt like a kid in a candy store!

And of course there were scores of other great musicians who turned up as well, along with some very dubious types. There was a gazoo player, a guy who said he played “ant music”, and about seventeen Elvis impersonators ( one of whom bore a remarkable resemblance to Roger Waters. So much so, that when I pointed him out to Bob Ezrin and David Gilmour, he took off in a hurry ).

Others to turn up included Van Morrison, Cyndi Lauper, Joni Mitchell, Sinead O’Connor, Ute Lemper, Bryan Adams, The Scorpions and The Band, but none of these seemed to impress David in any way.

Still more arrived at Astoria. The Elvis impersonator who’d run away returned dressed as Michael Jackson, but still looked uncannily like Roger Waters. And he soon disappeared again when suspicious gazes were directed his way.

But arguably the most interesting pair to turn up was these two ..er… old freaks, I guess you’d call them. They introduced themselves as Juan Slipp and Downer Holwefall. One had a banjo, the other a saxophone. Somehow they seemed oddly familiar. We got talking to them… um, in a manner of speaking, and they told us that Syd Barrett wanted them to join Pink Floyd nearly twenty years earlier. Now, obviously, they felt their time had come!

David cracked up laughing, and left them with Bob and I. Bob politely told them that the quota of musicians had been filled, and that they just missed out. They were clearly disappointed, having had their hearts set on getting a credit on the new Pink Floyd release. 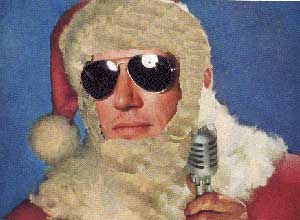 The banjo player started to speak, and as he did a tall character came up behind him, dressed as a very uncharacteristically-shaped Father Christmas. “We played on the last Roger Waters album,” the distraught banjologist spluttered, “but we didn’t get a credit on that either!” From behind, Santa blurted “That’s because what you played was such crap!” Then his eyes widened in horror as he realised his blunder. “Aha!” Bob Ezrin cried, “I knew it!” Santa bolted out a side door, dived into the river, and swam towards his sled with the gracefulness of a demented orang utan in a tumble dryer. As we watched him disappear into the distance, Bob said “Thank goodness I decided not to work on Radio KAOS.”

Meanwhile the stream of brilliant musicians who’d come through clearly energised David Gilmour. He wasn’t bothered in the slightest using other players on a Pink Floyd album. I didn’t find this at all surprising, as David had always been the one Floyd happy to fraternise with others in the industry.

Things moved along very freely from then on, and the music that was coming out sounded more and more like Pink Floyd all the time, and Nick Mason had progressed to the point of being able to hold a pair of drumsticks without freaking out or fainting. Still, for me, there remained one important ingredient missing. Richard Wright.

I sat David and Nick down one night and said, “Look, things are really taking shape now. But if you truly want the fans to recognise this work as Pink Floyd, I have an idea that would be the icing on the cake. Bring back Rick.”

The two looked at each other, then back at me. “Rick who?” “Wright! Richard Wright!!” I gasped. David leaned forward, and in a quizzical tone said “Bring back Rick… because…?” “Think of it,” I said. “Three members of Pink Floyd together on the same album. That’s as many as were on The Final……

( Woops! Remember Nick’s fragile state.) The F…. The um, you know. That last record… thingy ….Pink Floyd did…. Ooh look at that boat out there!” 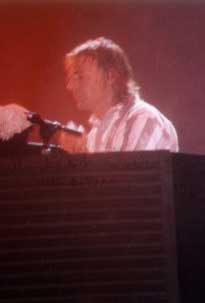 Unaware he’d narrowly escaped being sent into conniptions, Nick again turned to David Gilmour and said “What do you think?” David pondered for a moment, then said “You know what. That’s just crazy enough to work!”

Even though most of the keyboards were already done, Rick Wright came in to the project and did a few bits and pieces. Initially he was reluctant to return, for fear of being caught up in any legal wranglings with Roger Waters. And anyway, he certainly wasn’t in good playing form. Roger’s criticisms had squashed the confidence out of him too. In fact, all he was able to handle was a few rather static variations of his old Turkish delight. However it was enough to legitimately get his name on the credits. Importantly, he was there. Three out of four Floyds together, songs coming together, it was, as they say in the classics “all happening”.

It was approaching time for me to leave. I had a rather important matter to attend to back in Australia, and wouldn’t be around to see the final stages of the recording ( which would be taking place in the U.S.). But the last piece of the puzzle needed to be put in place before I left. That was the album cover artwork. I suggested that now that they had the sound right, they needed to ensure Floyd looked like Floyd. And the best way to do that was to get Storm Thorgerson back to shoot the album cover in his classic style. David and Nick agreed, & Storm was brought in immediately.

Unfortunately for Nick Mason, the first day Storm came to Astoria he brought with him copies of The Final Cut, and The Pros And Cons Of Hitchhiking so he could bag their pathetic covers. Nick, by this stage could probably have handled seeing one cover or the other, but seeing both at once was too much for him, and he collapsed on top of Storm. So it was back to the freezer, then back to his “hospital bed”.

But this was not all bad, because it provided Storm with an immediate theme for the cover artwork: Hospital beds on the water! There it was, right in front of him. An idea had literally fallen into his lap!

Not that he’ll admit that, though. I’ve heard him say that the idea for the beds came as a result of hearing a line in Yet Another Movie; “The vision of an empty bed”. I suspect he said that as a way of avoiding embarrassing Nick*, but the idea came before he’d heard a single note from the album. Mind you, he was pretty excited when he finally did hear that line, and commented on how well everything seemed to tie in.

With the idea in place it didn’t take much for Storm to fully develop it. I tagged along to the photo shoots, and had a bit of fun with it all.

By the time I headed back to Australia I was feeling very content, confident and excited about the forthcoming Pink Floyd LP. And held high hopes for an Australian tour to cap it all off.

*It wasn’t only Storm Thorgerson who was careful to hide the meaning and origin of the hospital bed motif. In an interview in 1988 with Australian music journo Richard Wilkins, David Gilmour declined to answer when asked about the significance the beds theme.

Richard Wilkins: “Is there any significance in the hospital beds and the beds sorta eh continuity through the thing?”

David Gilmour: “Oh , em er what should I say. What’s the best answer to that question?”

Richard Wilkins: “All right, we will leave it at that. Thank you.”

The Great Pig In The Sky ->