It wouldn’t surprise me if a survey found that Ummagumma – particularly the studio recordings – was the least played of all the Pink Floyd albums. It’s very experimental, and pretty tough going, let’s be honest. But it does provide some wonderful moments. And it also gave me and a friend of mine some fun late one night.

We hid in some parkland with a cassette player just outside a camping ground. Any time we saw a camper walking around the tracks we’d play Several Species Of Small Furry Animals Gathered Together In A Cave And………….. ah, you know the one I’m talking about. The looks on people’s faces ranged from quiet curiosity to outright terror! All these bizarre nocturnal noises emanating from the bushes. It was an absolute crack-up. Try it some time.

The album cover is a favourite of mine for a few reasons. Firstly, I love the repeating picture and the band members changing positions. Secondly, my signwriting skill was put to use with the polystyrene PINK FLOYD lettering on the floor ( which I’ll come back to shortly ). Thirdly, the placement of the Gigi record cover was both a prank I got away with, and ultimately prophetic. Allow me to explain.

I had cut out the foam PINK FLOYD letters and placed them on the floor as we set up for the photo shoot. Initially Roger was going to be sitting on the chair first, but as he got settled he clumsily crushed the letter “K”, leaving us with PIN FLOYD. We didn’t have time for me to rush back home and cut out another K, so we had to find some other polystyrene there and then.

To our surprise Roger, who was now feeling a bit of a goose, ( especially after I said to him, “You know you’re gonna have to pay for that K !” ) revealed he had some polystyrene in the van. So we went back to the van and Roger pulled out a slim, square cardboard parcel which was addressed to him. He opened it up rather sheepishly, reluctant to show me the contents. But there inside the parcel, sandwiched between two pieces of polystyrene, was the soundtrack album of the movie Gigi.

Using Nick’s pocket knife I re-cut the K. ( If you look closely at the album cover you’ll notice that the K is slightly thicker than the other letters.) But all the while I was wondering what the heck a guy like Roger Waters was doing ordering a copy of Gigi in the mail.

GIGI! It was hard to imagine an album further removed from the one Pink Floyd had just recorded. The irony of it really appealed to me. This big, tall, intimidating, heavy rocker harbouring a secret love of quaint French musicals.

The quirkiness of the whole idea got the better of me, and I snuck the album out of the cardboard parcel. As I positioned the K on the floor I quickly placed the Gigi album against the wall. The guys were so careful to stay away from the foam letters that they didn’t even notice the album sitting there.

I did catch Storm Thorgerson, who was in charge of the photo shoot, looking rather quizzically at Gigi. So I told him it was Roger’s idea to have it there.”Y’know, a bit of Floydian irony.” Storm thought it was brilliant!

Once the shoot was over I returned the album to its package, and wondered how I was going to handle Roger’s fury when the photos came back revealing his little secret. As it happens, it all worked out perfectly. Storm was so full of praise for “Roger’s quirky idea” that Roger, reigning in his instinctive violent reaction, cleverly played along with it.

Actually it was great theatre. Nick and Rick thought it was a classic piece of Rogerisation; Dave thought it was pretty bizarre, and couldn’t work out why Roger had kept it a secret; and at every opportunity Roger would glare at me and drag his finger across his throat. I’d just wink, give a thumbs up, and say “Brilliant, Rog. Brilliant!”

As most would be aware, having Gigi there did cause some hassles later on. Copyright issues in the U.S. necessitated the blanking out of the album, leaving just a white cover. Other issues, like the copy I have, show a blotchy patch where the record has been airbrushed out altogether.

But the thing I love most about the whole Gigi thing was that 35 years after his love of the French musical was uncovered, Roger finally got to do his own; Ca Ira.

I also had a bit of fun with the rear cover of the LP, with the picture of all Floyd’s equipment set out on the airport tarmac. As the gear was being placed in order on the runway, I snuck into the field off to the right of the picture with this sinister looking totem pole statue I’d picked up from an op shop. To my delight this went unnoticed by Storm and the guys.

This is one for those with the album on vinyl, as it’s too small to pick up on the CD cover. 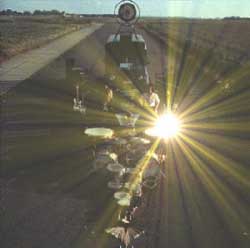 To find it, place a ruler on the rear left corner of the amplifier directly behind the chap on the right, then line it up with the rear left corner of the tall, skinny amplifier at the back. Measure back 3 and 3/4″ ( about 97mm ) and you should be able to see its stern face, and its feathered headdress leaning off to the right. Admittedly it’s difficult to see because its colour blends in with the background, but had it stood out any more it probably would’ve been removed from the shot.

The reason I brought along this character was because I could imagine him chanting “Umma-gumma” as part of some tribal ritual, and this brings me to my final comment on this topic: The origin of the term Ummagumma.

The generally accepted explanation for the origin of the title is pretty crass, but also untrue. The name came about on the way to a late-night gig in the north of England. As I was driving along, a fox ran out in front of the van and I had no chance of avoiding it. As I ran over it, the sound it made was ummagumma. ( You don’t have to try this one yourself. Just take my word for it. )

Someone said “Did you hear that? Sounded like “ummagumma”. And someone else said “That’d be a great name for an album.” It was as simple as that.

On the way back from the gig, surprise surprise, the fox was still lying there. Nick said “Look at that! What a strange place for a fox to have a snooze.” Roger sneered and said “At least it’ll be easy for the hounds to catch.”

But getting back to the name ummagumma, I did get to hear that sound again in a totally different situation. I was dragging an amplifier up a flight of stairs when it slipped from my grasp. The sound it made on the way down was umma-gumma-umma-gumma. ( In this case it was then followed by a sickening thud, and the sound of Roger’s voice saying, “You know you’re going to have to pay for that $@#!*/! amplifier.”)

So there’s a couple of explanations. But bear in mind the pronunciation is not umma-gumma

( as in “dumb and dumber” ), but oomma-goomma ( as in ….. er…… Sorry I can’t think of anything that rhymes with oomma-goomma. Then again, I’m saying this with an Australian accent, so you folks in other parts of the world will be none the wiser anyway! )