As the years passed by, my life eventually took some kind of orderly shape back home in Australia. But there was always this nagging discontent in the back of my mind over the bad terms on which Roger and I had parted company. David Gilmour, Nick Mason, Richard Wright and I had parted in unfortunate circumstances, yet on very good terms, and this gave me some comfort. But Roger……. 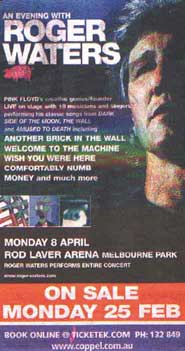 In early 2002 came the announcement of his Melbourne concert as part of his In The Flesh World Tour. I was filled with hope that this would provide an opportunity for me to get a personal apology to him, and try to smoothe things over.

So I began writing what, at first, was just a short letter. But as the concert approached, the letter ballooned out to a 29 page book.

The most difficult thing, of course, was going to be actually getting the book to Roger. My idea was to put the book inside an expensive box of chocolates and get a security person to hand it up to him at the end of the show. But I was told by one of the security guys that Roger was a little paranoid, and wouldn’t accept anything that was handed up like that. So I ate the chocolates and pondered my next move.

At the interval I went back to the security guard at the foot of the stage, to see if I could simply place the book on the stage, in the hope Roger would see it and take it with him afterwards. He said, “If I turn my back and you put it there while I’m not looking, I’m not gonna say anything.” Woo hoo!

So I put the book on the stage, just to the left of Roger’s microphone. I spent most of the second half of the show trying in vain to get Roger to look down to where the book was. But it was as futile as the time I tried to tell him his fly was undone at that Animals concert in ’77.

The show ended, and I hung around for a while in front of the stage. The equipment was being rapidly dismantled, and there was no sign of any significant tour personnel. The security guy said I might as well take the book back. Then another guy said “Roger’s gone. He’s off to Bangkok.” In a rare moment of clarity I decided to race to the airport myself.

When I arrived at the airport the Bangkok flight’s boarding lights were flashing. I hunted around the mostly deserted check-in floor and found an airport staffer who knew Roger’s flight, and he took the book through and gave it to a flight attendant there.

When the guy came back through the departure gates without the book I was absolutely stoked. Roger would read my letter, accept my humble apology, and contact me to express his forgiveness, I was certain. 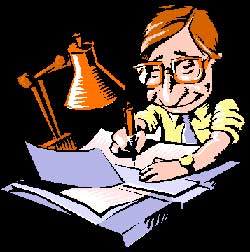 A few months went by with no reply. So I wrote a letter to Roger’s manager Mark Fenwick, just to find out, if nothing else, whether Roger had actually got the letter.

As you could imagine I was pretty disappointed. Especially because each of the letters to Mark Fenwick contained self-addressed envelopes with postal vouchers I’d paid for, so Mark wouldn’t even have to pay for any postage. He could’ve at least sent the vouchers back.

The worst part is, I have found since then that I can no longer enjoy Roger’s In The Flesh CD or DVD because of it. Whereas I should be able to watch the DVD and remember with fondness the show I went to see, I end up agitated and tense over Roger and Mark’s lack of response.

I don’t know. It just seems like, despite Roger’s new-found optimism, and more loving and empathetic attitude to his fellow man, he’s unable to extend those qualities to me. Then again, that shouldn’t have come as a surprise. Half the story of Pink Floyd revolves around Roger’s self-imposed alienation from another, far more famous former associate.