The moment I first logged on to A Fleeting Glimpse’s “The World According To Andy” I knew I was in trouble.

What started out as a simple cataloging of my offerings to a local newspaper, with the quirky use of Pink Floyd-related pseudonyms, instead became an inexorably complicated opening up of the proverbial Pandora’s can of worms!

I don’t know what I was thinking, sending Colin Turner photographs from my days with Floyd, when all he was after was my “R.R. Sharaduars”, “Malcolm Tudor-Masheens” and “F.I. Werra-Swanns” from the Herald Sun newspaper. 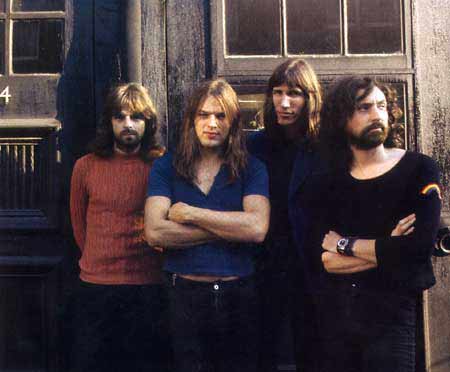 But I suppose I should have naturally expected Colin to include them on the web page. After all, here were, lobbed on his front doorstep ( in the rain ) by his lackadaisical postman, were snippets of Pink Floyd history that only a handful of people on earth knew anything about.

The problem is, the time that I spent with Pink Floyd was supposed to remain a tightly-guarded secret. This was always understood. And since the publication of the photographs on “The World According To Andy”, revealing my association with the band to the Floyd-loving world, I have received some emails from flabbergasted…. er….let’s call them former associates, demanding to know how I could possibly have allowed such a lapse of reason.

I do feel particularly bad about it all, especially for Nick Mason. As we all know, Nick has been working for several years on his book, Inside Out; A Personal History Of Pink Floyd. Some time ago he was about to have his book released, but David Gilmour stepped in and had it pulled. The reason was – contrary to whatever you may have heard previously – Nick was going to spill the beans about ME! His book featured a lot of detail about my involvement with Pink Floyd, my influence on the band, and…. well… some of the stuff-ups I’d caused along the way.

But David Gilmour wanted to keep my name out of the book, for various complicated legal reasons. ( And due to the embarrassing nature of some of the stories. ) These were reasons which he felt Nick was already aware of, and he thought Nick should have known better than to refer to me in any way.

So the book was pulled and subsequently re-written. But now, with the re-written version about to hit the bookshelves, a web page appears on the Net’s most popular Pink Floyd site revealing a character who will go completely unmentioned in Nick’s supposedly all-revealing biography. Sorry Nick.

The interest generated by the previously unseen pictures in “The World According To Andy”, and the endless stream of questions I’ve been asked since their publication, has left me with no alternative but to finally tell, once and for all, the story of my involvement with Pink Floyd, the greatest rock band of all.

In so doing, light will be shed on some aspects of Pink Floyd which will surprise many. Along the way I will give the stories behind some song lyrics and titles, and provide explanations for some of the famous incidents and stuff-ups which have occurred through Floyd’s history, which until now fans have known only very sketchy details about.

I won’t go as far as to announce “Forget everything you ever thought you knew about Pink Floyd”, but let me just say “prepare to look at Floyd with a new set of eyes”.

Oh, before I begin my series of bizarre confessions, here’s one for starters. In keeping with my use of made-up names, pseudonyms, or nom-de-plumes, “Andy McDonald” is not my real name either. It is actually Albert Magoolie. That’s right, my name’s Magoolie. You’ll find the reason for the name change as the story unfolds, if you can stick with it long enough.

But for the moment, I hope you enjoy this journey into the strange world of Pink Floyd, which will become just a little bit stranger as you read on. And once you complete the trip, I hope you can find it in your hearts to forgive me.

All Aboard For The England Tour ->