This was my first real stuff-up working for The Pink Floyd. We arrived at this gig one night, running a little late due to problems with the van. I hastily parked outside the venue and we heaved some of the drums, the organ and a couple of guitars inside. The guys started setting up, and I went back out to grab the rest of the gear.

The problem was, when I started to climb back into the van I noticed it wasn’t there! I looked around frantically and saw, off in the distance, the van hurtling backwards down the hill towards the river. I’d forgotten to engage the handbrake.

Oh no! What was I going to do? Make up a story of course – real quick! Meanwhile I could just make out the van coming to a sudden halt at the bottom of the road. Fairly safely, it seemed.

I bolted down the hill, knowing the Floyd guys would be coming outside wondering what the heck was going on. A million possible scenarios were racing through my brain at once, but I thought the safest bet would be to tell them the van was pinched. 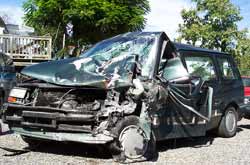 I got to the van, coughing, spluttering and gasping for breath, only to find all the equipment had been hurled out of the van on impact, straight into the river. The amps, which had only just been purchased, sank right to the bottom, while the remaining drums and a few acoustic guitars floated gently down the stream.

Things were going from bad to worse. I had to think and act fast. First I had to remove the van from the scene of the crime. So I drove a few blocks away and dumped it in a lane. Then I headed back up to the venue, tearing my shirt, ruffling my hair, and slapping myself about the face as I went.

When I got there, the guys were pacing around outside freaking out. And the venue’s manager was understandably irate. I explained that as I was getting the rest of the gear out, four very large thugs commandeered the van. I fought off three of them, but the fourth had an iron bar, knuckle dusters, a knife and a machine gun! Hesitating momentarily in the face of this armoury, the three then overpowered me from behind, and they took off in the van. I chased them as far as I could, but they got away.

The manager of the venue didn’t care what had happened, he just wanted the band inside and playing. “No amps?” he snarled.”You’re just gonna have to strum *&^#% hard!” 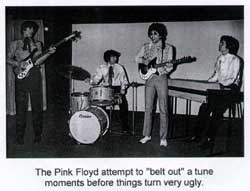 So the guys went inside, and bravely performed before a small crowd of, as it happens, very large thugs, hurling bottles, coins and abuse. A band renowned for their volume, this was not one of the Floyd’s more ear-splitting gigs. ( But with it they laid claim to performing the very first of what would later become known as “unplugged” concerts. Though of course these became far more popular with the use of acoustic instruments.)

The good bit, for me, was that the guys bought the “stolen” story. Although they didn’t buy the “four very large thugs” part. Roger reckoned I was probably overpowered by a couple of infirmed octagenarians. “How’d they do it, Magoolie?” he asked. “One trip you up with a walking stick, and the other run over you with their wheelchair?” “No, they spat their false teeth at him and belted him with their oxygen tank!” added Nick, who then claimed he could hear loud music emanating from the old folks’ home down the road.

Syd didn’t seem all that convinced either, though it was hard to tell what he was thinking. But Rick at least showed enough concern to ask how I was.

Years later, after David Gilmour joined the group, I secretly told him what had really happened. He thought it was hilarious, especially the fact that I’d gotten away with it. But not only that, he was so taken by the image of acoustic guitars floating down the river that he eventually used it in the filmclip for High Hopes.